Former Aberdeen striker Malcolm Kpedekpo says progress is being made against discrimination in Scottish football but admits there is “a long way to go”, as the Scottish FA launched its new equality framework.

The initiative – Football Unites – invites stakeholders at every level of the game to come together and deliver meaningful change which will ensure Scottish football is more reflective and representative of the country’s demographic.

The strategy was launched in Edinburgh by Kpedekpo, who is the Scottish FA’s independent non-executive board director, Pauline MacDonald, the Scotland Women’s U17 coach, and David McArdle, the Scottish FA’s Diversity and Inclusion Manager.

Football Unites aims to remove barriers to access and participate in football and a platform to educate the wider football community on the challenges and requirements for diverse groups to access the game, and allow their voices to be heard. 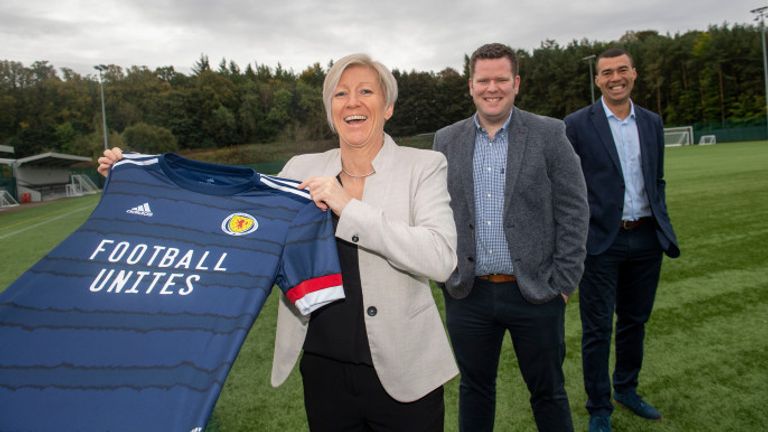 Kpedekpo said: “I suffered racism as a player and want to help bring about change to the game: there is no place for discrimination of any kind within football or indeed wider society.

“We are making progress in Scottish football but we have a long way to go and this framework will help us bring about more change to ensure our game is more representative from the boardroom to the dressing room and everywhere in between.”

“The Football Unites framework is a well-researched, tangible and ambitious document produced by a group of experts in this subject and we ask everyone involved in our game to support it.”

McArdle added: “The Scottish FA is committed to driving diversity and inclusivity at all levels of the game and this framework will be the catalyst to the next phase of our journey.

“Our aim is to ensure Scottish football is representative and reflective at all levels of the game, regardless of age, disability, gender identity, race, religion or belief, sex or sexual orientation.”

“This is a vital area of our national game and Football Unites will provide everyone within Scottish football with the tools required to create a safe and inclusive environment.”

What should happen next with VAR in the Premier League?