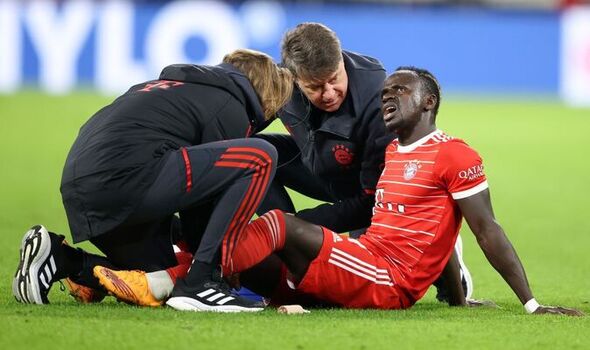 Bayern Munich assistant boss Dino Toppmöller has confirmed Sadio Mane is expected to be fit for the World Cup after picking up an injury problem in his side’s 6-1 win over Werder Bremen. Alarm bells were ringing in Senegal when their star man collapsed to the turf just under 20 minutes into the contest – which is Bayern’s penultimate fixture prior to the mid-season tournament in Qatar.

There has been a worrying trend in recent weeks and months with a series of players now set to miss the World Cup after sustaining injuries with their clubs.

However, thankfully for Senegal, Mane will seemingly be okay despite limping off at the Allianz Arena.

Toppmöller said after Bayern hammered Werder: “He got hit in the leg, which caused a little nerve pain. Nothing too serious. His participation in the World Cup shouldn’t be in jeopardy.”

Mane is yet to post on social media following the match as Senegal supporters eagerly await some positive news.

It’s highly likely that Mane would have been able to carry out against Werder, however, both Bayern and the player were not prepared to take any risks so close to the tournament.

Head coach Julian Nagelsmann said after the game: “I didn’t see him after the game, I hope it’s not a big injury. But I don’t know at the moment. We’ll see tomorrow and then give an update.”

Ex-Liverpool forward Mane actually booked his nation’s place in Qatar when he struck the winning penalty for his country in the World Cup play-off against Egypt.

He was also the hero against the Pharaohs in the Africa Cup of Nations final shootout as Senegal look to build on their success in Cameroon last February.

Senegal kickstart their Premier League campaign on Monday, November 21 when they take on Netherlands in their Group A opener.

Mane’s side then face Qatar and Ecuador as they look to book their place in the knockout stages – something they failed to achieve in Russia in 2018.

Bayern’s victory over Werder put them four points clear at the top of the Bundesliga as they finally took control of the title race following a difficult start to the season.

Surprise runaway leaders Union Berlin have now suffered the dip many were expecting after taking just three points from their last three matches – losing 5-0 to Bayer Leverkusen in the process.

Nagelsmann’s side have now accumulated 31 points from 14 matches with SC Freiburg sat in second on 27 points from 13 matches – meaning they have a game in hand on leaders Bayern.

The defending champions travel to Schalke on Saturday with Mane expected to sit out of the trip as he now focuses his efforts on being fit for the World Cup.

Unlike the Premier League, the Bundesliga does not return to action until late January (Jan 20) due to their normal mid-season winter break.

What happened to Tanguy Ndombele in training after Jose Mourinho criticism