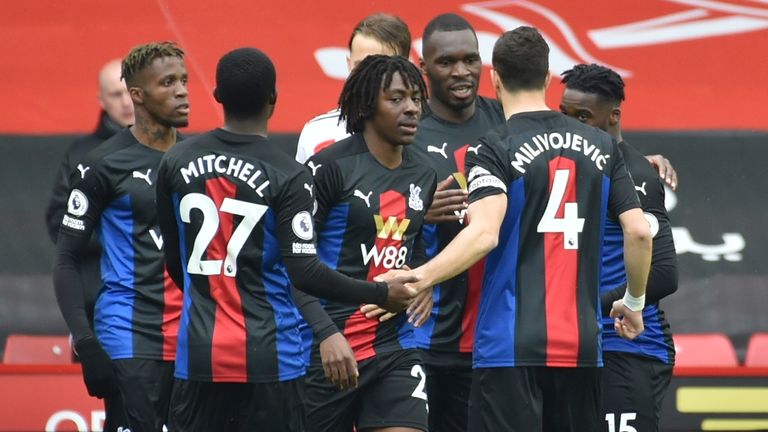 Crystal Palace rubberstamped Premier League survival and ended a winless run of five games with a 2-0 victory at Sheffield United.

Christian Benteke’s deflected shot after just 67 seconds belied Palace’s dominance against a long-beaten side who failed to muster an effort on target all afternoon.

Benteke was denied from close-range by a fine first-half Aaron Ramsdale save, before drilling against a post after the break, but a belated second finally came through the impressive Eberechi Eze (88) as the Eagles eased past the 40-point mark and made sure of an eighth successive season in the top flight.

Sheffield United, whose own long-sealed relegation was followed in the day earlier by that of rivals Sheffield Wednesday from the Championship – the city’s first double drop in the same season – never truly threatened to punish Palace’s profligacy as they recorded a 28th league defeat of a tortuous season.

How Palace brushed aside longbeaten Blades

Sheffield United had edged Roy Hodgson’s side at Bramall Lane on the opening day of last season, a result that provided crucial early momentum, but another leaden display was a reminder of their striking slump.

Hodgson had urged his players to “take risks” against the basement side with their position all-but mathematically secure and they were ahead with a little over a minute on the clock.

Eze sidetepped Kean Bryan and then John Egan, before teeing up Benteke for a first-time finish that clipped Baldock to wrong-foot Ramsdale.

The former QPR player had been allowed to swagger through unopposed when the sides had met back in January and he was full of elegant movement here again as home shirts backed off in the pouring rain.

He drilled one free-kick chance into a Blades wall, before Luka Milivojevic went close from another set-piece, his fierce drive taking another deflection but this time into Ramsdale’s gloves.

The hosts had offered only fleeting threat through a series of long diagonals but, as so often this term, the final ball remained elusive, David McGoldrick and Oliver Burke sending weak headers wide.

Egan had a chance after the break, controlling the ball awkwardly on his chest before lashing well over, while fellow defender Chris Basham did the same at the near post soon after, but Vicente Guiata was never properly tested.

Benteke, teed up by Eze, rattled an upright from angle shortly before the hour mark and substitute Jordan Ayew went close with an effort that Ramsdale parried smartly.

But a second that both Eze and Palace richly merited came two minutes from time, the forward too easily riding a John Lundstram challenge at the touchline, before driving goalwards and unleashing a shot that nicked off Fleck.

Hodgson’s future at the Palace helm may still be unclear but his side’s Premier League status is secure once again.

Sheffield United travel to Everton next Sunday for a 7pm kick-off, before a midweek visit to Newcastle on Wednesday May 19 – live on Sky Sports – and then a Premier League farewell at home to Burnley on Sunday May 23.

Palace face two double gameweeks before the season’s conclusion, heading to Southampton on May 11, before hosting Aston Villa on May 16, with both games live on Sky Sports. They face Arsenal at home on May 19 and finish at Liverpool.