There are nights like these – touchlines like these – when somebody at Opta surely must seriously debate the mileage in tracking distance covered by managers.

Diego Simeone (8km) would not look out of place on one of their post-match stat packs – and that estimate is probably a little conservative in hindsight. Simeone was everywhere, everywhere but his own designated technical area.

It is never hard to see why Atletico Madrid are far greater than the sum of their parts under the Argentine. Irrespective of personnel in any given season, Atletico’s are a squad of players who punch up and bloody gilded noses. Just not on this occasion. 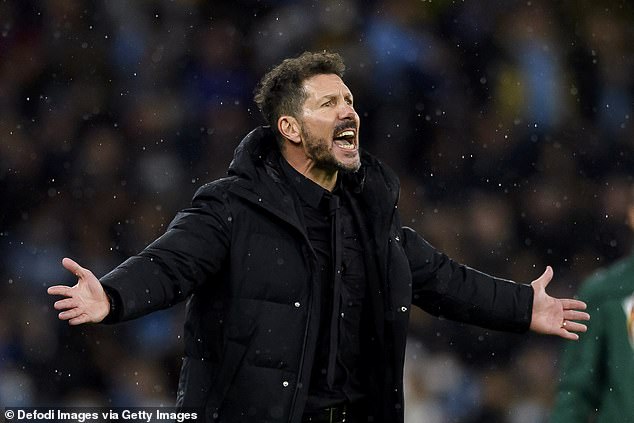 They were frustrating Manchester City from the off, however. Pep Guardiola watched his midfield – particularly Rodri – cede possession far too often when City needed to build pressure by drawing out the low block. And those lapses were largely Atletico’s doing.

City’s support started signposting towards timewasting from Jan Oblak within the first five minutes and it was always going to be that way.

When no stoppage time was forthcoming at half-time, Guardiola turned to his bench aghast before darting down the tunnel.

The City boss was fidgety, as is often the way, but his opposite number is in a completely different realm.

Dressing in the trademark all black, Simeone remained a good 15 yards down the touchline for much of the opening period, either coaching and micromanaging. 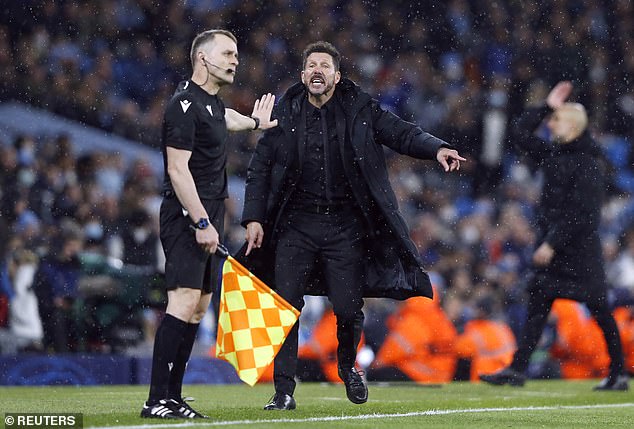 The Argentine manager was everywhere, everywhere but his own designated technical area 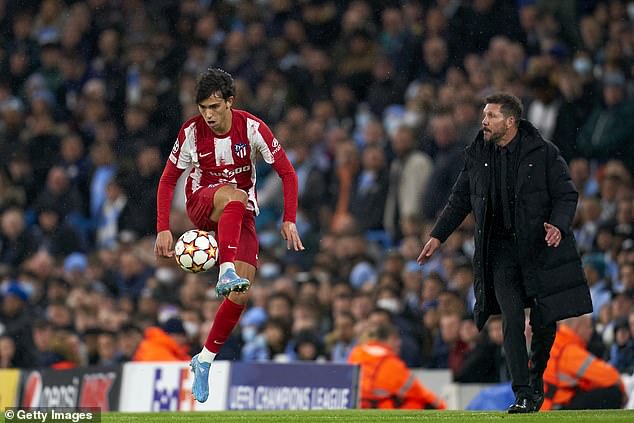 His stubborn Atletico Madrid side frustrated hosts Manchester City from the off, with the likes of Joao Felix (left) and Antoine Griezmann waiting to pounce on mistakes made by the hosts

Or just merely bemoaning the very existence of referee Istvan Kovacs. Either to the man himself or his fourth official. Guardiola, with enough to worry about himself, could only glance across quizzically.

Maybe Guardiola was onto something with Simeone in his press conference on the eve of this quarter-final.

When mocking those who criticise him for overthinking Champions League knockout ties – ‘I love to overthink and create stupid tactics,’ delivered with a smirk and glint in the eye – he claimed that an inspirational tactical change for this first leg would be to field 12 players.

Frankly, it was almost as if Atletico had. Simeone kept going, somehow not stepping over that white line and encroaching. He can be quite distracting, fixed in a trance, yet his players manage to ignore the histrionics. 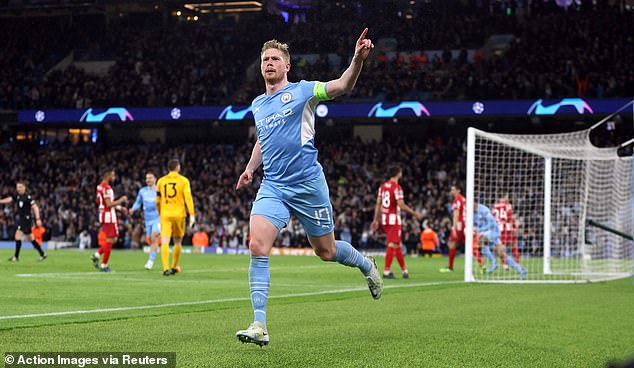 But it was Kevin de Bruyne who eventually got the winner, with City working hard for their win

City needed patience – as they so often do when teams arrive here and play in much the same way as the LaLiga champions. This was in effect no different to any given Saturday at the Etihad, albeit with a far greater threat from the opposition in behind.

Joao Felix and Antoine Griezmann waited to pounce on any mistakes. More were forthcoming than Atletico would have dreamed of inside the Lowry Hotel the night before but the visitors were not capitalising on the break.

So they decamped to their own third. And could not hold out. Guardiola’s big overthink was to revert Kevin De Bruyne back to a central striker, as had served City so well in the knockouts last year, and the tried and trusted eventually did the trick.

Is Manchester United vs Watford on TV tonight? Kick-off time, channel and how to watch FA Cup fixture

Watford confirm appointment of Vladimir Ivic as their new manager