Home » Soccer » Socceroos player ratings: How Australia fared in the loss to France

Graham Arnold’s Socceroos sit at the bottom of Group D after a 4-1 loss to France in their opening match at the World Cup in Qatar.

The jubilation at Craig Goodwin’s early opener proved short-lived after the reigning world champions scored two of their own on each side of the half-time break, meaning Australia will likely have to win their remaining two games against Tunisia and Denmark to ensure progression to the knockout stages.

Maty Ryan: 5/10
Made a couple of strong saves and couldn’t really be held at fault for any of the goals scored by France. However, he perhaps could have done better in organising the rattled defence in front of him, and in choosing to play out when they did for the second goal, instead of going long or looking elsewhere.

Nathaniel Atkinson: 3
A night he’ll want to forget. As a more attack-minded full-back, it’s questionable whether he was ever the right choice for this game, but who’s to say anyone else wouldn’t have been torched the same way by Kylian Mbappe? Threw his body around well to block a few shots but France’s second goal was on him and his heavy touch, an unacceptable mistake at this level which was duly punished. Hopefully he will learn from this.

Harry Souttar: 5.5
Had the secondary assist for Australia’s goal with a lovely diagonal dime-piece ball for Mathew Leckie, but never presented the threat he needed to at attacking set-pieces, and was beaten in the air more than a few times going back the other way.

Kye Rowles: 4.5
Looked out of his depth for the first time in his short international career. He and Souttar sat far too deep, but that’s easy to point out and probably harder to avoid when you’re staring down what they did. Admitted afterwards he was nervous, and it showed. 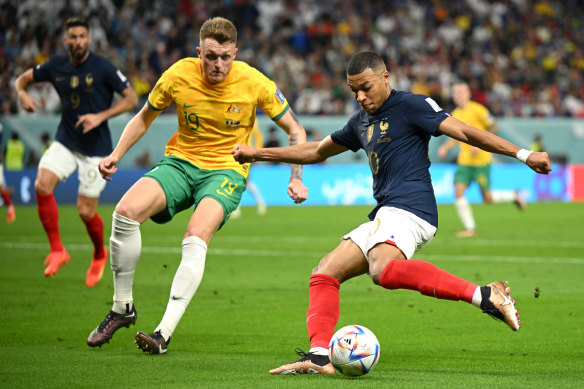 Harry Souttar was instrumental to Australia’s first and only goal against France.Credit:Getty

Aziz Behich: 4.5
Given an absolute bath on the left by Ousmane Dembele, right from the opening minutes. Made a terrific goal-line clearance, was strong in the scramble and had some good moments going forward, but was otherwise eaten alive.

Aaron Mooy: 5
A fair way short of his best, which the Socceroos needed him to be at to have any chance. Looked uncharacteristically rusty against a young, energetic French midfield eager to make their names in the absence of Paul Pogba and N’golo Kante. Lost his footing after a strong opening.

Jackson Irvine: 5.5
Came oh so close to drawing Australia level at 2-2 with a header that clipped the post. Never stopped working hard in a midfield that was soundly beaten, but didn’t really offer much other than toil and bubble.

Riley McGree: 5
Deputising for Ajdin Hrustic, who wasn’t used off the bench. Certainly turned in a one-note performance in comparison to what the man he was replacing is capable of, but crafted the chance for Irvine out of nowhere. 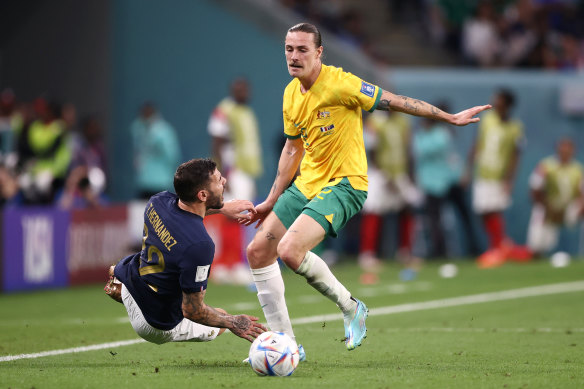 Jackson Irvine had a sensational chance to get the Socceroos back in the game.Credit:Getty

Mathew Leckie: 6
When Martin Boyle was ruled out of the tournament, Leckie’s importance to the cause intensified, and he did his bit by jinking past Lucas Hernandez to set up the goal but otherwise struggled to take the ball forward on the dribble.

Mitch Duke: 5
Barely had a sniff; he touched the ball just 16 times, the lowest amount of any starting player for Australia, and managed just one shot, from long range, which just missed. Not much he could do with service lacking. Dragged early in the second half as Arnold sought to change things up.

Craig Goodwin: 7
Etched his name into Australia’s history books with the nation’s first goal from open play at the World Cup in more than eight years. His strike was well taken and his passing was generally accurate. Can hold his head up high.

Jason Cummings: 4.5
Just as Duke experienced, it’s hard to shape a match as a striker when your team doesn’t have the ball, which he saw only eight times in more than half an hour. Tunisia will be his great litmus test, if used.

Garang Kuol: 5
Became Australia’s youngest ever World Cup player and the ninth-youngest in history to grace this stage. Hopefully it’s only the start — for the first time, he looked a bit like a deer in the headlights.

Awer Mabil: 5
Tried to do what he could in his 17 minutes on the park. Intent was there, as always.

Watch every match of the UEFA Champions League, UEFA Europa League and UEFA Europa Conference League on Stan Sport. Returns for the Round of 16 in February 2023, with all matches streaming ad-free, live and on demand.