St Johnstone 2-2 Rangers: Stevie May strikes late to secure a point for Saints as visitors’ fading title hopes are dealt another blow in Premiership draw

If, come May, Rangers are left to reflect on where it all went wrong for their Premiership challenge, the inquest will be short and to the point.

In three league outings since the turn of the year, Steven Gerrard’s men have taken just one point from nine.

This share of the spoils in Perth may not have been quite as costly as the previous losses against Hearts and Kilmarnock. 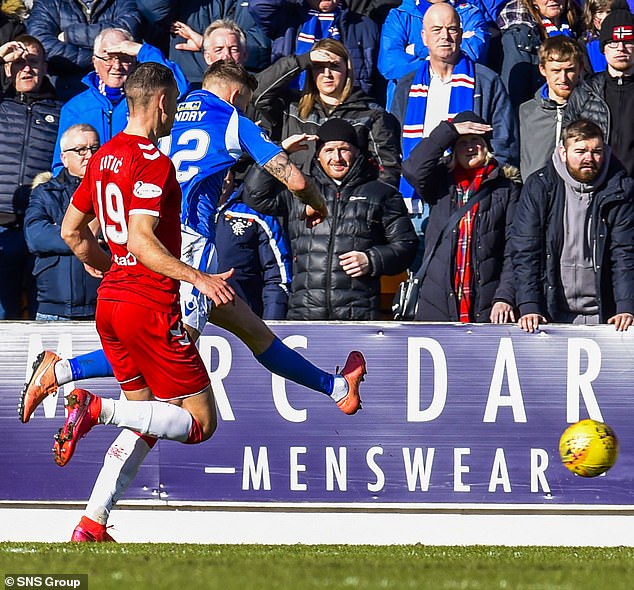 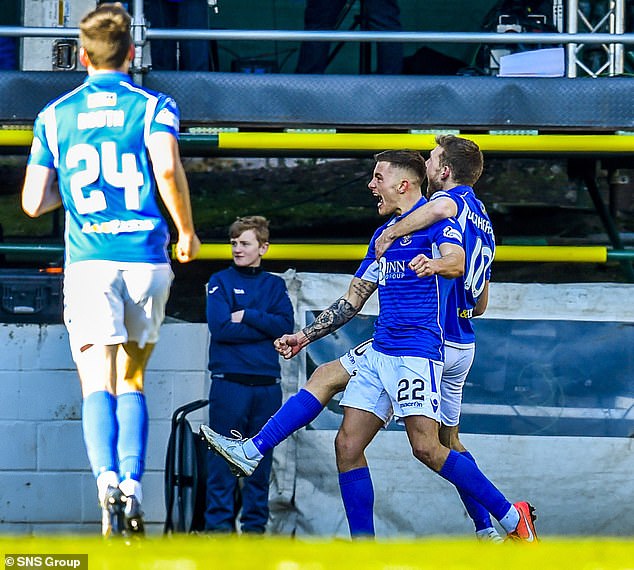 But for the support who again returned to Glasgow in somber mood, it felt every bit as grim.

A goal down at the break after Callum Hendry struck inside eight minutes, the introduction of Flo Kamberi appeared to give the visitors the spark they needed to ensure a lamentable run on the road didn’t continue.

The Swiss scored a sumptuous equaliser then set up Joe Aribo as Gerrard’s men moved ahead.

The Ibrox side would not see this one over the line, though. Defensively uncertain throughout, they allowed Stevie May to level the match with 10 minutes remaining. It was no more than the home side deserved. 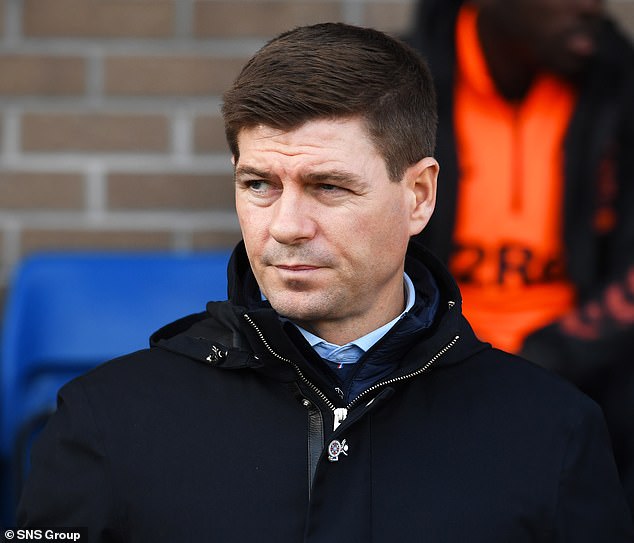 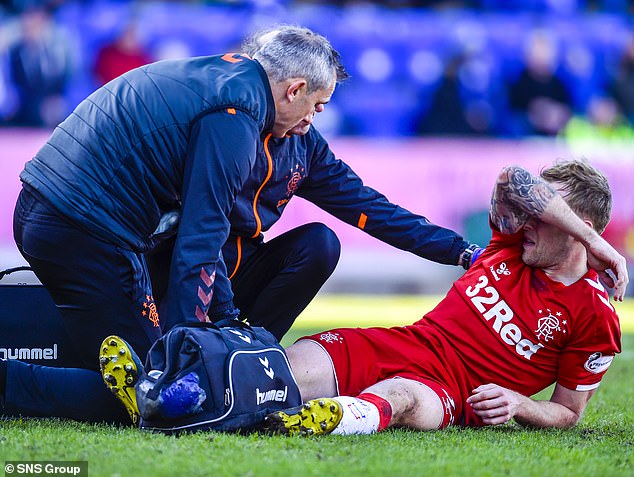 For all of Rangers’ unpredictable form since the winter break, there was no disguising the scale of the task facing Tommy Wright’s side here.

Not since an emphatic 4-1 win in March 2010 had they beaten the Ibrox side in Perth, with just one draw claimed in the subsequent 10 matches.

The St Johnstone manager introduced Tony Ralston, Hendry and Callum Booth to the side which drew with Ross County last time out. Liam Gordon, Scott Tanser and Chris Kane all made way. 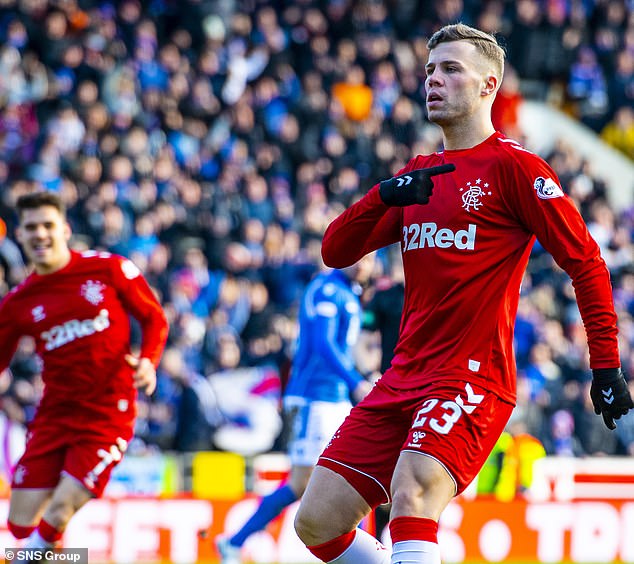 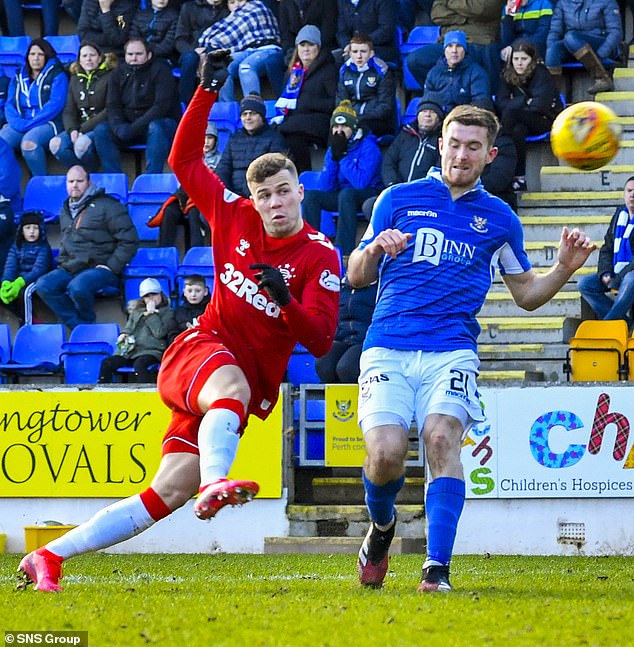 The Swiss forward, who is on loan from Hibernian, strikes in the 50th minute to revive Rangers

McDiarmid Park was bathed in sunshine but the effects of the recent stormy weather were evident in a rutted surface.

Rangers simple didn’t get to grips with the underfoot conditions, falling behind inside eight minutes.

It stemmed from Allan McGregor’s long clearance up the field. David Wotherspoon knocked the ball back with interest. May’s headed flick caught Nicola Katic dreaming. Hendry took charge of the situation and bulldozed his way towards goal with the Croatian struggling to make up the ground.

Still with much work to do, he took two touches to steady himself before clipping a low shot under the advancing Allan McGregor. It was not the start Gerrard had wanted. 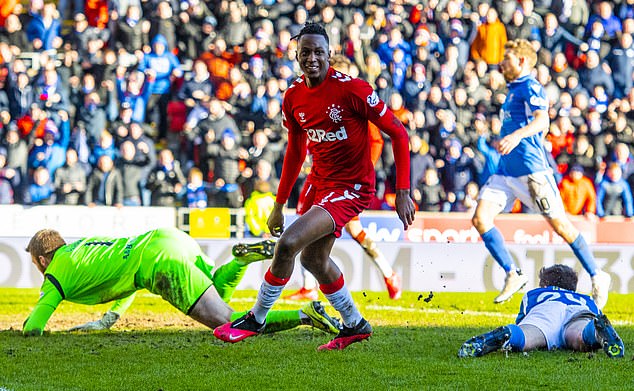 Joe Aribo, also introduced as a substitute, arrives first in the penalty area to put Rangers ahead 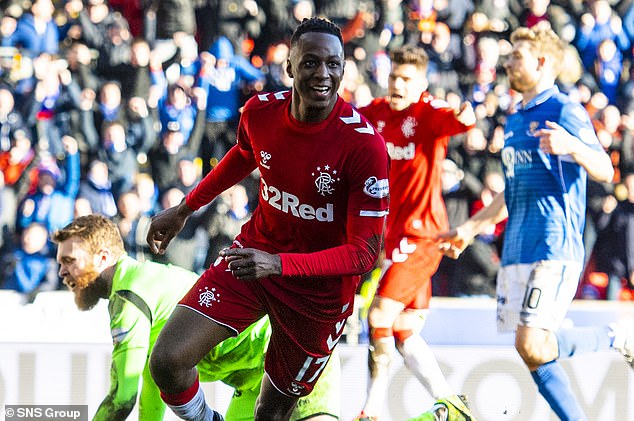 Katic, who had already dumped a decent chance in the side-netting at the other end, struggled with the basics as the game settled and he was by no means alone.

Matt Butcher forced McGregor into a smart stop after sensing uncertainty in the visiting back-line, Hendry having already asked a question of the Rangers keeper with an angled drive.

Rangers’ response to falling behind came through Ryan Kent dropping a shoulder on the left and firing a stinging strike into Zander Clark’s arms.

The Saints keeper then tipped Ryan Jack’s dipping effort onto the roof of his net before Halliday wasted a decent chance after he popped up on the edge of the box. 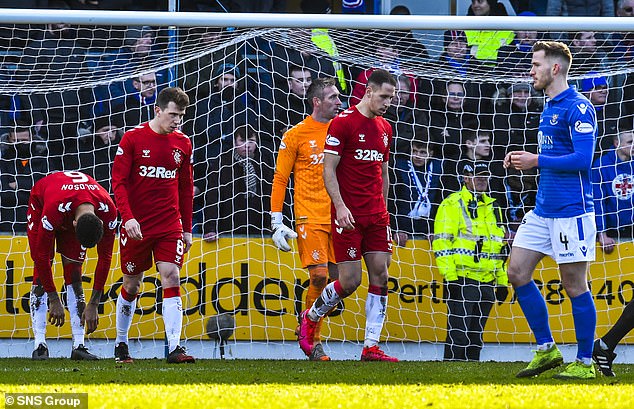 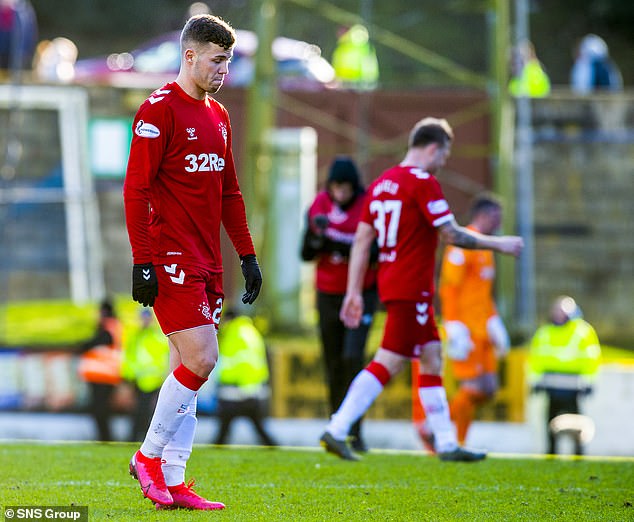 Yet the home side were not without their moments. Good work by Weatherspoon afforded Jamie McCart a chance 12 yards from goal. The defender’s failure to hit the target was a classic case of right place but wrong man.

As the first groans were heard in the three stands housing the visiting supporters, Gerrard badly needed a spark. Aribo threatened to provide it with an enterprising run through the right channel which saw him link up with Scott Arfield. The midfielder got his shot away but was falling as he did so. Clark mopped up.

Saints’ defending in the opening half was everything Wright would have demanded. When Aribo then played in Alfredo Morelos eight yards out, Jason Kerr slid in to produce an outstanding block. 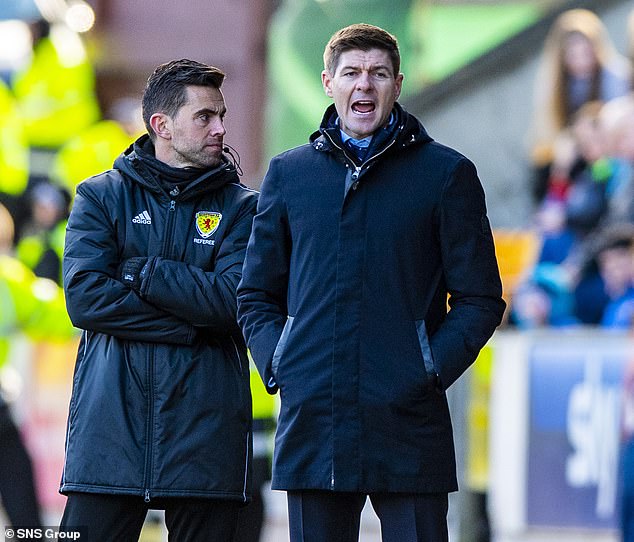 The last five minutes of the first period was all Rangers. First, James Tavernier’s shot was fumbled by Clark. McCart hacked the ball off the line. Aribo was next to try his luck from 10 yards. Another McCart block maintained Saints’ slender advantage.

Gerrard simply had to change it at the break. Halliday was replaced by Kamberi with Aribo dropping to left back.

Within five minutes, the gamble had paid off. Tavernier’s cross from the right found the Swiss lurking just inside the box. What a finish he produced with his right foot – a flashing strike that whistled beyond Clark. Not a bad way to claim your first goal of a loan spell.

Man of the match: Stevie May

Saints were left to rue one that got away just before the leveller. Drey Wright’s sprint into the box preceded a drive which Connor Goldson stabbed to safety.

Rangers’ tails were now up. Tavernier should have done better than smash Kent’s cross over the top. Clark was then the equaliser of Morelos’ shot on the turn.

For all that, Gerrard still had McGregor to thank for ensuring the game stayed square, the keeper’s big toe preventing Tony Ralston’s effort from an acute angle finding the far corner.

Clark was equally as sharp at the other end to prevent Kamberi claiming his and Rangers’ second after Kent’s probing pass.

But Saints’ resistance was broken 19 minutes from time. Kamberi had looked up to the task from the minute he took to the field and his spin on the left bamboozled Jason Kerr and opened the game up. Bounding forward from his new station, Aribo swept home a perfectly weighted cross.

Rangers’ defending never convinced, though. And when Wright’s men won a corner with 10 minutes remaining, Gerrard cut an agitated figure – and with good reason.

Wotherspoon’s centre asked a question that neither Goldson or Katic answered. May spun on a sixpence and thumped a low shot home. It would have been hard to begrudge the Perth men a share of the spoils.

For the Rangers support, such days on the road are becoming wearyingly familiar.