The breakaway European Super League is on its knees just two days after its launch after the Premier League’s ‘Big Six’ confirmed their departure from the breakaway competition amid a fierce fan backlash.

Less than 48 hours after confirming their intent to move away from Uefa’s Champions League and redefine the structure of European football, all six English clubs (Arsenal, Chelsea, Liverpool, Manchester United, Manchester City and Tottenham) were forced into an embarrassing climbdown, while The Super League itself stopped short of admitting outright defeat, or even an apology, but said that it would “reshape the project”.

“Despite the announced departure of the English clubs, forced to take such decisions due to the pressure on them, we are convinced our proposal is fully aligned with European law and regulations,” the league said in a statement.

“Given the current circumstances, we shall reconsider the most appropriate steps to reshape the project, always having in mind our goals of offering fans the best experience possible while enhancing solidarity payments for the entire football community”.

Follow all the latest below as we will bring breaking news, reaction and analysis through the day on this seismic story for European football.

Uefa President Aleksander Ceferin has vowed to ‘rebuild the unity’ after the six Premier League clubs walked away from the European Super League.

And now Ceferin has welcomed their move to correct a “big mistake” and is now focused on “moving forward together”.

“I said yesterday that it is admirable to admit a mistake and these clubs made a big mistake,” read a statement from the Uefa chief.

Uefa President Aleksander Ceferin has vowed to ‘rebuild the unity’ after the six Premier League clubs walked away from the European Super League.

And now Ceferin has welcomed their move to correct a “big mistake” and is now focused on “moving forward together”.

“I said yesterday that it is admirable to admit a mistake and these clubs made a big mistake,” read a statement from the Uefa chief.

“But they are back in the fold now and I know they have a lot to offer not just to our competitions but to the whole of the European game.

“The important thing now is that we move on, rebuild the unity that the game enjoyed before this and move forward together.”

Manchester City were the first club to officially confirm its intent to leave the European Super League after Chelsea’s intent was widely reported.

Their short statement read: “Manchester City Football Club can confirm that it has formally enacted the procedures to withdraw from the group developing plans for a European Super League.”

Liverpool’s statement read: “Liverpool Football Club can confirm that our involvement in proposed plans to form a European Super League has been discontinued.

“In recent days, the club has received representations from various key stakeholders, both internally and externally, and we would like to thank them for their valuable contributions.”

Chairman Daniel Levy said: “We regret the anxiety and upset caused by the ESL proposal. We felt it was important that our club participated in the development of a possible new structure that sought to better ensure financial fair play and financial sustainability whilst delivering significantly increased support for the wider football pyramid.

“We believe that we should never stand still and that the sport should constantly review competitions and governance to ensure the game we all love continues to evolve and excite fans around the world.

“We should like to thank all those supporters who presented their considered opinions.”

Manchester United will not be participating in the European Super League.

We have listened carefully to the reaction from our fans, the UK government and other key stakeholders.

We remain committed to working with others across the football community to come up with sustainable solutions to the long-term challenges facing the game.

The last few days have shown us yet again the depth of feeling our supporters around the world have for this great club and the game we love.

We needed no reminding of this but the response from supporters in recent days has given us time for further reflection and deep thought.

It was never our intention to cause such distress, however when the invitation to join the Super League came, while knowing there were no guarantees, we did not want to be left behind to ensure we protected Arsenal and its future.

As a result of listening to you and the wider football community over recent days we are withdrawing from the proposed Super League. We made a mistake, and we apologise for it.

We know it will take time to restore your faith in what we are trying to achieve here at Arsenal but let us be clear that the decision to be part of the Super League was driven by our desire to protect Arsenal, the club you love, and to support the game you love through greater solidarity and financial stability.

Stability is essential for the game to prosper and we will continue to strive to bring the security the game needs to move forward.

The system needs to be fixed. We must work together to find solutions which protect the future of the game and harness the extraordinary power football has to get us on the edge of our seats.

Finally, we know this has been hugely unsettling at the end of what has been an incredibly difficult year for us all.

We have heard you.

As reported earlier this evening, Chelsea Football Club can confirm that it has begun the formal procedures for withdrawal from the group developing plans for a European Super League.

Having joined the group late last week, we have now had time to consider the matter fully and have decided that our continued participation in these plans would not be in the best interests of the Club, our supporters or the wider football community.

‘A toxic endeavour’: How Super League went from breakaway to breakdown

As the news spread around boardrooms, and some ashen-faced officials realised the European Super League project was starting to collapse, the true meaning of it all could – fittingly – be seen on the streets and among the people.

Thousands of Chelsea supporters had gathered around Stamford Bridge to vociferously protest the plans when it suddenly went quiet. Shortly before 7pm, the word came through that the club were preparing to withdraw from the project.

The reaction was a moment to behold. It was celebrated as joyously as any goal, but it was really so much more. It was a victory.

It was a testament to the power of fans, given Manchester City and Chelsea were so convinced by the emotion of their own supporters.

It was also the start of one of the most remarkable single hours the game has ever known, a whirlwind of sensational developments that brought a staggering three days to a head. 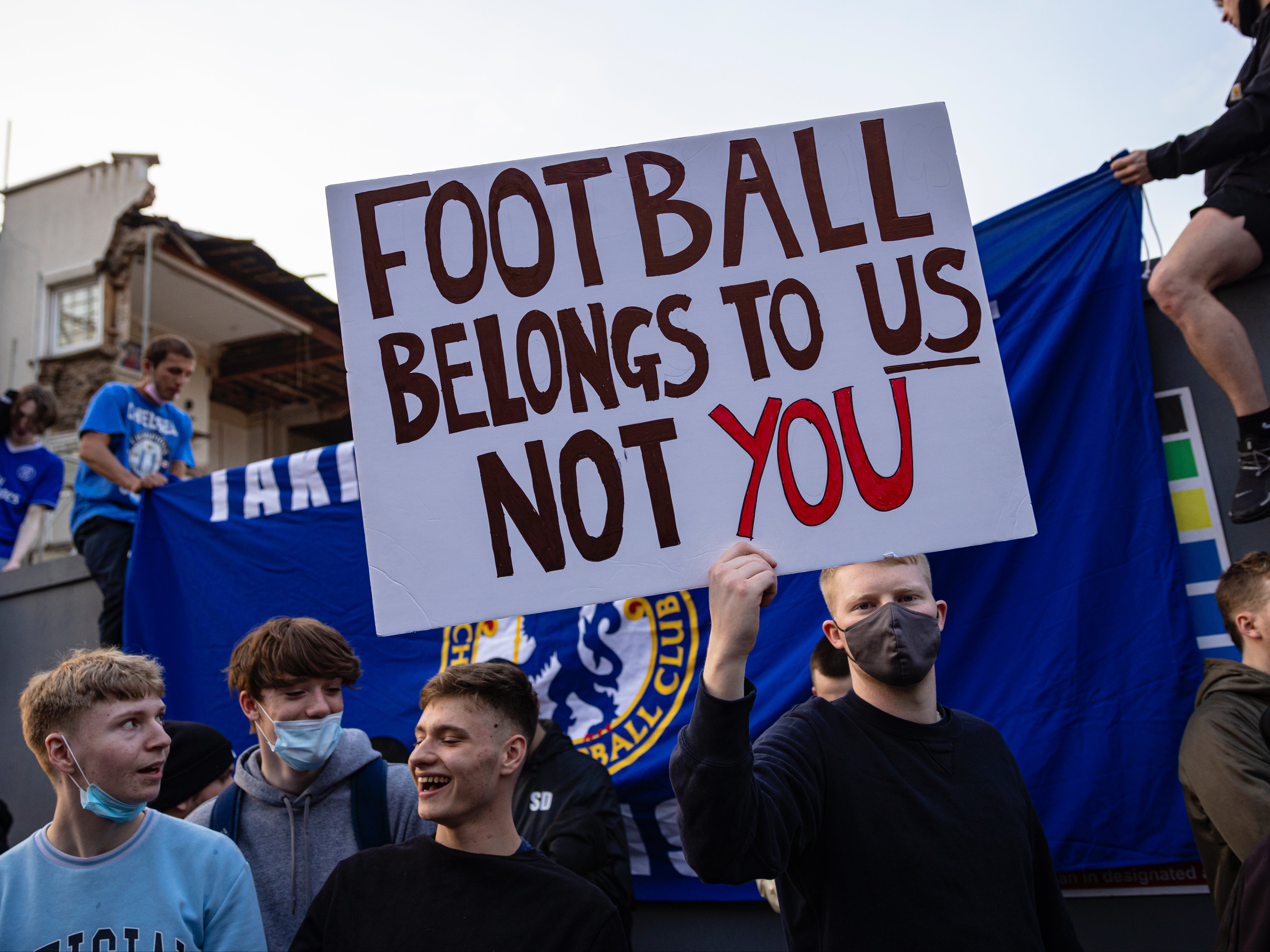 ‘A toxic endeavour’: How Super League went from breakaway to breakdown