Home » Soccer » The best World Cup that money can buy, but at what cost?

Doha: The difference between Qatar as host of the 2022 World Cup and Australia as a participant is that Australia submitted to, and narrowly survived, a rigorous and transparent process to qualify.

Australia earned its way, Qatar bought in. In the 12 years since it won hosting rights, 16 of the 22 FIFA executive committee members who made that decision have been investigated or implicated in some form of corruption or malpractice. 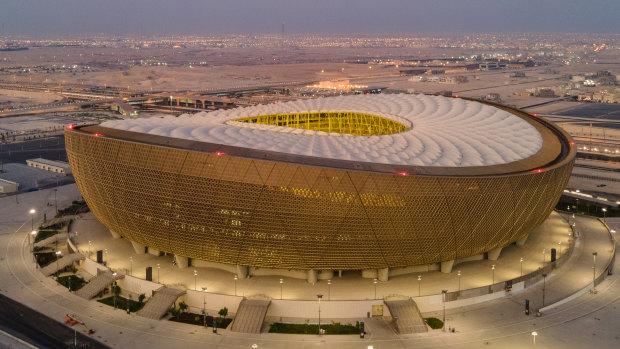 Lusail Stadium, where the World Cup final will be played.Credit:Getty

At an estimated cost of $300 billion, this is by far the most expensive World Cup in history. It might chagrin Australians as gas prices pinch at home to remember that much of Qatar’s vast wealth comes from natural gas. Qatar is the biggest per capita producer in the world.

Not coincidentally, it is also fourth in the world for per capita income. But it is unevenly distributed; it only takes a short time here to work that out.

With that monumental kitty, this miniscule and once poor British protectorate has built a striking set of stadiums and an environment that, when filtered through the television lenses over the next month, will wow the watching world, but also paid for the well-practised blind eye of FIFA and that wider world to myriad and flagrant human rights abuses.

Most have been well documented lately, including the near and deadly enslavement of millions of migrant workers who built the stadiums and a host of other infrastructure, the subjugation of women – who must still gain the permission of their male guardians to marry – and the demonisation of gays. Recently, a former Qatari international who is an ambassador for the World Cup called homosexuality a “damage in the mind”. 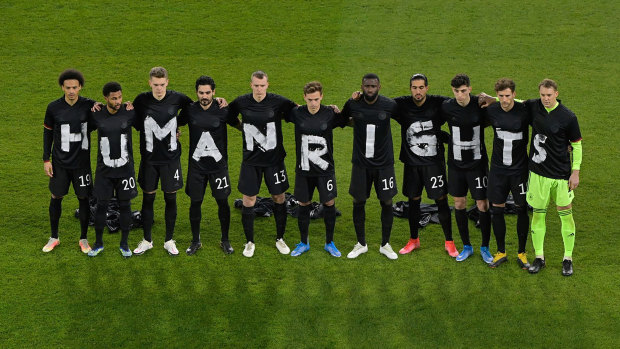 The German soccer team stage a protest at the start of their World Cup qualifier against Iceland in March.Credit:AP

Qatar doesn’t have a national women’s team. It set up one up in 2010 to put an enlightened face on its World Cup bid, but it rarely played and has not been seen at all since 2014.

Players around the world are discomfited even as they are excited. The Socceroos spoke up en masse and some European teams are planning to wear armbands during the tournament to highlight their misgivings.

Some recent whitewashing – easing draconian labour laws, for instance – have assuaged few. Everything is a shade of white here anyway. 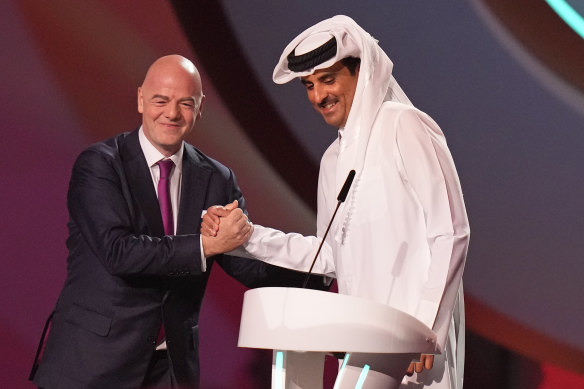 FIFA’s response was classically hypocritical. One day, president Gianni Infantino was holding up the World Cup as an event that can unite the world and urging for it to be the pretext for a ceasefire in Ukraine and the opening up of humanitarians channels there. Yet days before, he had written to all competing countries to them “not [to] allow football to be dragged into every ideological or political battle that exists”. In other words, mention only the war.

Oddly enough, Qatar as host and Australia as guest have the same mission: to win over sceptics. That the Socceroos are in the finals for the fifth time in a row is sincerely its own achievement, hailing as they do from a country so divided in its affections between football codes. Italy is not here, nor is Colombia or Peru, to name but some who fell by the wayside. For once, Australia is not the lowest ranked team here.

But this is the least-hailed and lowest-profile iteration of the Socceroos at the World Cup. In 2006, near the end of the so-called “golden generation”, at least 10 Socceroos played in major leagues. In this squad, the only player on the books of an English Premier League club is the startling teenager Garang Kuol, who has not yet played a full match in the A-League Men.

If Kuol is not already the face of the Socceroos, it is reserve goalkeeper Andrew Redmayne and his instantly legendary – and effective – grey Wiggle antics in the penalty shootout against Peru that finally secured Australia’s World Cup berth. 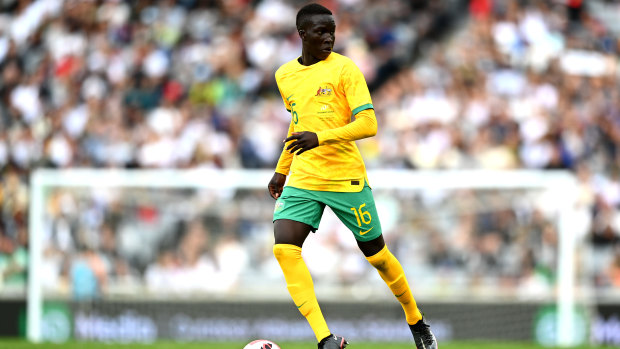 Garang Kuol in action for the Socceroos against New Zealand.Credit:Getty

The Socceroos’ collective street value is guesstimated at $60 million. In their opening match against reigning champions France, they will come up against one player, Kylian Mbappe, who is priced at around five times as much.

Yet it is a rich squad in its own way. It features three with south Sudanese heritage – including Kuol – but also seven who were born or play in Scotland and nine in all who were born outside Australia. As per modern Australia’s demographics, they’re gathered from all over. Their motif in this campaign is “Many Journeys, One Jersey”.

The Socceroos can’t win the World Cup, but Qatar can win the world. They will hope that, as in so many previous World Cups and Olympic Games, the tournament will do the wooing.

But they’re also dispersed, playing for clubs in 11 countries. This is the eternal lot of the second-tier nation. It is the current lot of coach Graham Arnold. The last thing he needs now is the first he has got: an injury cloud over striker Martin Boyle.

Other countries are also struggling on this front. This World Cup is misplaced if for no other reason than it is out of time. To avoid the worst of the gulf country’s shimmering summer heat, instead of being played between big league seasons, it is dividing one. 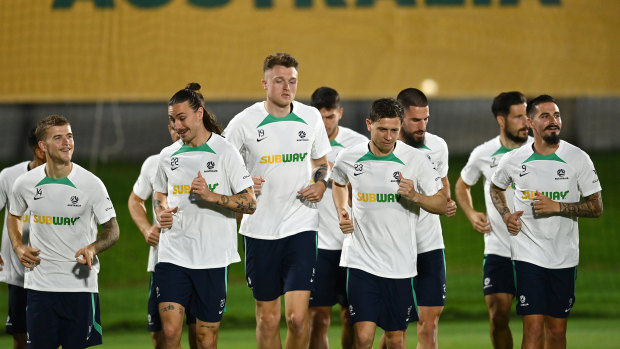 Graham Arnold’s Socceroos squad train in Qatar ahead of their World Cup opener against France.Credit:Getty

Usually, clubs cross their fingers against injuries to their expensive stars at the World Cup. This time, the managers of countries were wincing at every heavy tackle in club games before the World Cup hiatus began. Outside the refrigerated stadia, it will be formidably hot anyway, constraining preparations. Heat and injury may yet prove decisive.

The Socceroos can’t win the World Cup, but Qatar can win the world. They will hope that, as in so many previous World Cups and Olympic Games, the tournament will do the wooing. It usually does. It’s the spell that sport casts, for better or worse. 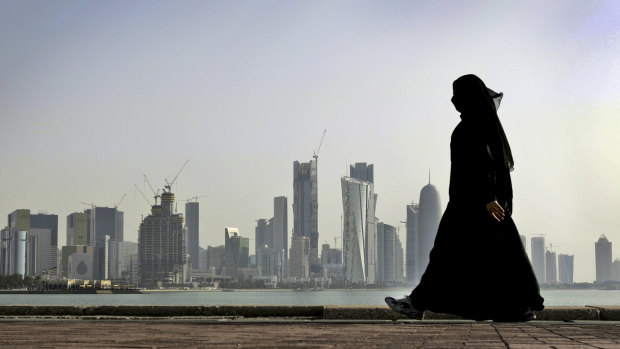 A Qatari woman in Doha.Credit:AP

Qatar is a fiefdom, Muslim and conservative and no one should expect Mardi Gras. That became even more apparent on Friday when it suddenly banned alcohol from stadia. But it is far from despotic. It asks only of the incoming world an open mind and heart.

As a million visitors begin to fill up the arrivals hall at Hamad International Airport (itself a World Cup project), and clap eyes for the first time on the spectacularly elegant lines of the new stadia, Qatar certainly makes a gleaming first impression.

But even while beholding it, it’s hard not to dwell on the human toll. Australian fans this week embarked from a country that celebrated basketballer Isaac Humphries for announcing himself as gay, and disembarked in a country where he would run the risk of jail for it.

Merson predicts where Arsenal will finish next season without transfer overhaul