How Thomas Tuchel turned Chelsea around in the big games: Self-belief, enjoyment and discipline is the mantra behind beating City and Atletico… and he’s NEVER lost against new rivals Real Madrid

Thomas Tuchel has been here before. In fact, Chelsea have been in this position, too. Twice in the last nine years. 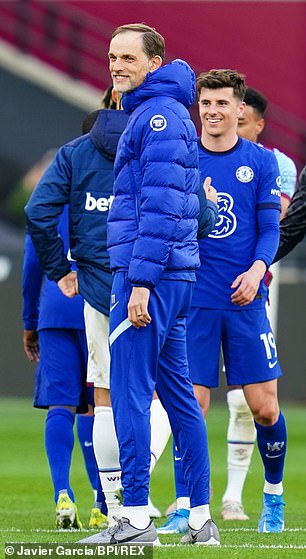 And yet, there are serious questions being asked about this side’s ability to cope with the might of Real Madrid and the gargantuan occasion of a Champions League semi-final.

‘Maybe there is a lack of experience in semi-finals,’ admitted the Stamford Bridge trainer in his pre-match press conference on Monday. ‘But we can compensate with hunger and enthusiasm.’

Tuchel is doing himself, and his squad, a disservice. There is much more to his team than the ability to show a bit of willing and enjoyment. But both help.

Both have been evident in abundance during the German’s first three months in charge – Liverpool beaten at Anfield, Atletico and Simeone stunned in Madrid and Manchester City’s Quadruple hopes quashed.

Denying a Real side led by Zinedine Zidane, a combination so well-versed in success in this competition, would represent a much larger feather in their cap.

Here, Sportsmail looks at what Tuchel has brought so far to Stamford Bridge, and what he can bring to the battle against Europe’s most potent force of the past decade.

When Tuchel arrived at Stamford Bridge, Chelsea were going backwards.

A squad that had performed admirably under a transfer embargo to deliver Champions League football, had struggled with the imbalance caused by a raft of new, expensive signings.

Frank Lampard had lost his grip and the players were quickly withdrawing into themselves. During his last eight league games in charge, the Blues lost five of them. Something needed to change.

In came Tuchel, and back came a feeling of unity within the camp. The likes of Antonio Rudiger came back in following issues with the previous boss, as did Marcos Alonso. 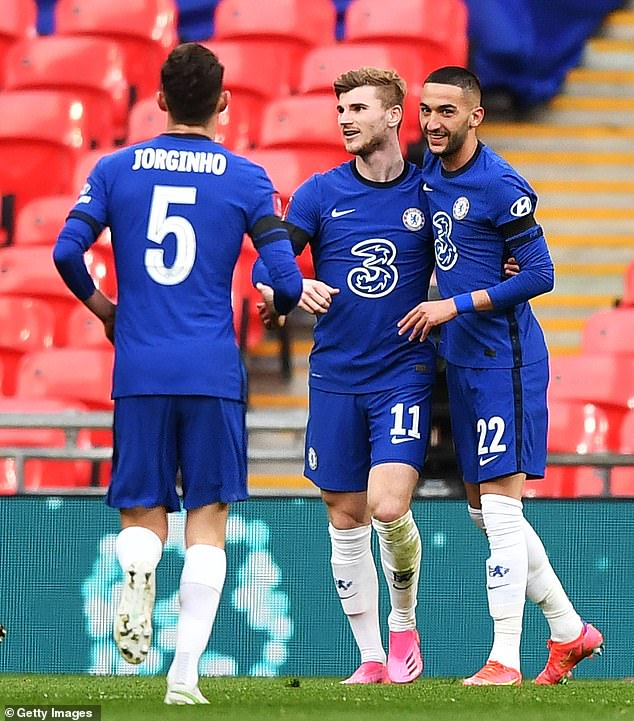 Tuchel’s side have been in scintillating form since his arrival, and look sharp at both ends

Repairing the divides produced a foundation from which every single player could begin to feel part of the process once more.

Tuchel has dispelled myths, too, continuing to use Mason Mount to great effect, silencing the suggestions he was purely Lampard’s pet project. Timo Werner, too, has built on his trust – ending his two-month scoring drought at the weekend.

It has created an environment in which all players are given their opportunity to thrive. After the disappointment of missing out on a spot in the FA Cup semi-final squad, Tammy Abraham was off the bench last weekend at West Ham.

This is a manager who knows how to squeeze every last ounce of effort out of his squad.

Shoring up at the back

The most telling aspect of Tuchel’s time in charge, has been the change in fortunes at the back.

Under Lampard, Chelsea were scoring for fun, exciting to watch going forward, but always liable to the odd defensive collapse.

Flipping the script, Tuchel has made a strong backline the key to his early success.

Switching to a back three on his arrival, and returning the likes of Rudiger and Alonso to the squad, the Blues have been able to frustrate teams time and time again, both domestically and on the continent.

The clean sheet against West Ham on Saturday was the 16th in all competitions since the former Paris Saint-Germain coach arrived at the Bridge. 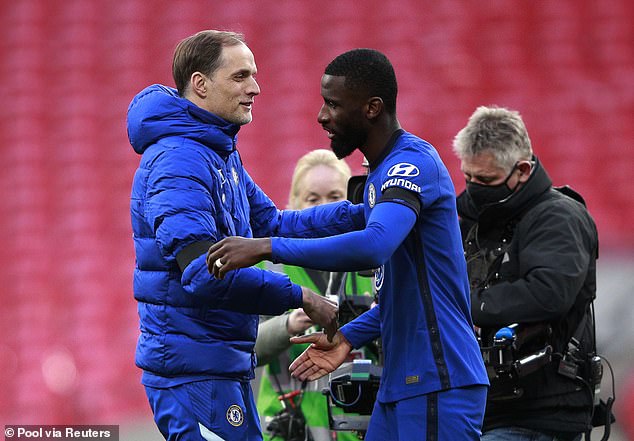 The likes of Atletico Madrid, Liverpool, Manchester United and Manchester City have all failed to find the net against the Blues – and that isn’t just down to the defence either.

Rotating N’Golo Kante, Matteo Kovacic and Jorginho to sit in front of the back three has been pivotal, with the resurgence of the Frenchman particularly impressive.

In the quarter-finals, too much time was afforded by Liverpool to Toni Kroos, who was able to pull the strings for Real Madrid in the first leg as he ripped the Reds apart.

It will be on Kante and Jorginho to ensure he isn’t afforded the same luxuries on Tuesday night, with Kovacic out injured.

When Chelsea last reached this stage of the competition, seven years ago, only one of their current squad was involved.

Cesar Azpilicueta got the ball rolling for Chelsea in the second-leg of their last-four showdown against Atletico, setting up Fernando Torres to give Stamford Bridge hope. It didn’t last as Simeone’s men came roaring back with a fine counter-attacking display to win 3-1 and progress to the final. 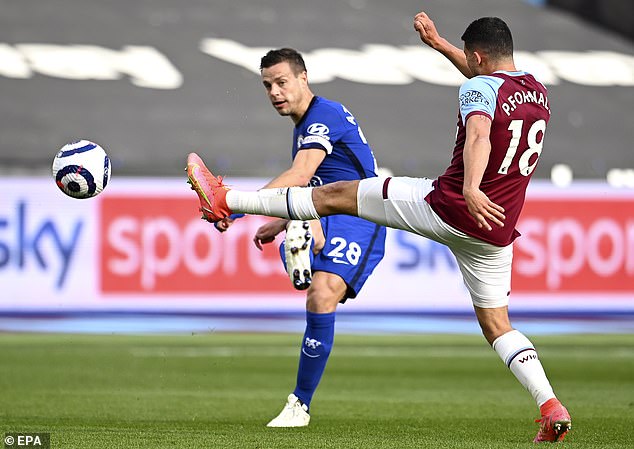 There is still experience within the squad of the latter stages of the competition –  Thiago Silva having captained Tuchel’s PSG in the final last year. Their only winner – Kovacic – is out injured.

It is Tuchel’s knockout experience, then, that they must rely on, but there is plenty of it.

Tuchel has lifted the DFB Pokal in Germany with Borussia Dortmund, and enjoyed winning the Coupe de France and Coupe de la Ligue with PSG as part of a domestic treble last season.

Most notably, he has reached a Champions League final, too. That came in the form of last season’s truncated format, where one-legged quarter finals and semis were played in Portugal.

But the knowledge of having done it before shouldn’t be discounted.

Tuchel has already shown an adept handling of knockout football with the Blues. They were far from favourites against a high-flying Atletico side in the last-16, before beating them home and away. Even on British soil, the FA Cup semi-final victory over Manchester City was something of a shock.

And so maybe that is a word that should be cast aside in Tuchel’s pursuit of glory with the Blues. Nothing should come as a surprise, not even victory in the Spanish capital.

‘I strongly believe our squad can do this,’ said Tuchel on Monday. Why shouldn’t anyone else? 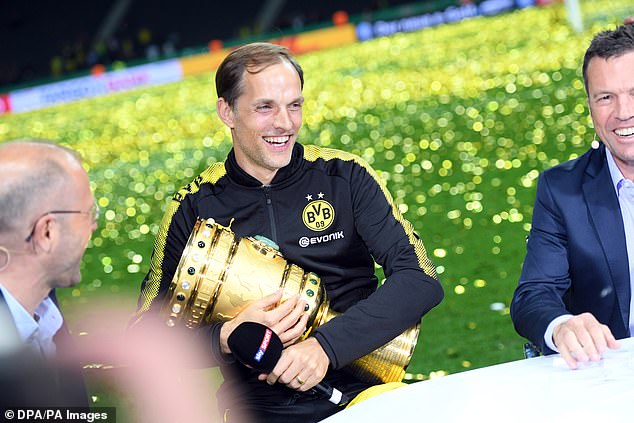 The enjoyment is back

The end of Lampard’s tenure at the Bridge was fraught. It was riddled with in-fighting, players looking to move away and a coach that was beginning to show cracks under the pressure of such an intense job.

One of Tuchel’s main goals when coming in was restore a feelgood factor that had been punctured by a run of five defeats in eight matches before the former England international departed.

To do that, Tuchel decided to get his squad engaged on the training pitch.

According to a piece on The Athletic, even for those not getting many minutes under the German, his sessions are still engaging and keeping them motivated.

‘There is a lot more attention to detail tactically now,’ a source said. ‘Tuchel is more hands-on in training sessions than Lampard. Players believe in the philosophy.’ 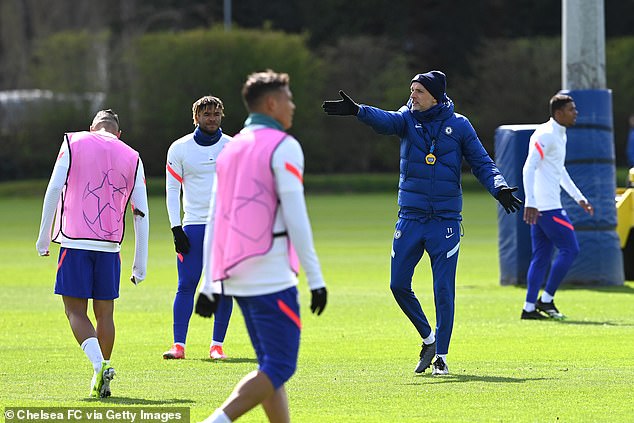 Tuchel’s training sessions have got the thumbs up from players, with the enjoyment back

This has been echoed by players, with Italian Jorginho recently commenting on this very subject. There is a feeling among some in the Chelsea squad that the former England international wasn’t quite cut out for management at the top level just yet.

The instructions and thought process under Tuchel are much more clear.

‘The coach wants us having control of the game, playing from behind, even when the pressure comes,’ Jorginho said.

They have started to control games once again – only against Liverpool have they not enjoyed the majority of possession in a Premier League clash since the German’s arrival.

But as the clash at Anfield showed, even if Real do boss the ball, that does not necessarily mean the result will follow.

A thorn in Zidane’s side

Zinedine Zidane has his detractors, but his record in the Champions League cannot be questioned.

Having won it as a player, he has led Real Madrid to victory on no fewer than three occasions, winning each in three consecutive years from 2016 to 2018.

His affinity with the trophy has played a large part in seeing him restored to the head coach role at the Bernabeu and given his experiences at this stage, few would bet against him making a fourth final.

To do so, though, Zidane will need to notch up a first. His first victory against Tuchel to be precise. 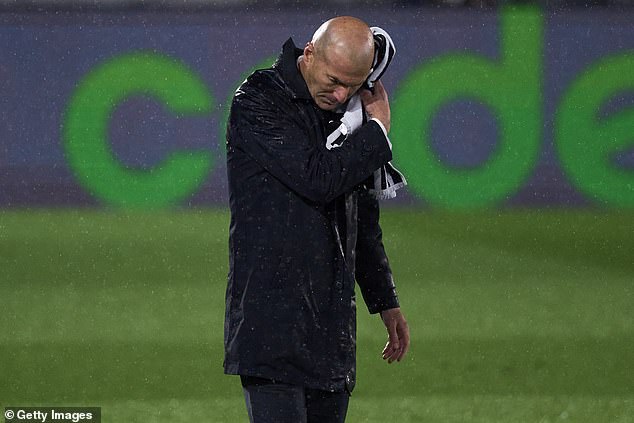 The clashes have resulted in three draws and one solitary victory – for Tuchel’s PSG in 2019.

Tuchel is the only coach that, having played three games or more against them, Zidane has failed to taste victory over.

Zidane was handed his first taste of defeat in the knockout stages of the Champions League by another English club last season, when Manchester City beat them over two legs in the last-16.

It is not something the Frenchman will be wanting to make a habit of.

Real Madrid vs Chelsea prediction: How will Champions League fixture play out tonight?