Guardiola wants Silva to stay at City amid transfer speculation

The closure of the summer transfer window is less than a week away. Manchester United and Chelsea are the busiest Premier League clubs but Liverpool, Arsenal and Tottenham may yet make one final signing each before the 11pm deadline next Thursday.

Chelsea are set to clinch the signing of Wesley Fofana from Leicester but also want Barcelona’s Pierre-Emerick Aubameyang and Everton winger Anthony Gordon. The Blues may end the summer having spent more than £300million.

Manchester United want to add a new winger having had a £76million bid for Antony from Ajax rejected. Cody Gakpo of PSV is another player in their crosshairs, as is Barcelona’s Memphis Depay who previously played at Old Trafford earlier in his career.

Arsenal are tracking Wolves wide-man Pedro Neto with Tottenham looking at a late swoop for his team-mate Adama Traore, while Liverpool are looking to land a midfielder after a change of heart from manager Jurgen Klopp. 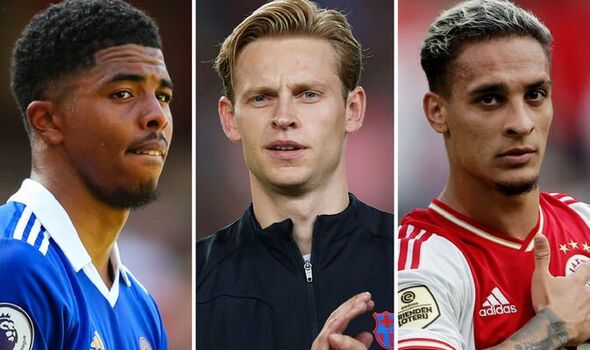 Manchester United have reportedly told Frenkie de Jong they will wait until the final day of the transfer window in case he changes his mind over a move to Old Trafford.

Spanish outlet Sport claims United made fresh contact with De Jong’s representatives on Friday. They have made the player aware that they will maintain an interest in him as late as possible and would carry out a deadline day move if the 25-year-old has a change of heart.