Al Rayyan: Socceroos, be warned: You are in for an absolute sensory overload on Saturday night (AEDT), and not the good kind. There is an enormous expat community from Tunisia here in Qatar, and they are out in force for the World Cup.

They and their national team had an underwhelming Denmark – considered by many one of the dark horses to win the tournament – completely rattled, holding them to a shock 0-0 draw in their Group D opener at the Education City Stadium. 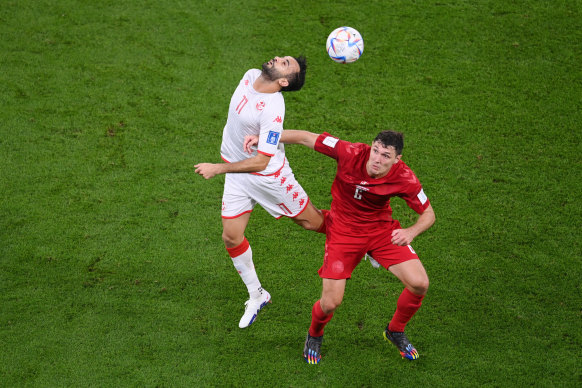 It was a good result in more ways than one for the Socceroos, who, after facing France, will take on both of these sides. One looks tough yet beatable if Graham Arnold’s men bring their best, and the other looked very frightening on paper, but much less so now.

Tunisia are up next – and it’s fair to say the 10,000 or so Aussie fans in Doha will be comprehensively outnumbered, and sonically overwhelmed. The blokes on the pitch, as well, will have their work cut out.

When the draw for this World Cup was conducted and the Socceroos confirmed their spot in Group D, Tunisia were ranked No.30 in the world by FIFA and their clash looked easily the most winnable match on paper. That it still may be, but it certainly won’t be easy.

The Eagles of Carthage, as they’re known, won’t be winning any plaudits for aesthetically pleasing football, but their grit, tenacity and defensive organisation – backed up by 95 per cent of the raucous crowd of 42,925 – was a sight to behold, and it blunted Denmark’s collection of highly touted UEFA Champions League stars, led by Manchester United’s Christian Eriksen.

Issam Jebali, who plays his club football with Socceroos left-back Joel King at Danish club Odense BK, should have put Tunisia ahead just before half-time, only for a freakish one-handed reaction save from Kasper Schmeichel to deny his attempted lofted finish. He did have the ball in the net earlier in the half, but was ruled marginally offside.

Denmark tried to start on the front foot, but Tunisia wouldn’t let them. In the opening moments of the match, they looked to their star man Eriksen, who took a rare poor touch and had the ball taken off him by a desperate, lunging slide tackle from Aissa Laidouni, who bounced straight up and double fist-pumped the air to rev up the crowd. It wasn’t as if they needed revving, but it set the tone for what was to come.

The Danes, who would muster just two shots to Tunisia’s eight in the opening half, were rattled. Boos, hisses and whistles accompanied every touch, while even the most basic defensive actions from Tunisia were celebrated as if they were goals.

Denmark’s superior technical ability was clear, but not where it counted. Manager Kasper Hjulmand dragged skipper Simon Kjaer off as part of a triple-substitution in search of a spark midway through the second half. It nearly worked as they broke through Eriksen in the 69th minute – only for his shot from the top of the boss to be tipped wide by Tunisian gloveman Aymen Dahmen.

Andreas Cornelius, the FC Copenhagen striker who was one of the three summoned off the bench, also failed to make clean contact on an easy back-post header that instead hit the post as another golden chance went begging by Denmark.

Tunisia defended resolutely and threatened on the counter as the Danes struggled to break them down and, in the end, their fans were delighted with a point, and their opponents disappointed.