Turkey vs Wales LIVE: Back to Baku as Gareth Bale and Co try to build on their Euro 2020 draw with Switzerland in front of a partisan crowd at the Olympic Stadium

Wales face Turkey in their second Euro 2020 fixtures as Robert Page’s side look to build on their 1-1 draw with Switzerland at the weekend.

But Gareth Bale and Co will have to contend with a Turkish side determined to salvage their tournament after a 3-0 thrashing by Italy on opening night last Friday.

They will also have to deal with a partisan crowd in Turkey’s favour at the Baku Olympic Stadium.

Midway through the second-half in Saint Petersburg and Russia remain on course for their first win of Euro 2020. They lead 1-0 thanks to that Miranchuk strike just before half-time.

You can follow live commentary by clicking the link below. 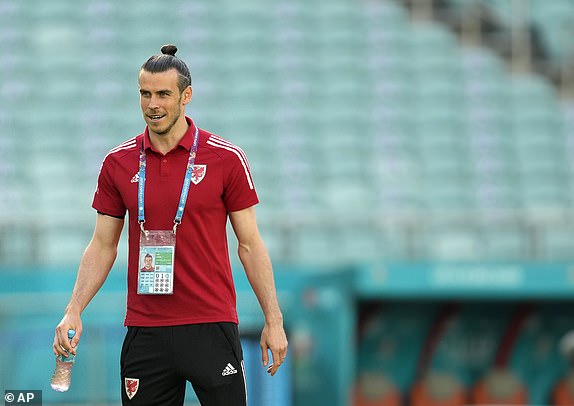 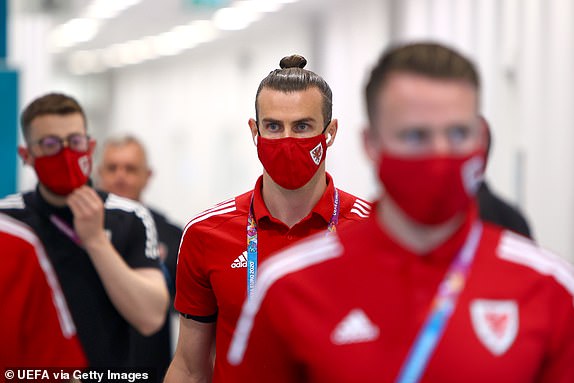 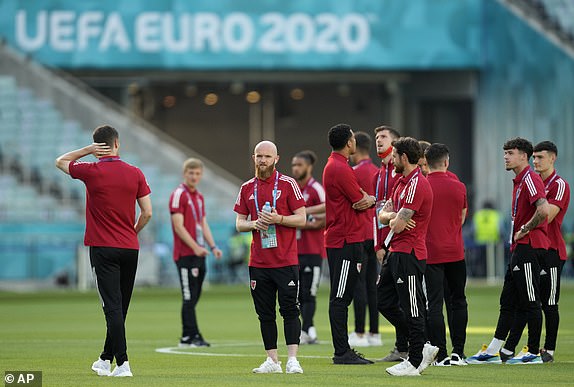 IAN HERBERT IN BAKU: They’re leaving no stone unturned in the endeavour to make this city a small corner of Turkey on Wednesday.

The red flags with the white star and crescent adorn windows in every street and have even been draped across the entrance to the Wales training base. The half-and-half scarves are Turkey/Azerbaijan.

The front page of Tuesday’s Respublika newspaper was dominated by the Turkish president Recep Tayyip Erdogan signing a new trade deal here before paying a symbolic visit to Shusha.

Click the link below to read the full article.

The most recent meeting between these sides was in 1997, when Turkey won a World Cup qualifier in Istanbul 6-4 – the only time Wales have scored four times in a game but still lost.

Wales boss Page started in that game, having made his international debut against Turkey in 1996.

Turkey attempted just three shots against Italy, their lowest total in a European Championship match. None of those efforts were on target.

Defeat against Italy means Turkey have lost their opening match at all seven of their major tournament appearances. But they have advanced to the knockout stage the last three times they have avoided defeat in their second game (at Euro 2000 and 2008, plus the 2002 World Cup).

Wales have only failed to score in one of their seven European Championship matches – their 2-0 semi-final defeat to Portugal in 2016.

Wales have never lost a game in which Kieffer Moore has scored, while four of his six international goals have been headers.

Gareth Bale has failed to score in his past 12 appearances for Wales, his longest drought since a run of 20 matches between 2007 and 2010.

Bale has not scored a competitive international goal outside of Wales since netting in a 3-0 win versus Russia at Euro 2016. 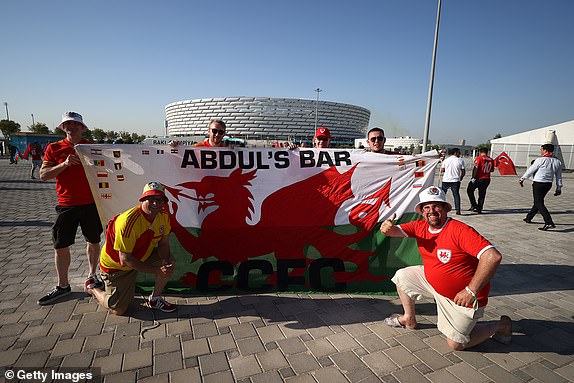 The first round of group matches seemed to pass by in a flash but the tournament does seem to be gathering a little bit of momentum now after a slow and sluggish start in most games.

But there were some players who managed to steal the show on matchday one, from Cristiano Ronaldo re-writing the record books yet again to Kalvin Phillips bossing the midfield for England.

Then there was the heroic Danish captain Simon Kjaer, who rushed over to perform first aid when Christian Eriksen collapsed on the field.

We select a best XI from the first set of fixtures. Click the link below to read.

A little bit about the Baku Olympic Stadium, which is hosting the match today.

This modern arena replaced the Tofiq Bahramov (the linesman who gave THAT England goal in 1966) Republican Stadium as the home of the Azerbaijan national side in 2015.

It does resemble the Allianz Arena in Munich, also a host venue in this 11-venue tournament, from the outside.

It’s another scorching day in the Azerbaijani capital with temperatures of around 30C expected at kick-off and bright sunshine. 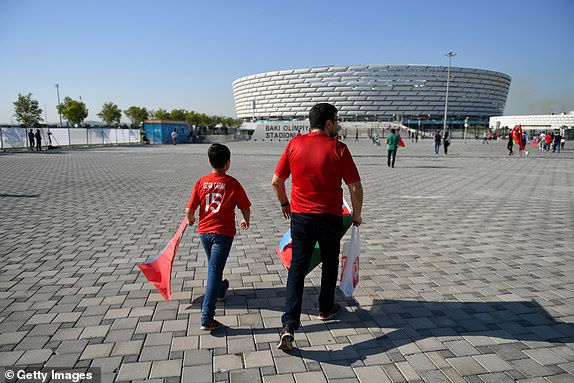 There was hardly anyone inside the Baku Olympic Stadium when Wales played Switzerland in their opener on Saturday. It will be a very different tale tonight.

Azerbaijan and Turkey are close geopolitical friends and they even have a shared slogan of ‘two states, one nation.’

So the vast majority of the 30,000 or so who’ll be inside the arena tonight will be firmly behind Turkey and Wales have been preparing for it.

‘When you come into an away stadium you know you’re going to get abuse,’ said Wales captain Gareth Bale to the BBC.

‘But it’s something all us footballers have dealt with in the past – it’s normal. You enjoy it and feed off the atmosphere.

‘Of course they’re not saying great things or booing us but you want to silence them.

‘It gives you extra motivation, if we needed any more. It’s the atmosphere we enjoy the most and that’s what makes football so good.’ 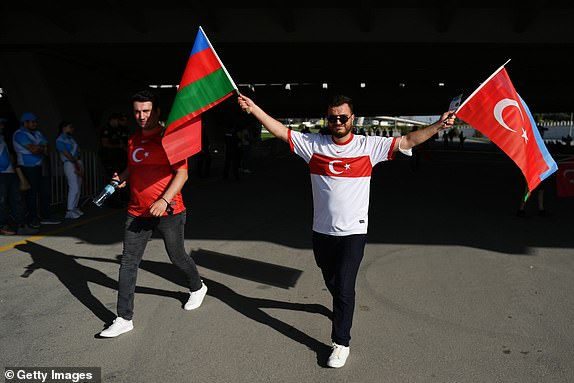 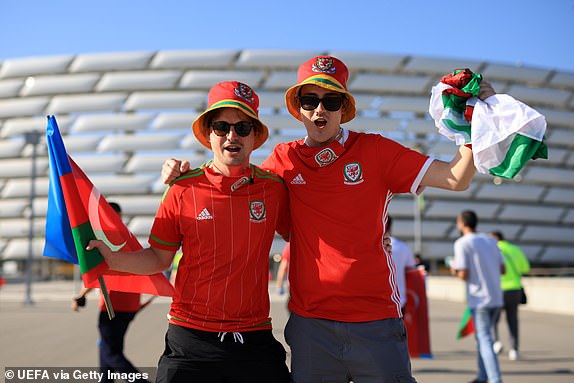 News from Saint Petersburg in the early kick-off and it’s a goal for Russia just on the stroke of half-time. Atalanta’s Aleksey Miranchuk has grabbed it and Finland will feel hard done by after an earlier goal they scored through Joel Pohjanpalo was ruled out by VAR.

Players and coaches from every competing nation at Euro 2020 have sent their best wishes to Christian Eriksen in a touching video message.

The Danish star is recovering in hospital after suffering a cardiac arrest and collapsing on the pitch during their opening match against Finland in Copenhagen on Saturday night.

Eriksen needed 13 minutes of CPR from the Denmark team doctors before regaining consciousness.

The 29-year-old remains in a stable condition in hospital, posting an Instagram selfie giving the thumbs up from his bed on Tuesday. He declared himself ‘fine – under the circumstances.’

The world of football was united in wanting the Inter Milan attacking midfielder to make a full and speedy recovery and the Danish FA has posted a video compilation of good luck messages.

The UEFA president Aleksander Ceferin opens the messages and the video finishes with Anthony Taylor, the referee in charge of the Denmark vs Finland match, wishing Eriksen well.

You can watch the full video below

Here’s how the table looks ahead of the second set of fixtures in Group A.

Italy lead the way thanks to that 3-0 win over Turkey, followed by Wales and Switzerland who shared the spoils on Saturday.

Turkey are presently bottom of the table but the situation can still change drastically.

This group of supporters were at the stadium some three hours before kick-off which you might say is dedication.

As mentioned earlier there’s plenty of camaraderie between Turkey and Azerbaijan so we can expect all the locals to be cheering Turkey on inside the stadium. 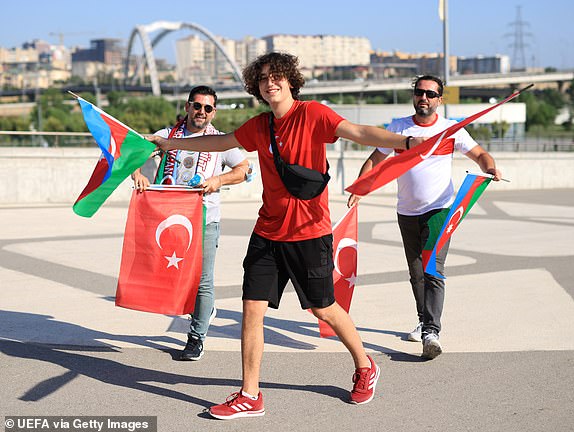 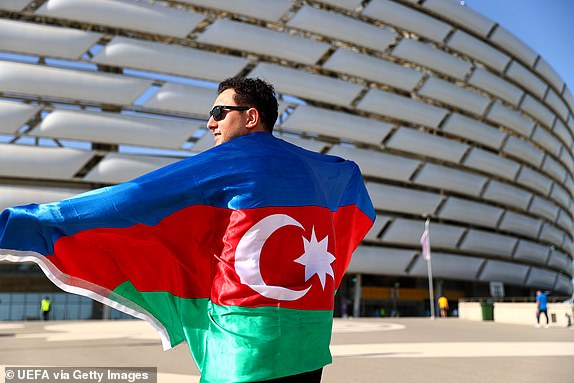 If you felt a little bit short-changed with only the two matches yesterday, then fear not as we’re back to the three games today.

They come from Groups A and B as the second round of group fixtures get going.

We’re already underway in the Group B encounter between Finland and Russia in Saint Petersburg and there’s no score so far. You can follow that one by clicking here.

Then at 5pm it’s our feature attraction – Turkey vs Wales.

And to cap things off at 8pm, also from Group A, is the meeting of Italy and Switzerland. If Italy win that, they’ll be pretty much through to the last-16.

It was far from their greatest performance but Wales came away from Saturday’s Euro 2020 opener against Switzerland with a potentially crucial point.

That Kieffer Moore header and those vital saves by Danny Ward made the difference in Baku and the key now is to build on it against Turkey this afternoon.

It won’t be easy. Turkey have their own point to prove after taking something of a hiding at the hands of Italy in last Friday’s tournament opener.

Viewed by many as potential dark horses at the Euros, they simply have to win here to prevent their dream crumbling into dust.

But they’ll have the advantage of a passionate and partisan crowd behind them at the Baku Olympic Stadium.

Turkey and Azerbaijan are strong allies and there will be plenty of Turkish support in the stadium.

With Italy still to come, Wales would really do with all three points here but a draw would keep them alive.

Welcome along to our coverage of this 5pm kick-off UK time. There’s plenty of build up to come with me Adam Shergold before Danny Gallagher takes over for full match commentary. 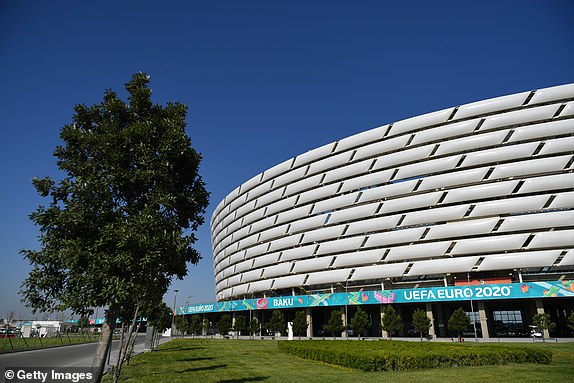