The final game of the 2020-21 season is upon us as the UEFA Champions League will be decided this Saturday in Portugal. Will it be the all-conquering super-team that is Manchester City, as they finally win the one trophy they’ve never held? (It would also break a 10-year drought for Pep Guardiola, who last won it with Lionel Messi and Barcelona in 2010-11) Or will it be Chelsea, who’ve beaten City twice in recent weeks (once in the FA Cup semifinal, and again in their Premier League fixture) but are enduring a horrendous run of form? (Thomas Tuchel, a losing finalist last season with Paris Saint-Germain, will also be eager to erase the sadness of defeat vs. Bayern.)

There are storylines galore as the Premier League sides prepare to do battle, but we’ve got you covered before the season finale.

Defensive reliability has been the bedrock of both Chelsea and Manchester City’s progression to the final, with the two clubs conceding a competition-best four goals on their way to Porto. City conceded just one goal in six games during the group stage — in the opening fixture against FC Porto in October — while Chelsea shipped just two goals under Frank Lampard’s management in their group.

Ironically, the only team to blemish the records of City and Chelsea in this season’s competition has been Porto, the resident club at Estadio do Dragao, where Saturday’s final will be played. The Portuguese team are the only side to beat Chelsea in the Champions League this season, winning their quarterfinal, second leg 1-0 in neutral Seville in April, and Sergio Conceicao’s side are sole team to have denied City a victory this term when they held Pep Guardiola’s team 0-0 at home in December.

In terms of goals, City have scored 25 on their way to the final with Chelsea managing 22, but Thomas Tuchel’s team may have the psychological advantage of winning their last two domestic encounters with City.

A 1-0 victory in the FA Cup semifinal at Wembley last month preceded a 2-1 win at the Etihad, when Chelsea fought back from being 1-0 down to claim all three points. On both occasions, Chelsea’s pace on the counter attack proved decisive with Timo Werner, Hakim Ziyech and Mason Mount all exploiting spaces in the City defence to leave Guardiola with a tactical problem to solve in Porto.

Chelsea’s prospects depend on a positive turn after fitness worries surrounding goalkeeper Edouard Mendy and midfielder N’Golo Kante. Both have been crucial in Chelsea’s run to the final and Kante’s availability, in particular, will be key to protecting the back three and stifling City’s attacking players.

While City’s defence, particularly the centre-back pairing of Ruben Dias and John Stones, is a strong point, it is the array of attacking outlets that make them so dangerous. Kevin De Bruyne, Raheem Sterling, Phil Foden, Bernardo Silva, Gabriel Jesus and Ferran Torres could all play a significant role on Saturday, with club record scorer Sergio Aguero always capable of deciding the game from the bench.

But the final will come down to whether Chelsea can repel City’s waves of attacks long enough to hit them on the counter, as they have done twice in the past six weeks. — Mark Ogden

Can Tuchel shake off last year’s pain and win with his new team?

If you watched Tuchel in the technical area during Chelsea’s last two games, against Leicester and Aston Villa, you would have seen him looking tense, frustrated and stressed; he seemed angry and on the edge, which made sense given how much was at stake for him personally and for the team.

Chelsea’s season hinged upon finishing fourth in the Premier League. It was Tuchel’s objective when he joined the club in January, the Blues languishing in ninth at the time. On the other hand, the Champions League was not one of his targets. He wanted to do as well as possible, obviously, but the priority was to improve and to climb up the league table. Yet, this European campaign has been a fantastic ride and the German made history this year in becoming the first manager ever to reach to Champions League finals in a row with two different teams.

This week, there is no frustration or stress. He has been more chilled-out than ever before since joining the club. Smiles were present in training — plenty of laughter, too — and he has tried all week to transmit this renewed calmness and serenity to his players. He knows all too well, after his experience last season with Paris Saint-Germain, that you can’t approach such a big game in a state of tension. Players cannot stress before such an incredible match. They have to enjoy the occasion, make the most of it and be themselves.

That’s the message Tuchel has passed on to his players. He’s still been applying pressure, of course, but positive pressure. In essence, You are 90 minutes (or a bit more) away from winning the biggest prize in club football. You have already beaten Manchester City twice in the last few weeks, in the FA Cup (1-0) at Wembley and away at the Etihad in the league (2-1) with a superb collective performance in the second half.

Since the Premier League ended on Sunday, the communication has been so positive and confident from Tuchel towards his squad. He learned a lot from losing to Bayern Munich with PSG last season, a game for which Tuchel prepared perfectly and where his team was the best over the 90 minutes, only to lose it with their lack of composure: Bayern were clinical when Paris were wasteful.

In the two games Tuchel won against Pep Guardiola and City since his arrival at Chelsea, his team was very clinical. They will have to be again on Saturday.

Apart from him, only Thiago Silva and Mateo Kovacic have been in this position before. Silva lost his Champions League final with Tuchel, while Kovacic won it three times at Real Madrid under Zinedine Zidane! They have also led by example this week to make sure that everyone in this Chelsea squad is ready to go with the right mindset. — Julien Laurens

There are plenty of obvious similarities that tie Mason Mount and Phil Foden, a pair of playmakers who could star against one another this weekend but play alongside one another at the Euros. They are both brilliant English midfielders still years from their potential peak. They both play primarily on the left. They both are both tasked with creating some of their respective teams’ more dangerous attacking moments.

Their differences say a lot about Manchester City and Chelsea: this table shows the pair in Premier League and Champions League play in 2020-21 (per 90 minutes).

Foden’s job is pretty simple to describe. In possession play, he hugs the touchline and links up with the left-back (increasingly, Oleksandr Zinchenko), midfielders Ilkay Gundogan and Rodri, plus Joao Cancelo in whatever position he’s playing from minute to minute. When there’s a “fast-break” opportunity, he becomes the Magic Johnson to Riyad Mahrez’s James Worthy, serving the killer pass that allows Mahrez to dunk it home or, if given enough space, scoring himself with his scythe of a right leg. He attempts fewer 1-on-1s than Mount, but wins a far greater percentage of them.

Since the start of 2021, City began to find form in part by allowing Foden to do a little more in the attacking department. He’s averaged 2.1 chances created and 0.54 xG+xA per 90 since January 1, and the adjusted role has looked great on him.

Mount, on the other hand, creates less in the defensive box, but does more to help Chelsea get there. Since Tuchel’s appointment, Mount has created more than twice as many chances as anyone else on the team in the Premier League and Champions League — he’s got 45, while Reece James is second with 27 — and his expected assist total (which “measures the likelihood that a given pass will become a goal assist,” per StatsPerform) is 4.5, far higher than second-place Christian Pulisic (3.1).

In matches Mount’s played under Tuchel, Chelsea have averaged 2.4 points per game when he creates at least two chances, and 1.4 when he doesn’t. The Chelsea attack is also at its best when he’s touching the ball all over the pitch, not just along the left side. (See: the below heat map from his season.) 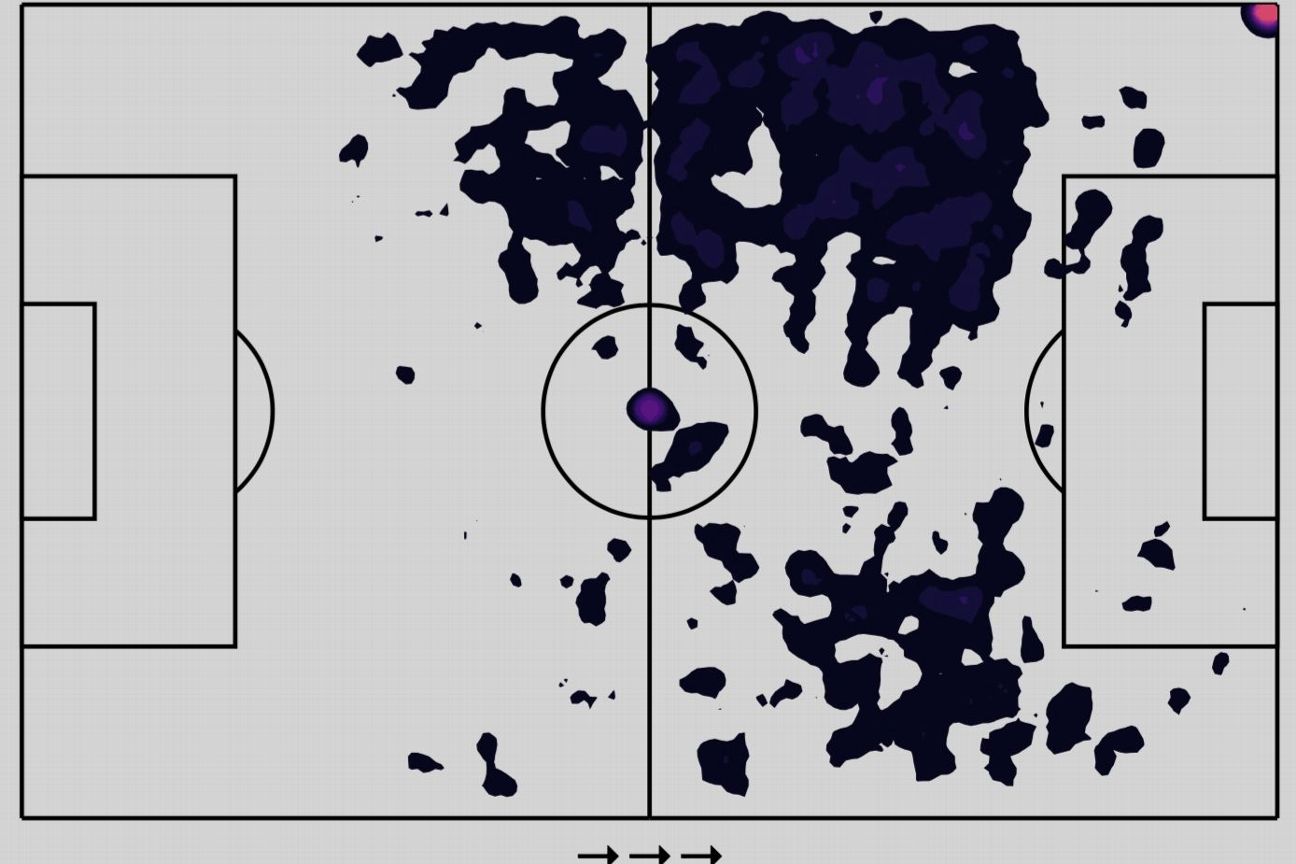 Foden is perhaps a more dangerous player than Mount and allows City to create more vertical, high-percentage scoring opportunities. But Mount is Chelsea’s engine: if the Blues score or defeat City this weekend, he likely had a key role in it. — Bill Connelly

The rise of Ruben Dias: is he the X-Factor for Man City?

Just over two years ago, Guardiola was reflecting on the departure of talismanic captain and defender, Vincent Kompany. “It will be so difficult to replace Vinnie,” he said. They were in essence losing the heartbeat of their defence, but in Ruben Dias, City have a new-look leader in his stead.

Guardiola has long searched for the right combinations at the back, spending in excess of £400m on defenders with Dias, 24, the most expensive — coming in at £62m from Benfica last September. The hefty price tag raised eyebrows, especially in the midst of financial constraints due to the coronavirus pandemic, but Dias’ debut season in the Premier League has impressed to the extent he was named FWA Player of the Year and has already been mentioned by Guardiola as a future City captain.

Whether Guardiola pairs him with John Stones or Aymeric Laporte at the weekend, expect to see and hear plenty from Dias.

In City’s 2-0 win over PSG in the semifinal second leg, Dias made three of City’s nine blocks — the most in any match under Guardiola — with two shots clattering straight into his nose. City’s charge to the Premier League title was built on a watertight defence that conceded the fewest goals in the top flight (32), while Dias’ transitional play also paid dividends: his pass completion rate of 93.2% is made even more remarkable by the fact he attempted more passes (2713) than any other defender in the Premier League.

But it’s the intangible qualities that have appealed to Guardiola. When he described Dias as “undroppable” in February, he pointed to the impact the Portuguese defender has had on his teammates. “He’s not just a player who plays good, he’s a player who makes the other guys play good too,” Guardiola said. “It’s 90 minutes talking, 90 minutes communicating, 90 minutes saying what they have to do in every single action.”

Guardiola also recently hailed Dias’ generosity with how he sees the game, constantly advising and filling in for his defensive partners, wingers or fullbacks. “He is a guy who in the bad moments is always ready to help and he’s a man of communication on and off the pitch,” Guardiola said of Dias in May. “He’s a leader. To be a leader is not to be given to you by the club, it comes from inside, it’s natural.

He is always thinking what he can do better. That is why he will have success.”

City have their new Kompany and with it, they have their dreams of European footballing immortality, built on the rock at the back. — Tom Hamilton

Man City 2, Chelsea 0: City have the best team, squad and manager. Their recent defeats against Chelsea will ensure an element of doubt in the players’ minds, but they will have learned their lessons and should win this game comfortably. — Ogden

Man City 0, Chelsea 1: I think the Blues have a game suited to play against Manchester City and will cause them problems with their defensive shape and build-up play. — Laurens

Man City 2, Chelsea 0: City’s the only thing that has made sense this year. It’s their time. (It’s either this, or Chelsea winning on an extra-time, fast-break from Werner.) — Connelly

Man City 2, Chelsea 0: Two weeks ago, I’d have gone with Chelsea springing a Tuchel-inspired surprise. But following their recent dip in form, Manchester City should complete a treble on Saturday. — Hamilton