PSG are kicking themselves after they land Bayern Munich, Liverpool are in despair at Real Madrid draw… but Man City will be licking their lips at date with RB Leipzig – verdict on every Champions League last-16 match-up

As it does every year, the draw for the last-16 of the Champions League has thrown up some mouthwatering match-ups.

Liverpool versus Real Madrid is a repeat of last year’s final while Tottenham return to face AC Milan at the San Siro for the first time since 2010-11.

There will have been groans in Paris and in Munich as PSG drew Bayern Munich.

But expect cheers from the offices of Napoli, Benfica and Manchester City after they landed favourable draws in the first knockout round. 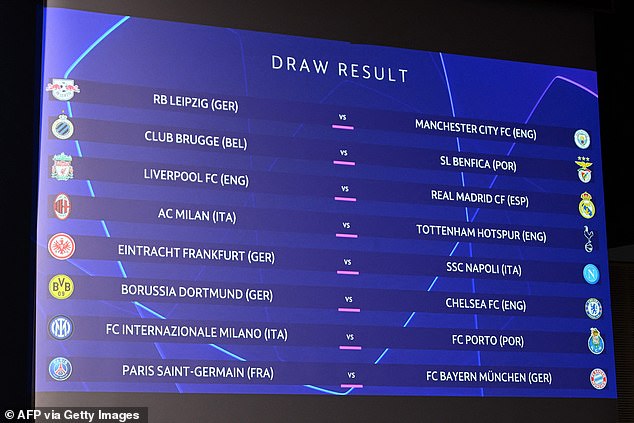 Outside of being paired with Club Brugge – who they beat 9-2 on aggregate in the group stage last season – this feels like the best possible draw for Manchester City.

They’ve bagged the sixth-best team in Germany right now and have avoided big hitters such as Paris Saint-Germain as well as AC and Inter Milan.

Leipzig are no pushovers, granted. They did push Real Madrid to the final round of the group stage to finish top, only to end up runners-up.

Their 3-2 win at home against Real Madrid will serve as a warning to Pep Guardiola’s side, no doubt.

Unbeaten in their last six matches, Leipzig look to be pulling it together but City are absolutely loaded and a fit Erling Haaland will expect to run riot back in Germany.

These sides met for the first time in the group stage last season where City pummelled them 6-3 at the Etihad Stadium, before losing the return game 2-1 when down to 10-men.

Verdict: City will be licking their lips at this match-up 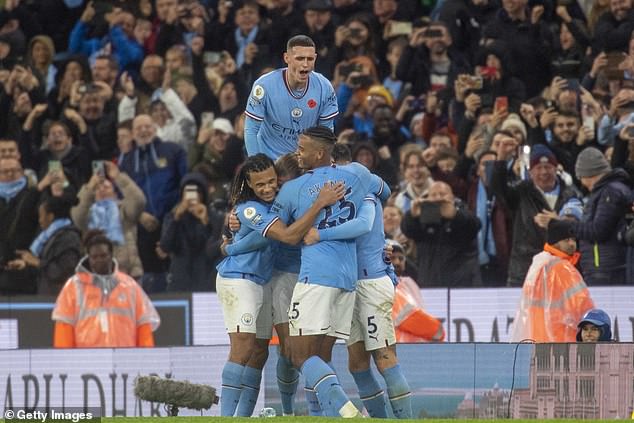 Manchester City will feel confident they can sweep aside RB Leipzig, who are sixth in Germany

As the fourth-best team in Belgium right now it’s undeniable that Brugge would have been every group winner’s preference for the last-16 draw and Benfica, who leapfrogged PSG at the last moment, are no different.

Portuguese outlet Record spoke of the need to avoid a ‘shark’ among the non-seeded teams and they have done that in getting the Belgians.

Brugge lost just once during the group stage this season, however, and conceded a Group B low four goals across six matches.

It is worth noting that they kept clean sheets in five of their six games – only getting hammered 4-0 by Porto in the penultimate round of games.

They are stubborn defensively – they shut out Atletico Madrid in both games – and Benfica, while favourites, will know this assignment is harder in reality than it looks on paper.

It is also worth noting that given the available options, Brugge will see this as one of the more winnable match-ups they could have landed having avoided Chelsea, Real Madrid, Napoli, Tottenham, Manchester City and Bayern.

Verdict: Both sides will be delighted 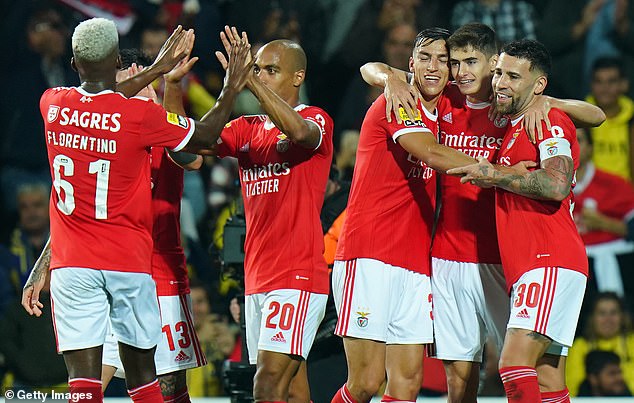 Despair for Liverpool. This feels like the worst possible pairing that Jurgen Klopp’s side could have landed.

Real Madrid, the reigning champions in this competition, won’t be thrilled given the wealth of better options in the second seeds but they had Liverpool’s number back in May when they met in the 2021-22 final.

This is the third consecutive season that these sides will meet in the Champions League and there are always fireworks whenever they do.

Ultimately, Real Madrid own this head-to-head, with Liverpool having not beaten the Spaniards since 2009. They have lost five of the six matches since that victory, including the 2018 final in Kyiv.

Carlo Ancelotti’s Real Madrid side are still unbeaten in LaLiga this season after 12 games – 10 wins and two draws – and lost just once in six games to top their Champions League group.

Liverpool have looked out of sorts so far this season but there is still plenty of time before these sides meet in February/March to fix that/ Nonetheless, the nightmare draw. 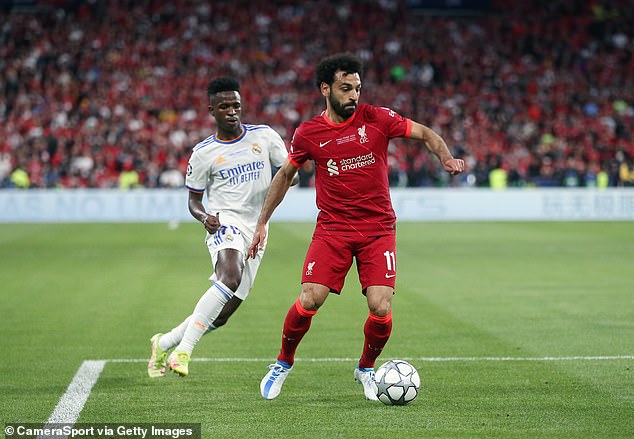 When the group stage draw was made Tottenham were favourites to take top spot and progress with some comfort to the last-16.

What instead transpired was a stop-start campaign that required an injury-time winner in the final game away to Marseille to claim first place in Group D.

Tottenham’s big-game pedigree has been questionable this season – domestically look at defeats to Arsenal, Liverpool and Manchester United.

They will be given a serious examination by AC Milan, particularly at San Siro, and if they perform anything like their away games at Sporting Lisbon or Eintracht Frankfurt they’ll be sent packing in no time.

These sides haven’t met in a competitive match since 2010-11 when Harry Redknapp took his Tottenham side to Milan.

Peter Crouch got the winner in a 1-0 win in Milan and a similar level of resoluteness is needed here to shut out the second-best team in Serie A this season.

A good omen for Spurs fans? Antonio Conte has faced AC Milan 14 times as a manager, winning 10 and losing just once.

Verdict: Tie is firmly in the balance for both sides 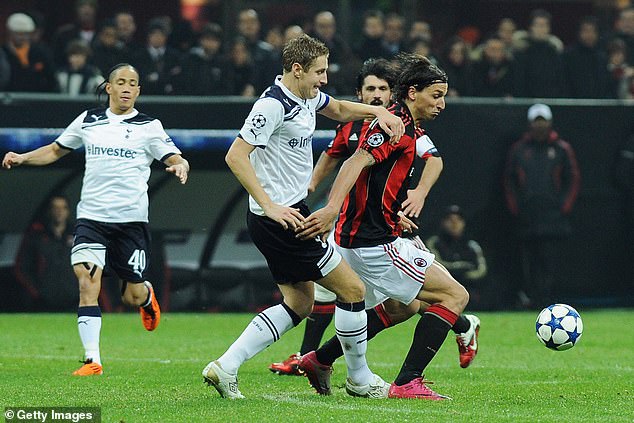 Reigning Europa League champions against the most in-form team in Europe.

Napoli have been a class apart for most of this season – their final group game loss at Liverpool aside – and are being led by the increasingly impressive Khvicha Kvaratskhelia.

‘A sigh of relief,’ noted La Gazzetta dello Sport upon conclusion of the draw.

Avoiding PSG was one the minds of everyone in Naples – and in Frankfurt to be honest – but Napoli look clear favourites to progres.

The best team in Italy this season and in pole position to end their 32-year wait for a Scudetto, their biggest enemy now is likely to be complacency, and boss Luciano Spalletti knows it.

‘Every draw is tough at this level, although we are pleased that we have avoided PSG,’ he told the club’s website on Monday.

‘Eintracht Frankfurt are still the holders of the Europa League, which is the second-biggest competition in Europe, and they’re on the up as a team. It certainly won’t be easy.’

Frankfurt will believe that Napoli’s momentum will wane by the time the match-up rolls round and will also recall that they eliminated Barcelona from the Europa League last season, highlighting their big-game pedigree.

Verdict: Sigh of relief in Italy 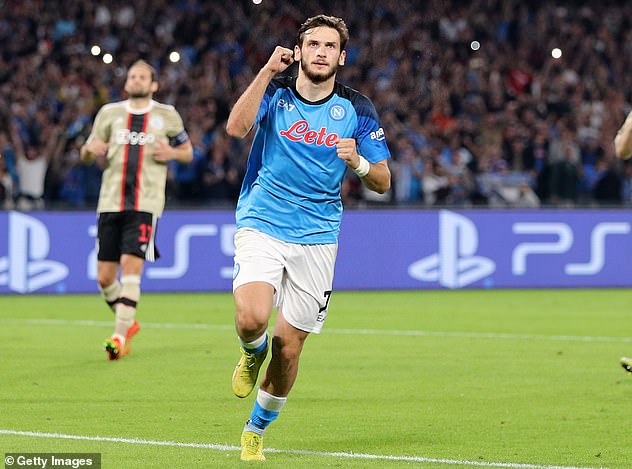 In short: a difficult draw on both sides.

Chelsea have bags of quality, Champions League pedigree and a progressive manager in Graham Potter.

Dortmund have Jude Bellingham, one of the best youngsters in European football without question.

It feels like middle ground for Chelsea. PSG was the worst case scenario and Brugge was probably Plan A if they could have chosen their fate.

Christian Pulisic and Pierre-Emerick Aubameyang will return to their old side and the first leg in Dortmund will really set the tone.

Much has been said and written about Dortmund’s atmosphere at home but we saw how Chelsea wilted away to Brighton. Similar ineptitude will take the tie away from them in Germany.

As for Dortmund, they’ll be second favourites but they won’t be fearful at the same time.

Manager Edin Terzic said on Monday after the draw: ‘We have a top team waiting for us. In Aubameyang and Pulisic we are meeting old acquaintances. 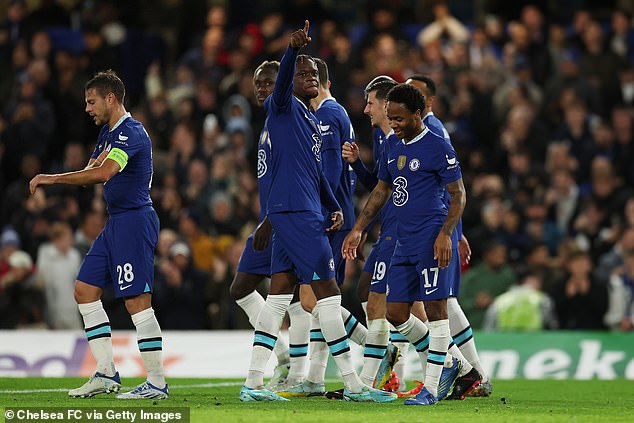 Another where both sides will be satisfied given the alternative options.

Inter vice president Javier Zanetti spoke of his optimism – and those feelings will be shared in Porto.

‘I am optimistic after having overcome a difficult group, but maximum respect for a team that has won its group,’ Zanetti said.

‘It won’t be easy at all, let’s give our fans a dream,’ boss Simone Inzaghi said.

Both sides are likely keen to shrug off any ‘favourites’ tag in a bid to create a siege mentality over the two games.

Porto have plenty of firepower and Inter always seem to have a clanger or two in them – they have lost five times from 13 league games this season already.

Verdict: Porto will go in as favourites 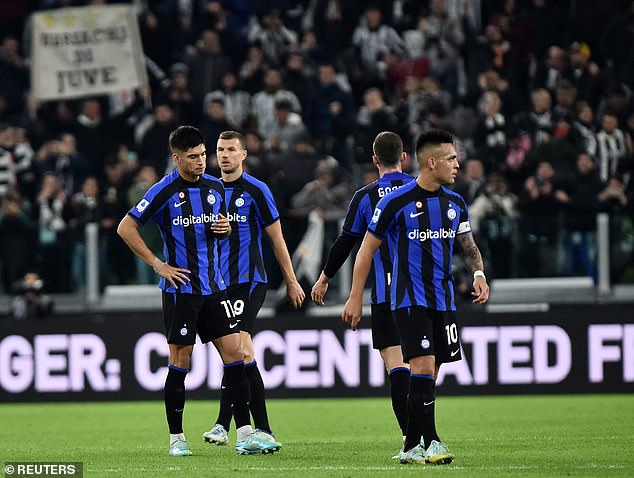 Win the group and get Club Brugge.

Finish runners-up and get Bayern Munich.

It’s a tough pill for Lionel Messi and Co to swallow.

Neither side will be completely satisfied but for the neutral they could throw up some of the greatest matches of the knockout stage this season, along with Liverpool against Real Madrid.

‘The same applies to Paris, they only gave up first place on the last matchday. They won’t be overjoyed that they’re playing us either.’

PSG got the better of Bayern the last time these sides met in Europe – with a Kylian Mbappe masterclass in Munich blowing the Germans away.

Verdict: Mbappe and Co are kicking themselves for missing top spot