Edu says he and Arteta are 'aligned on all decisions'

The Gunners have made five signings, including Manchester City pair Gabriel Jesus and Oleksandr Zinchenko for a combined £77m. 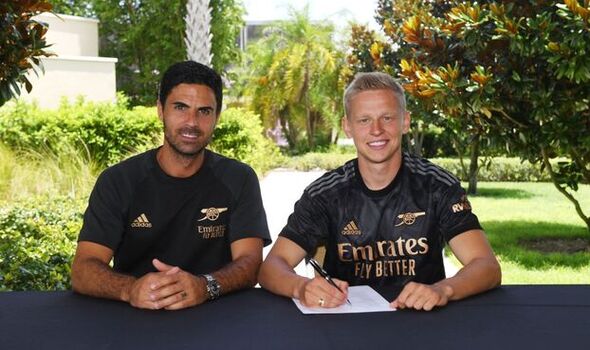 Midfield duo Fabio Vieira and Marquinhos, and goalkeeper Matt Turner have also joined but manager Arteta is still on the lookout for further reinforcements.

Speaking after his side thumped Chelsea 4-0 in Florida, he said: “You can see we are a little bit short in some positions for the way we want to play, but it is something we are trying to address.

“We have increased the quality of the team and the level of the squad is something we want to keep raising.”

Jesus, Martin Odegaard, Bukayo Saka and Albert Sambi Lokonga all netted as Arsenal ramped up preparations for the new campaign, which sees them open up at Crystal Palace on August 5.

Zinchenko made his first outing for the club against Chelsea. He played 45 minutes and Arteta was impressed with the Ukraine defender’s display. “He was desperate to play,” said Arteta.

“It was a maximum 45 minutes but you could see straight away he was comfortable. He understands everything I want and I thought he had a really good game.”

Arsenal are open to loaning Nuno Tavares following Zinchenko’s arrival, with Atalanta involved in talks. Brighton and Marseille have also shown interest in the defender but the Serie A club are leading the chase for the 22-year-old, who joined from Benfica last summer.

The Gunners are yet to decide whether they would be willing to include a permanent option in a deal. Tavares did feature against Chelsea.

Atalanta are also interested in making a swoop for former Leicester and Fulham loanee Ademola Lookman from RB Leipzig.

The Foxes were hesitant to trigger their £14m option to buy the 24-year-old winger at the end of last season because of the club’s restricted finances.