Home » Soccer » ‘We had so many chances’: Sydney FC wasteful again in disappointing Perth draw

It’s the story of their season so far, and there appears to be no quick fix in sight for Sydney FC’s struggles in front of goal after they were held to a frustrating 1-1 draw by Perth Glory on Wednesday night.

Not for the first time this A-League campaign, the Sky Blues dominated general play with almost 58 per cent of possession and generated a host of chances, taking 17 shots on goal – nine of them on target – compared to Perth’s nine. 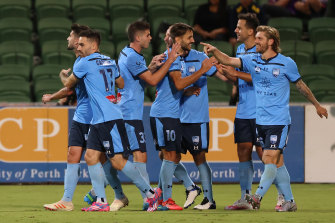 The Sky Blues celebrate Bobo’s equaliser just after the hour mark in Perth.Credit:Getty

However, they were repelled time and again by Glory veteran Liam Reddy, who kept his side in the game with a string of terrific saves before Bruno Fornaroli put them in front just before half-time.

Sydney’s pressure eventually proved too much, and Bobo was able to even the ledger in the 63rd minute with his third goal since re-joining the reigning champions mid-season.

But Steve Corica’s men couldn’t find a winner, with their fourth draw leaving them in sixth place – right in the midst of a tight mid-ladder logjam.

The Sky Blues could vault themselves up the standings with a win over red-hot Adelaide United on Sunday, which would draw them level on points and games played with second-placed Western Sydney Wanderers. 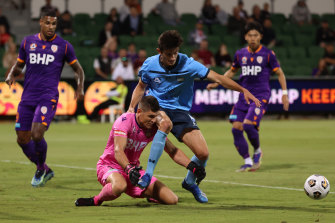 Yet the sort of clinical finishing that has guided Sydney to the last two A-League titles seems to have evaporated, and post-match, Corica could do little else but repeat an all-too familiar refrain.

“I think the game should have been wrapped up in the first half, we had so many chances,” he said.

“A little bit more composure in front of goal would have done us a world of good, and we would have been in front, but we slipped up once and it cost us, and they got the goal just before half-time.”

Kosta Barbarouses, who many Sydney fans have fingered as their most wasteful player in attack this season, didn’t feature at HBF Park after returning home to be with his wife, who has given birth to their second child.

With Olyroo Trent Buhagiar (knee) still out injured, that meant Bobo and youngster Luke Ivanovic started up front. Ivanovic had five clear-cut chances in the first half alone, but had most of them either blocked, defended or saved by Reddy.

“We are a little bit frustrated because we had a lot of chances to score in the first half and the keeper made six or seven good saves,” Bobo said.

“I think we did well but I think we can do much better so we look forward to the next game.”

Sydney won’t have Socceroos defender Rhyan Grant on deck against Adelaide after he earned his fifth yellow card of the season, triggering an automatic one-match suspension.