It is not often that the opening question of an interview comes with an apology.

There are some things you are almost embarrassed to ask, knowing the player you are speaking to would have been asked the same thing a thousand times before.

But then, sometimes, you just can’t help yourself. A player being three years older than their manager is quite a rare occurrence, and you simply have to go there.

Fortunately, Wes Hoolahan is probably the nicest man in football.

“Everybody always asks me that question!” he says with a big laugh. The former Irish international – who won the Sky Bet League Two Player of the Month award for January – is now 38, playing for a Cambridge side that are top of the table under Mark Bonner, aged 35. “They say, ‘what’s it like being older than the manager? Is it weird? Is it strange? I honestly don’t even think about it. It’s just one of those things!

“He’s got great leadership qualities and he’s got great man management. I enjoy working with him and it doesn’t matter what age he is.

“I worked with Alex Neil at Norwich. He was a brilliant manager [around the same age] as me. It doesn’t make a difference to me.”

Hoolahan’s remarkable career has now spanned 20 years. Beginning with Shelbourne in 2001. He won three League of Ireland Premier Division titles there before moving to Livingston in Scotland, and then Blackpool in England.

He helped the Tangerines to promotion via the League One play-offs in 2007, before joining Norwich a year later. He would go on to spend 10 years at Carrow Road, playing four of them in the Premier League, and helping them win promotion from both the third tier and the Championship twice. A brief stint at West Brom then followed, before a switch to Australia to play for the Newcastle Jets in 2019 that seemed to signal the end of his time on these shores.

Unfortunately for Hoolahan and the Jets, injury struck to limit his impact and number of appearances there. But he still relished the experience.

“The plan was to go to Australia and see what happened,” he says. “Unfortunately I had a bad injury and it didn’t go to plan. I wish I had more time out there to show what I could do and stuff like that, but it didn’t materialise.

“I managed to do that and it was a pleasure playing for the Jets, even if I didn’t get to play as many games as I wanted to.”

The A-League’s loss has been League Two’s gain. Hoolahan had no interest in hanging up his boots just yet, and at the end of last July he joined Cambridge. 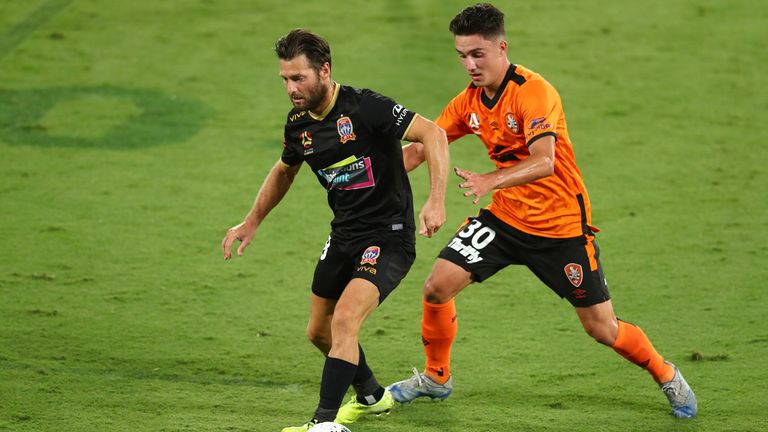 United haven’t finished in the top eight in any season since returning to the Football League in 2014, but they currently sit top of the table, and Hoolahan – nicknamed ‘the Irish Messi’ or sometimes ‘Wessi’ by Norwich fans due to his technical skill in midfield – has played a massive role with four goals and six assists in 21 appearances so far.

“I was training with Cambridge a couple of years ago because I knew (former manager) Colin Calderwood,” he says. “I was on the verge of signing, but then ended up going to Australia.

“I wanted to come back and give it a go and see how it goes. I ended up meeting with Bonner a few weeks before pre-season started. We had a good chat and the rest is history.

“I’m really enjoying it. We’ve got a great group of lads full of enthusiasm and it’s been a great experience. Obviously at the moment it’s difficult with the pitches and stuff like that, but I’m getting through it!

“My game is trying to get onto the ball as much as I can, to make passes and create and score goals. It’s been no different to my game in the Championship or Premier League.” Hoolahan may play the same as he did at the top, but he has to manage himself a little differently these days, with a lot more yoga and recovery work in the gym rather than training after a game, but there is no doubt he still appreciates every day of his career.

“I still love playing,” he says. “I’ve still got the hunger. I think it helps that I came through the leagues at a young age and had to work really hard. The feeling I had when I first kicked a ball professionally with Shelbourne at 18 is still in me playing for Cambridge now.

“I’m not the kind of person who thinks too far forward. I’m always concentrating on playing. There are plenty of routes I’d like to go down, but we’ll have to wait and see what happens. Everyone associated with Cambridge will certainly be hoping he carries on. He has won promotion from the Championship twice and League One twice in his career, once in each league automatically and via the play-offs.

It wouldn’t half be remarkable to add a fifth promotion to that come the end of the season, particularly with a club that haven’t played in the third tier for nearly 20 years.

Hoolahan ends our chat by saying the highlight of his career was Norwich’s Championship play-off final win over Middlesbrough in 2015 to take them to the Premier League.

Despite knowing the thrill a Wembley win can bring, he still hopes to get the job done earlier if they possibly can.

“I’ve done it twice through the play-offs and if you win the final it’s one of the best days of your career,” he says. “But it’s also definitely a lot more stressful at the time!”

Whatever does happen between now and the end of the season at Cambridge, whether it’s promotion, the play-offs or something else, you can bet any way that there is a lot more still to come from Hoolahan.

Klich was languishing at Leeds bu Bielsa's faith is paying off