West Ham may have enjoyed an encouraging start to the season but manager David Moyes’ half-term report reads: “Must do better.”

The Hammers, who narrowly avoided relegation last season, are safely in the top 10 and have half an eye on the European places.

Moyes must be hugely satisfied with the way he has turned the troubled club around and got the players performing in his second stint as manager.

But the hard-line Scot said: “Yeah, but I’m not telling them that!

“They are only getting told they have got to do better. I am one of these hard ones, like the headmaster who doesn’t smile. Must do better.”

The Hammers are looking to extend their unbeaten run to five matches in all competitions when they host Burnley on Saturday.

The cash should be burning a hole in Moyes’ pocket while the transfer window remains open, but he insisted: “I’m only looking at four wins from the next four games.

“If I can do that, and make sure I do as well as I can, then nothing else is that important. If something else comes along that can help us win games then we’ll look at it, but the people who are important are the players who are in this building at the moment.

“We want the players improving and doing better than they have done at the moment, that’s the message. If something else comes along we’ll soon let you know.”

Reims striker Boulaye Dia is a transfer target for West Ham as they seek a replacement for Sebastien Haller. 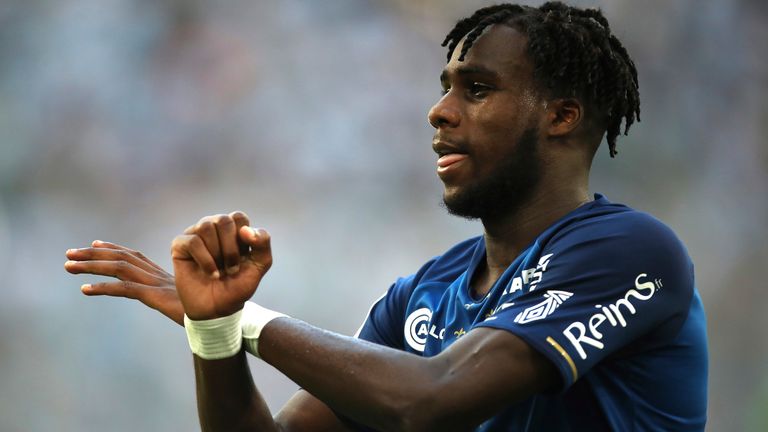 The 24-year-old is rated at around £10m by the French club and has scored 12 goals in 17 Ligue 1 appearances so far this season.

Dia is one of several strikers who has been linked with West Ham, who are keen to bring in a centre-forward during the current transfer window.

The Hammers last week sold Haller to Ajax for £20.2m – less than half the £45m they paid Eintracht Frankfurt in the summer of 2019.

Haller only scored 10 goals in 48 appearances for West Ham and the club took the decision to recoup some of their outlay with a quickly-completed transfer to Ajax.

The swift nature of that deal has left manager David Moyes searching for a replacement as a matter of some urgency, and in an area of the team he was not expecting to make an alteration this month.

The winter transfer window is open until Monday, February 1 at 11pm.

Follow all the news and analysis on Sky Sports News and across Sky Sports‘ digital platforms, including our dedicated Transfer Centre blog.