Among the 3,000 Eintracht Frankfurt fans in the London Stadium on Thursday night, amid the boisterous bouncing, choreographed flag-waving and songs of serenade for their players, one supporter gripped a flare tightly. If it was a symbolic warning sign, it was not one heeded quickly enough by West Ham.

Because from the referee’s first whistle, the moment the 46 years separating this fixture and the teams’ last meeting vanished into some temporal ether, it only took 50 seconds for Frankfurt to move ahead in this semi-final. As Ansgar Knauff secured the opening goal at the earliest opportunity, it seemed at once that West Ham might wake with a start and a shiver from their European dream.

The Premier League side and Frankfurt’s last and only previous clashes also made up a European semi-final, with the English club seeing off their German opposition over two legs in the 1976 Cup Winners’ Cup. It was a dramatic affair that gave way to an equally dramatic final, one in which West Ham came up short against Anderlecht.

On this evening, Hammers fans were immediately given reason to pine for drama – anything other than the dispiriting Frankfurt victory that was on the cards for a brief spell after Knauff’s early opener. A break on the left flank had seen Daichi Kamada slip a pass through the West Ham defence, where Rafael Borre collected the ball and curved a deep cross onto the head of the onrushing Knauff. The right wing-back buried his header.

The almost incredulous sigh of the West Ham faithful was swiftly substituted for a defiant roar. The home players began to embody that defiance in their performance, unwilling to let this long-awaited occasion pass them by. 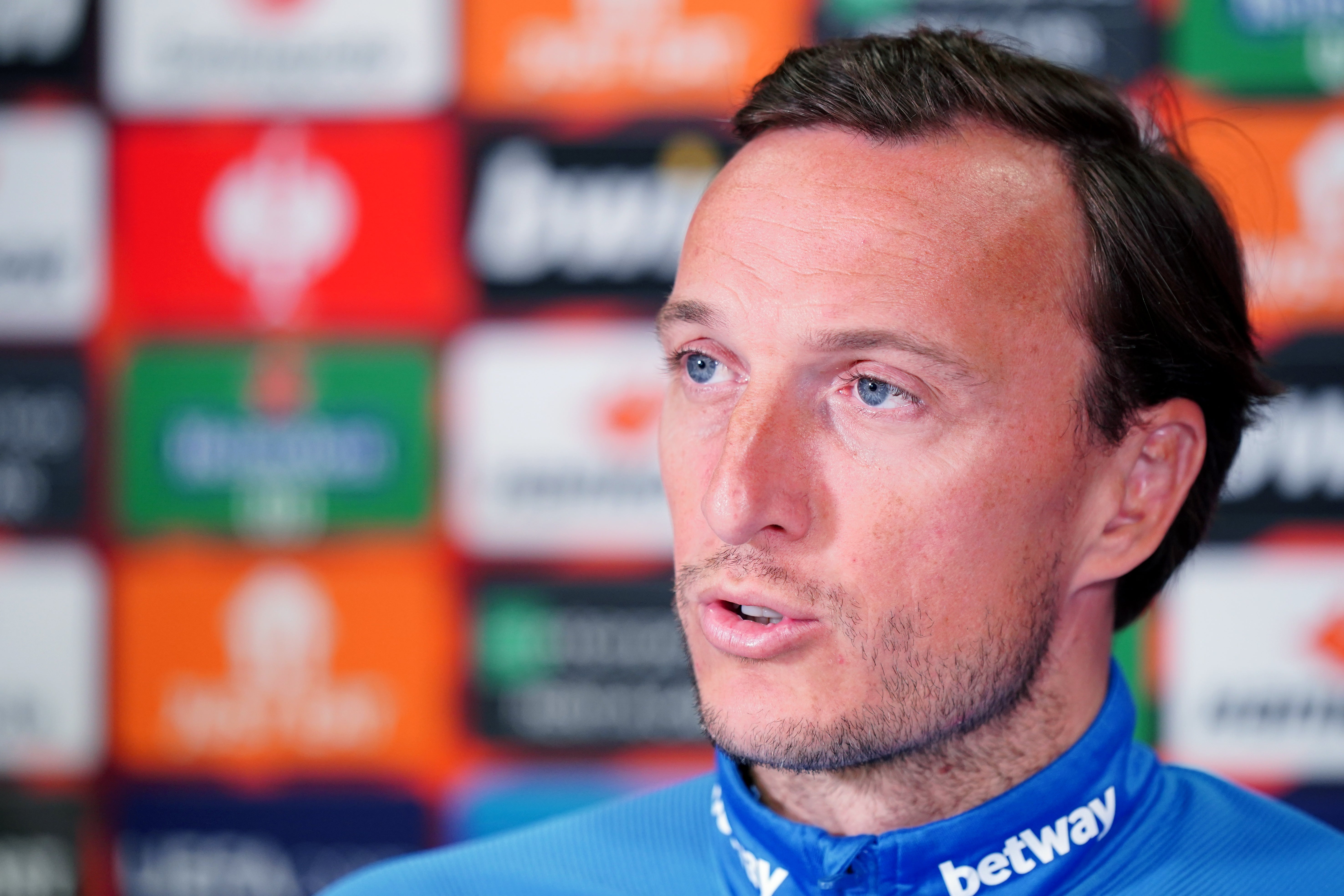 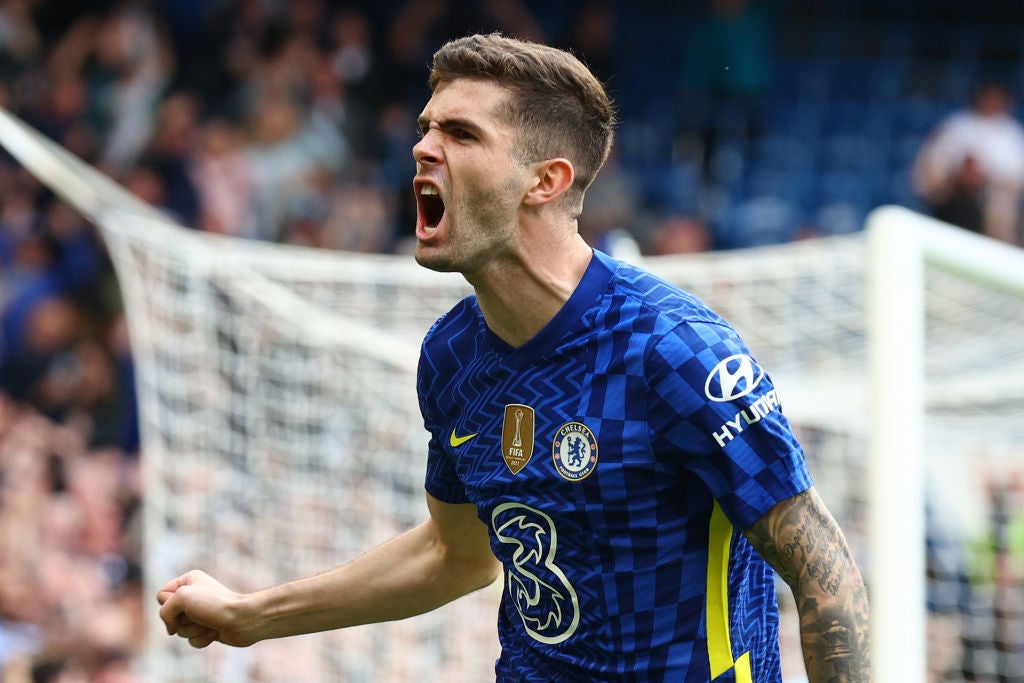 Jarrod Bowen looked to have found an equaliser within 15 minutes of Knauff’s goal, when he was put through one-on-one by Tomas Soucek. The winger’s finish, however, struck the outside of the post as some West Ham fans celebrated prematurely. Frankfurt goalkeeper Kevin Trapp even seemed to have found a crucial touch to deny Bowen.

West Ham would not have to wait much longer for parity, though. Having already seemingly been awarded more free kicks than in their home legs against Sevilla and Lyon combined, the hosts lined up in the visitors’ box to await a Manuel Lanzini free kick. With the delivery, sent in from a central position outside the area, Lanzini picked out Kurt Zouma, who was making a somewhat surprising return from injury to start here.

The centre-back nodded the ball across the goal to Michail Antonio, who leapt forward and managed to nudge it over the line with an outstretched leg. 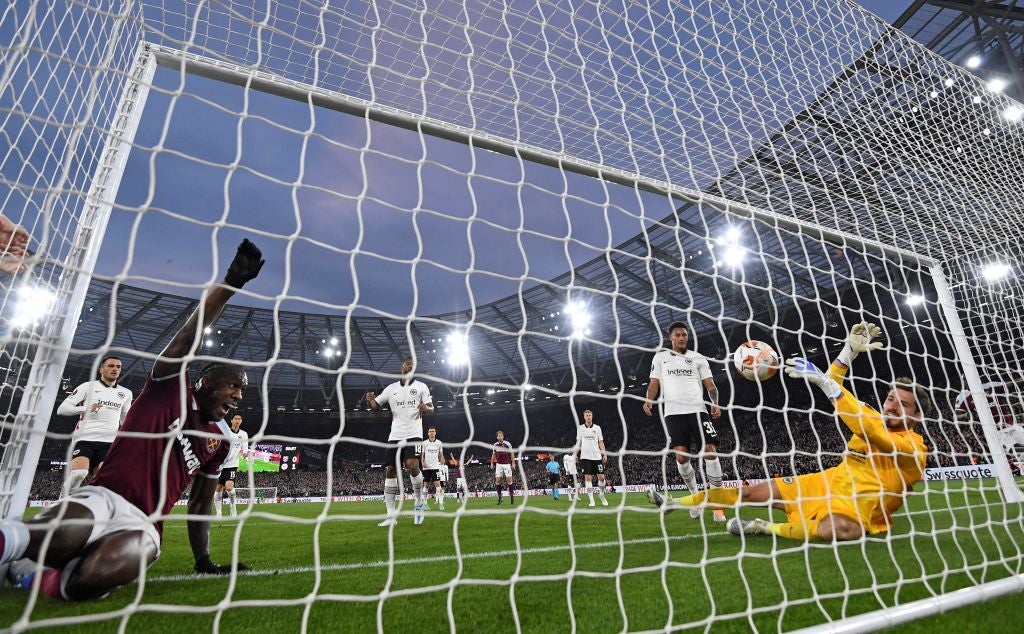 Michail Antonio stretched to turn in the equaliser

The sonic eruption that followed was of the kind that has very quickly become familiar in this ground over the last month, as David Moyes’ side have notched the goals to seal a last-16 win against Sevilla and set up a quarter-final dismissal of Lyon.

Similar reactions even punctuated the winning of corners and free kicks as West Ham went in search of a lead in this first leg, though it was Oliver Glasner’s team who came closest to moving in front – again – before half time.

As West Ham players sprinted back in an effort to quell a Frankfurt counter-attack, Borre seemed to have found himself in enough space and with enough time to get a shot off in Alphonse Areola’s penalty area. Somehow, Aaron Cresswell made the most vital of recoveries, the left-back scything the ball from the Frankfurt striker. Borre regained it in time to muster a shot, but the Colombian fired his effort high and wide.

While West Ham had enjoyed more of the possession, Frankfurt – fresh off a stunning quarter-final victory over favourites Barcelona – had looked the more threatening team, mainly on the break.

It was from a more diligently-crafted move, however, that the away side restored their lead within 10 minutes of the second half starting.

A sequence of deft passes resulted in a give-and-go between Jesper Lindstram and Djibril Sow, the latter receiving the ball around 10 yards out and trying to slot a low shot past Areola. The West Ham keeper denied the midfielder brilliantly, but Kamada was on the scene to tap in the rebound. 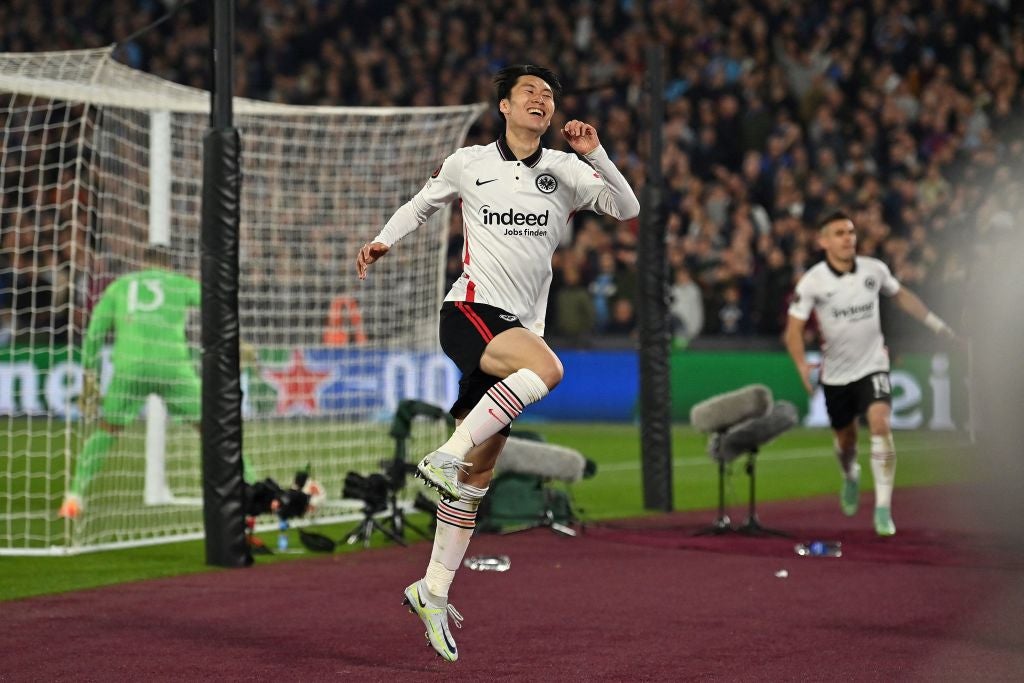 Daichi Kamada, who would also hit the post, ensured Frankfurt will take a first-leg lead back to Germany

In the away end, the flare had been reignited; others were lit in kind. On the pitch, a figurative flare was only starting to burn more brightly in Eintracht.

West Ham were also galvanised, though, and it did not take long for Said Benrahma – on in place of Lanzini – to exhibit that attitude by whipping a long-range effort past Trapp. Unfortunately for the Algerian, his shot skimmed the outside of the post.

As much as the home fans tried to will on their players, frustration was growing in the London Stadium. Frankfurt took their turn to hit the post, with Craig Dawson’s intervention diverting a Kamada shot onto the woodwork.

In the final seconds, Bowen looked to have conjured some magic with an overhead kick. The ball struck the crossbar, then Trapp, but it would not cross the line.

For the hosts, it was a final chance come and gone. The question now is how much of a chance West Ham have of reaching next month’s final. It is not as slim as some fans will feel in the uncomfortable heat of this moment. 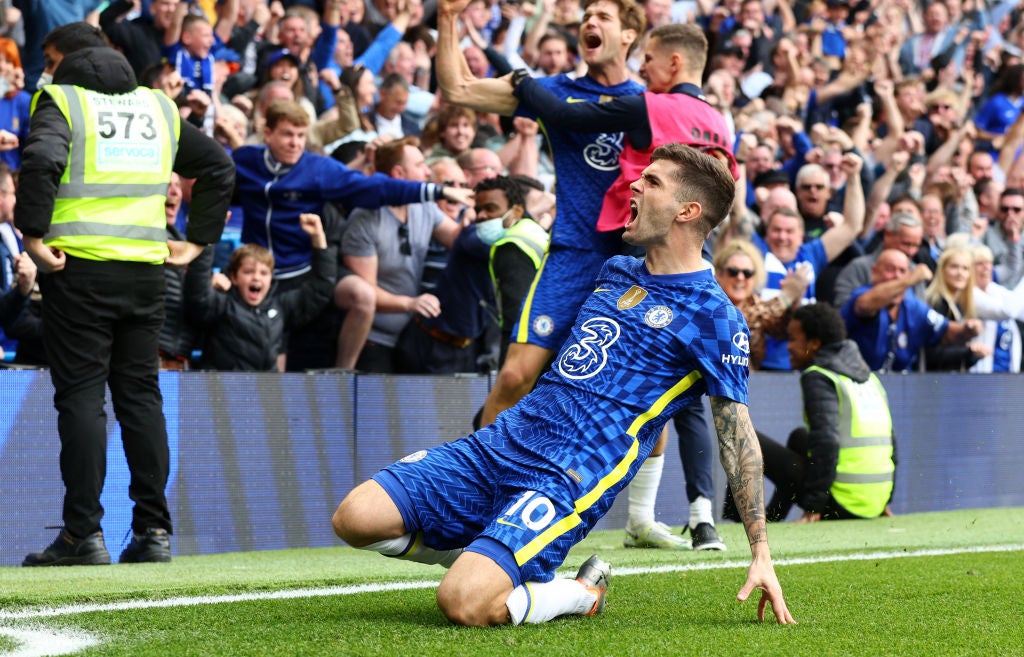 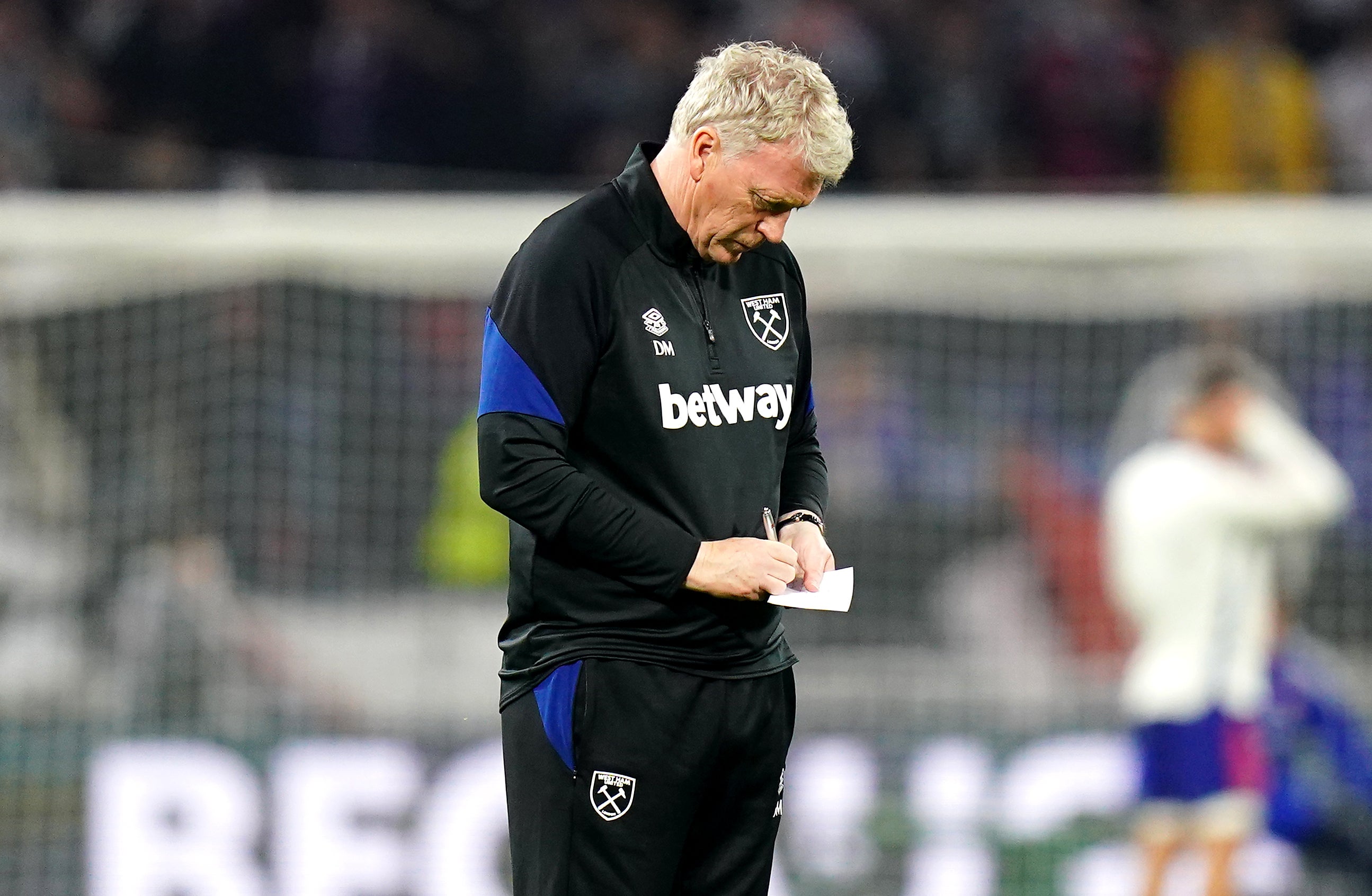 Forty-six years ago, West Ham were able to overcome a 2-1 first-leg loss to get past Frankfurt.

Now, they will hope that history can repeat itself, just for one game.