Man City’s gloating billboard after snaring Tevez from United, Figo having a PIG’S HEAD thrown at him by Barca fans and Defour shown a tifo of his DECAPITATED head… what happens when stars leave for rivals as Hakan Calhanoglu crosses Milan divide

For his own sake, let’s hope Hakan Calhanoglu knows what he is getting himself in for as he crossed the bitter Milan footballing divide.

The 27-year-old completed a dramatic free transfer from AC Milan to Inter on Tuesday, agreeing a three-year deal to join the newly-crowned Serie A champions.

Many have walked the, at times, treacherous path before him, with the Turkish international the 39th player to swap sides in the Italian fashion capital. 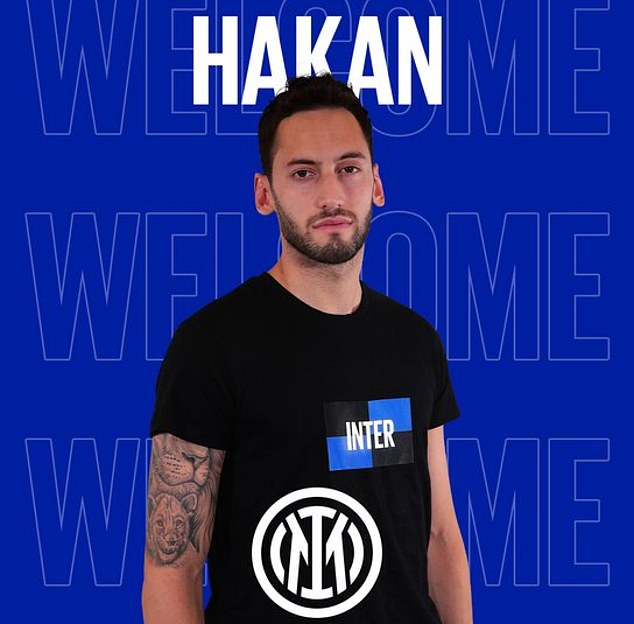 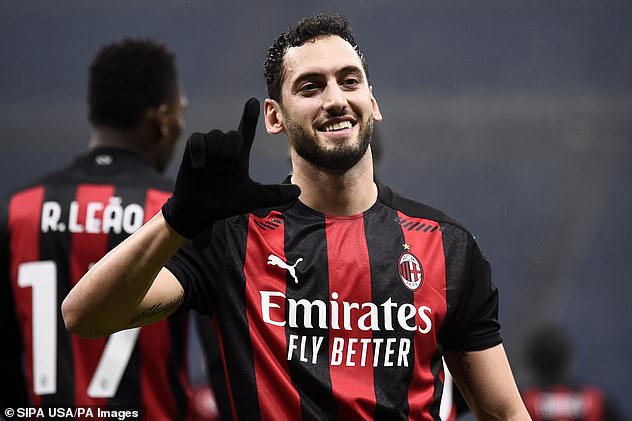 In England there was Sol Campbell going from Tottenham to Arsenal and Carlos Tevez swapping Manchester United for Manchester City.

In Spain, who can forget Luis Figo leaving Barcelona for Real Madrid and the pig’s head that followed?

So yes, let’s hope Calhanoglu knows what he has signed up for.

With that in mind, Sportsmail picks out eight moves which caused a stir and looks at how those players got on in the eye of the storm.

Easily one of the most contentious Premier League transfers ever.

Campbell had told Spurs that while his contract was running down to expiry in 2000-01 he wanted to stay. A renewal now seemed a formality.

So Campbell was off… but nobody could foresee the drama that would unfold as he turned up to a press conference with Arsenal boss Arsene Wenger to confirm he was joining the Gunners for nothing. 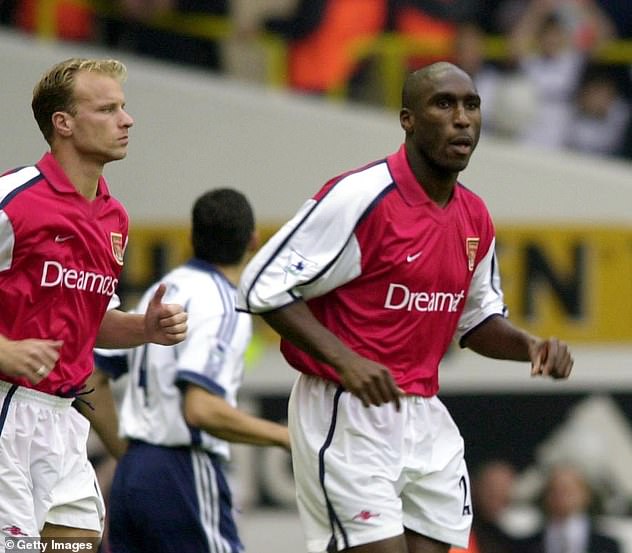 Media were stunned. Fans were gobsmacked.

To the surprise of no-one in north London it was not a move that sat well over at Tottenham, where Campbell quickly became their ‘Judas’.

Hundreds of handheld signs were held up bearing his new nickname when he returned to White Hart Lane and he was routinely booed and jeered after making a move few are brave enough to make.

But any regrets are likely to be non-existent as the move was an unquestionable success for Campbell.

The centre back went on to win two Premier League titles and two FA Cups with Arsenal.

He was a key part of the club’s 2003-04 Invincibles season and is routinely in the discussion as Arsenal’s best centre back in the Premier League era. 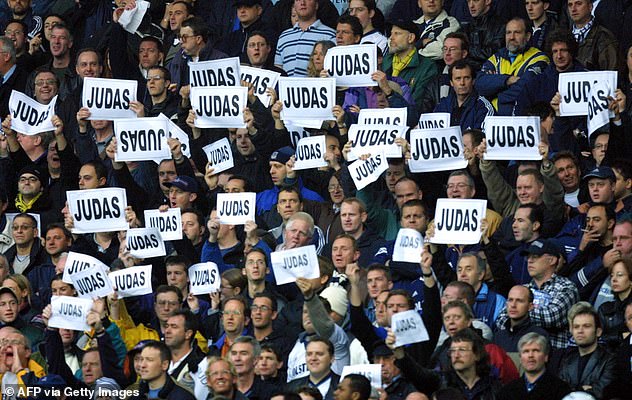 Naples quite literally went up in flames when it was announced Gonzalo Higuain was leaving for Juventus.

Jerseys with his name on were burned, thrown into sewers, cut to pieces, as fans made their feelings clear.

A banner on the Ponte Maddalena Cerasuolo in the city told Higuain all he needed to know when it came to fan reaction to his Turin switch. 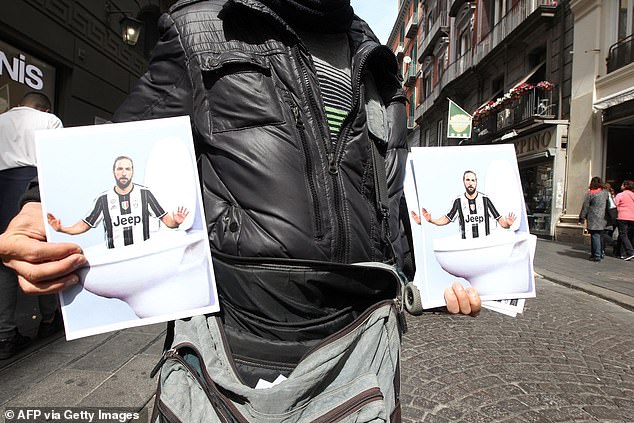 ‘Rotten Dirty Traitor,’ was the message. He was a Napoli legend, racking up 91 goals for the Neapolitan side but everything was undone going to Juve.

Juventus are seen as arrogant and Napoli stereotypes focus on the south being impoverished. It’s more than just the footballing rivalry.

From a footballing perspective there was rich success for Higuain as he won Serie A three times, won two Coppa Italia titles and came runner-up in the 2016-17 Champions League.

But his Juventus career tailed off and loans to AC Milan and Chelsea could do little to rectify it. He eventually terminated his deal and packed up for David Beckham’s Inter Miami with his brother.

Spain was stunned when Figo crossed the Clasico divide for £36.2m to join Real Madrid from Barcelona.

The transfer was bitter, the reaction fraught from those at the Nou Camp.

His first return to Barcelona was feverish and he sensibly stayed away from throw-ins and corners as oranges were thrown, cigarette lighters chucked on and some bottles were later retrieved.

Figo was Public Enemy No 1 but it was his Nou Camp return a year later that goes down in history as a pig’s head was thrown at the Portuguese star while he took a corner. 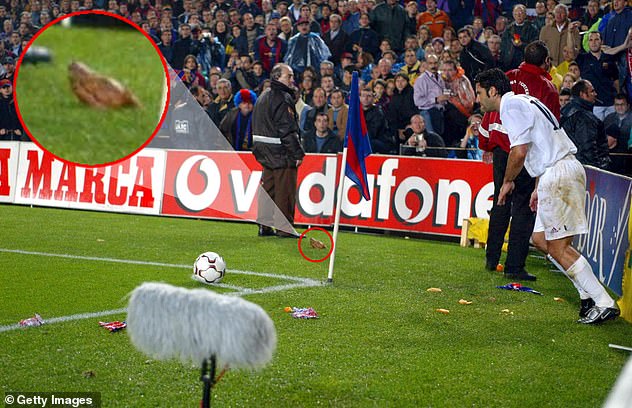 The severed head of a suckling pig. No one had quite seen anything like it.

It was so hostile that the game was temporarily halted as the referee asked Barcelona captain Phillip Cocu to appeal for calm with objects raining down towards Figo.

Much like he did at Barcelona, Figo won two LaLiga titles at Real Madrid but he did achieve at the Bernabeu what he couldn’t at the Nou Camp and win the Champions League in 2002.

There are people to this day that still feel the betrayal of this deal and it set a tone of what awaited any player brave enough to follow the Portuguese’s path.

Anyone who is made captain at the age of 19 is quite something and Standard Liege fans thought they had the player the envy of Belgium in Defour.

He guided them to their first league title in 25 years in his second season but come 2011 he had agreed a five-year deal with Porto. If he was to ever return to Belgium, perhaps the Standard love story would write a new chapter as he departed with two domestic titles.

Only when he returned, he returned to join their bitter rivals Anderlecht.

Home fans had no moral line to their protests as they unfurled a huge ‘Red or Dead’ banner which showed a tifo with Defour’s decapitated head on it. 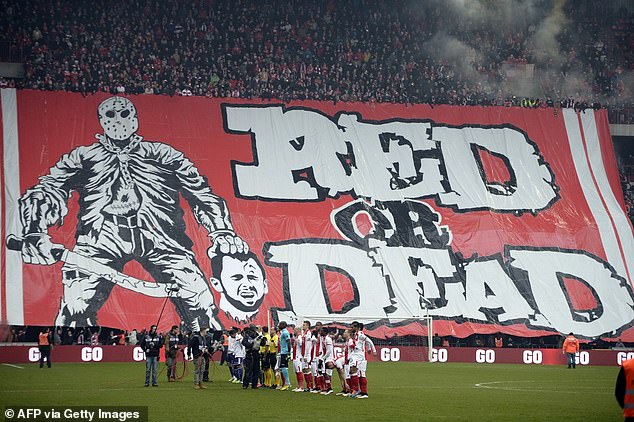 He was booed and whistled before he lost his head and snapped. Defour booted the ball into the stands to the supporters goading him and was subsequently sent off.

But even Anderlecht fans didn’t want him and protests of their own continued against their captain.

Anti-Defour banners were placed outside the ground by ultras and after one defeat he was doused in beer thrown by angry fans.

Defour, Standard and Anderlecht got so heated that he eventually chose to leave Belgium for good in 2016 and he moved to England to join Burnley.

A memorable switch – for all the wrong reasons.

It’s only a short walk across Stanley Park to get from Goodison to Anfield but it’s not a walk one takes lightly as a player.

Barmby’s conversation with Everton boss Walter Smith must have taken some confidence to make it known he wanted to leave – and in doing so leave to join Liverpool. This was the Toffees’ record signing who fans idolised.

The optics were bad.

It wasn’t like there was a precedent. Prior to Barmby’s request, no player since Dave Hickson in 1959 had dared to cross from Everton to Liverpool. Just look at the outrage now around rumours of Rafa Benitez taking the Everton job. 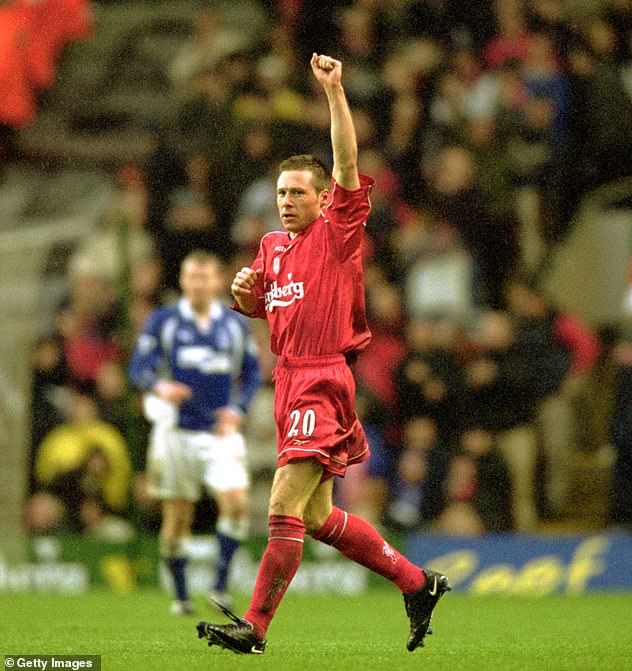 ‘You speak as though he has changed his religion,’ barked Liverpool boss Gerard Houllier when presenting Barmby, a boyhood Liverpool fan, to the media.

Barmby did hit the ground running at Anfield in 2000, helping the Reds win the UEFA Cup against Deportivo Alaves.

He also went on to lift the FA Cup and League Cup in a lucrative 2000-01 season. To add salt to Everton’s wounds, Barmby struck against them in one of the Merseyside derbies that season.

But injuries soon took hold and he managed just nine appearances in 2001-02 due to a persistent ankle problem. He tumbled down the pecking order and was sold to Leeds in 2002.

There’s some rivalries that the faint-hearted cannot cross and Glasgow’s Old Firm is not one to mess with.

Fans are fiercely loyal and despise their rival and so even with a two-year layover in France with Nantes, Mo Johnston was playing with fire in switching to Ibrox and Rangers.

The expectation was of a return to Celtic for a player that racked up more than 100 appearances and lifted a league title in 1986. So confident were Celtic of a deal, Johnston posed outside the stadium and was ready to give a news conference before it all collapsed spectacularly and Rangers, and their boss Graeme Souness, pounced for £1.5m. 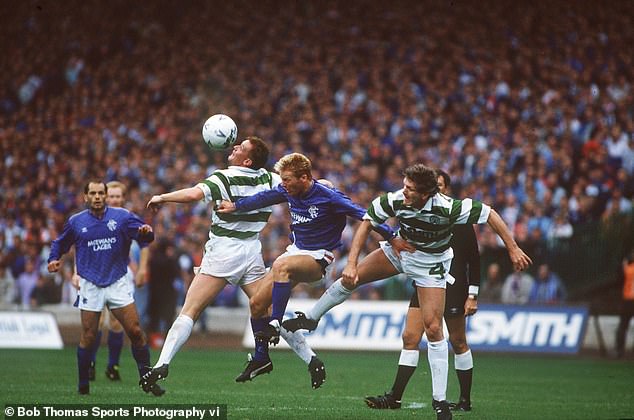 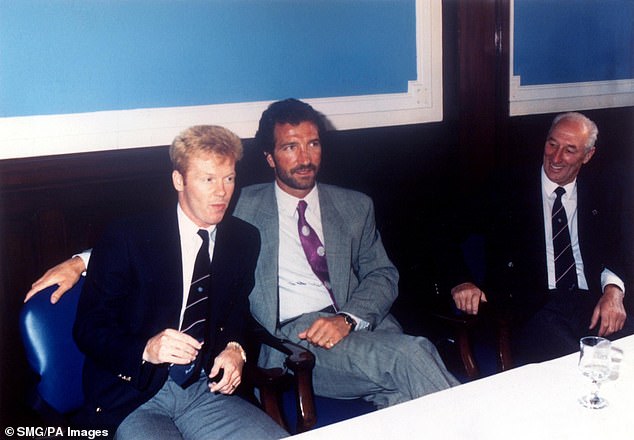 Both fan-bases were furious: Celtic because they felt betrayed and some Rangers fans did not like to see Johnston become their first high-profile Catholic player. It was, in short, complicated.

He was known as ‘Judas’ by Celtic supporters but refused to let it affect him and he went on to win two league titles with Rangers.

So committed was Johnston to winning over disgruntled Rangers fans he scored a late winner in the Old Firm against Celtic in November 1989 and that was what he later described as aa ‘watershed’ moment.

There he was, stood in the Newcastle away end at the 1999 FA Cup final, wearing a t-shirt that brought his Sunderland career to an abrupt halt.

Only weeks before Lee Clark was playing a starring role in Sunderland winning the First Division title.

Clark was a boyhood Newcastle fan and even getting him to join Sunderland was what boss Peter Reid later described as ‘hard work’. 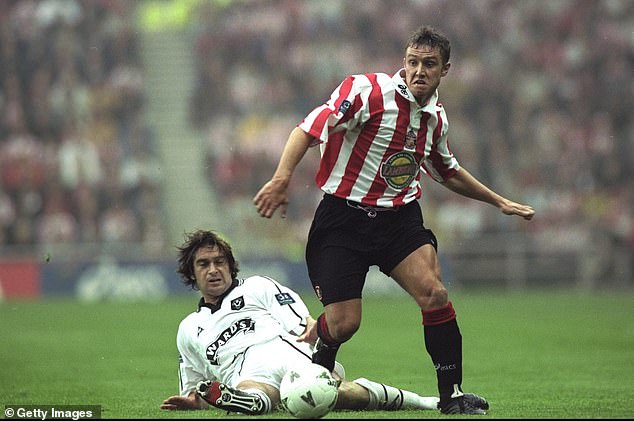 Lee Clark (right) was never forgiven by Sunderland fans after he wore a ‘Sad Mackem B******s’ t-shirt in the Newcastle away end at the FA Cup final in 1999. He was soon sold by the club

Emotions around football in the North East are often particularly fraught and laced with tribal passion, and even after a 105-point title-winning season, Clark could not hide his true colours at Wembley.

Stood in the away end in a t-shirt which read, ‘Sad Mackem B******s’, there was little way back for Clark.

The fans immediately called for the head of the Wallsend-born midfielder and he never played for the club again.

A move that was as explosive as it promised to be when it was announced.

Offered the chance of a five-year deal and a contract that would make him one of United’s top earners, Tevez and his entourage sprung a surprise.

He no longer wanted to be at Old Trafford. He wanted out. And not just out to Spain or Italy, he wanted out to ‘noisy neighbours’ Manchester City.

It was the first move between the clubs since Terry Cooke in 1999 and to say the atmosphere in the city was tense would be doing it a disservice.

City goaded United and their supporters with a blue ‘Welcome to Manchester’ banner near Deansgate. It was all very strategic, the route headed towards Salford and Trafford, two areas with prominent United support. 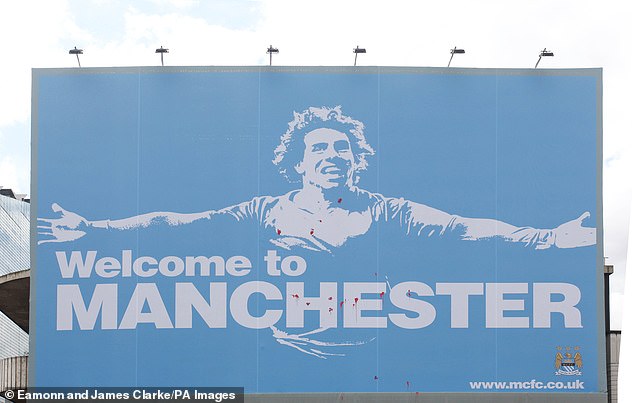 Tevez managed to soak up the animosity and use it to his advantage, winning the FA Cup in 2010-11 before adding a Premier League title in 2011-12.

At the end of his first season he was crowned Players’ Player of the Year and the following season he was made club captain by Roberto Mancini. It was all clicking into place.

But it all soon unravelled. A transfer request lodged in December 2010 – which was rejected – was the start of an incredibly ugly divorce that no doubt raised smiles in the red half of Manchester.

He lost the captaincy for 2011-12 and in September of that season he refused to come off the bench in a Champions League game against Bayern Munich. Tevez later insisted it was a misunderstanding but he was vilified and suspended for two weeks by City.

Tevez was fined heavily before eventually returning to the set-up although the damage was done and his relationship with players and fans never quite restored itself after the Munich fiasco.

He left for Juventus in 2013 after making just shy of 150 appearances for City, scoring 73 times. 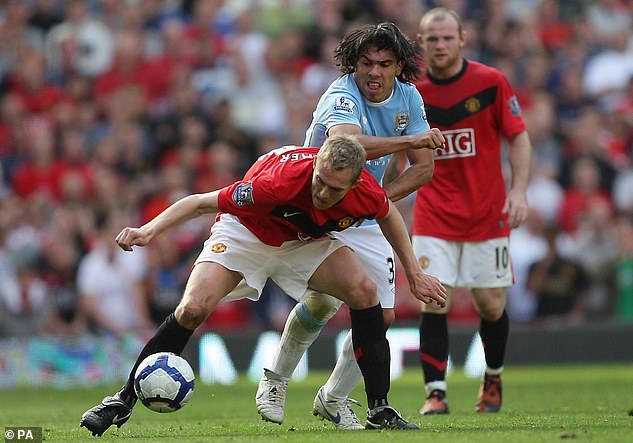