Manchester United’s long-drawn pursuit of Jadon Sancho appears to be finally petering out, with a new name on the horizon.

United, like any big club would, have decided to wind down their interest in the Borussia Dortmund starlet after re-assessing the market and discovering more cost-effective alternatives.

This has led them to a certain former Wolves man who has been lighting up the Portuguese top flight this season.

Those quick to judge may scoff at the CV of young Pedro Goncalves, but United above all other teams have proven beyond doubt that signing the correct player from the Primeira Liga can produce outstanding results. 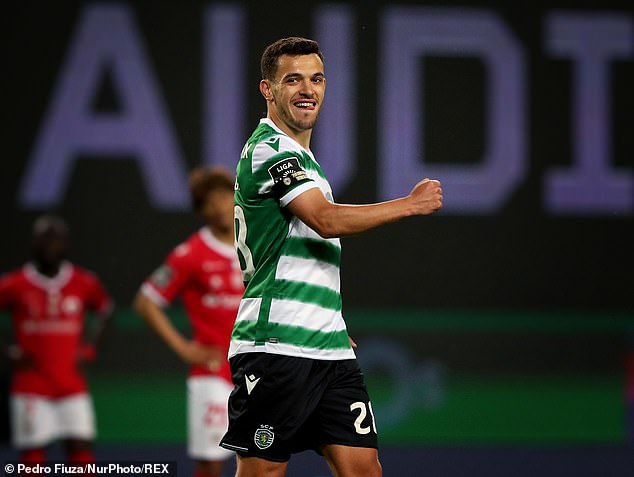 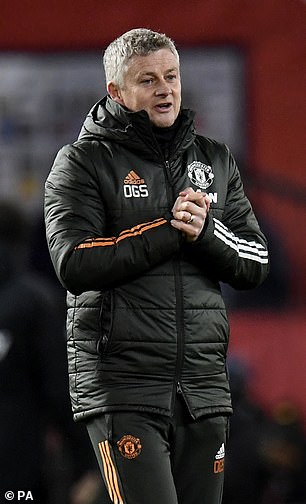 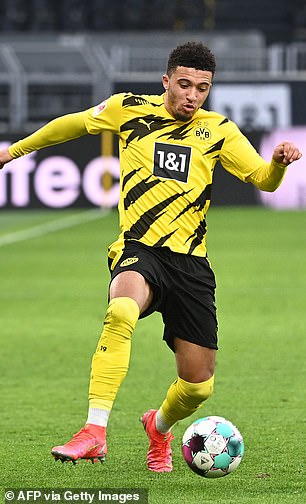 Bruno Fernandes rewarded the Red Devils handsomely after they paid up Sporting Lisbon’s asking price, and now United chiefs could be soon set to head to the Portuguese capital once more to prise away the latest gem.

But who exactly is Goncalves? Sportsmail took a deeper look…

Signing a new right winger has been high on the list of priorities for United for quite some time.

Sancho’s failed move from Dortmund left many in the Old Trafford board dismayed and fearing for the worst this season, but other stars have risen to the challenge and rocketed the side up to second place in the league.

The arrival of Amad Diallo has caused shockwaves of excitement around United’s Carrington base and, while the youngster is set to be given ample time to settle in, many believe transfer plans have been impacted as a result. 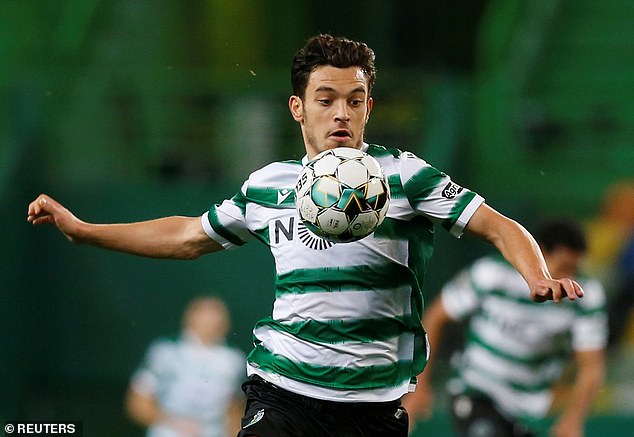 The 18-year-old Amad is earmarked as a first-team player and recently showed his credentials with a sublime header against Italian giants AC Milan in the Europa League.

Now, despite United still feeling a missing piece needs to be acquired, there is a reluctance to spend lavishly on the likes of Sancho when talent such as Amad is chomping at the bit.

The fleet-footed star has caused a stir this season with a string of dazzling performances, catching the eye of a host of elite European teams.

United have discovered that the winger has a £51.7m release clause written into his contract this summer, which is set to make him considerably cheaper than acquiring Sancho. 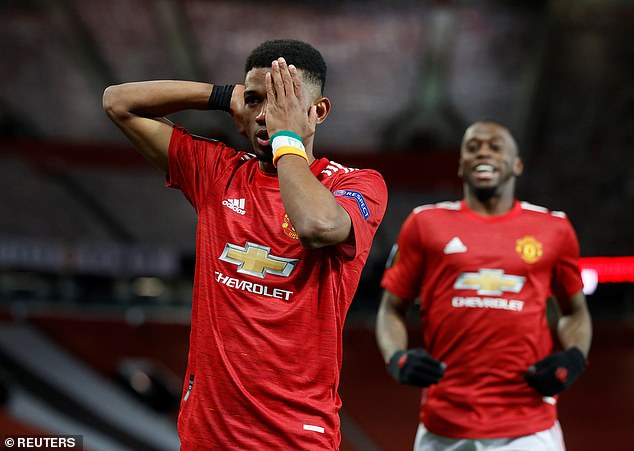 Less than 12 months ago Dortmund were demanding £117m for the England international and set United a deadline to meet their requirements, which passed by without action.

Though this figure is likely to be reduced this summer in light of Sancho’s contract having further run down, Goncalves still provides the most cost-effective option.

Goncalves is only 22 but has already been at seven clubs throughout his short career.

Aside from a five-year stint at Braga’s youth academy, Goncalves has never lasted more than two years at any one club and has shown a rapid rate of progression at each – within reason.

The youngster has actually tasted English football before with Wolves and was ushered in as part of the club’s influx of super-talented Portuguese rough diamonds, but grew frustrated after being handed just one appearance between 2017 and 2019 following his breakthrough from the youth set-up. 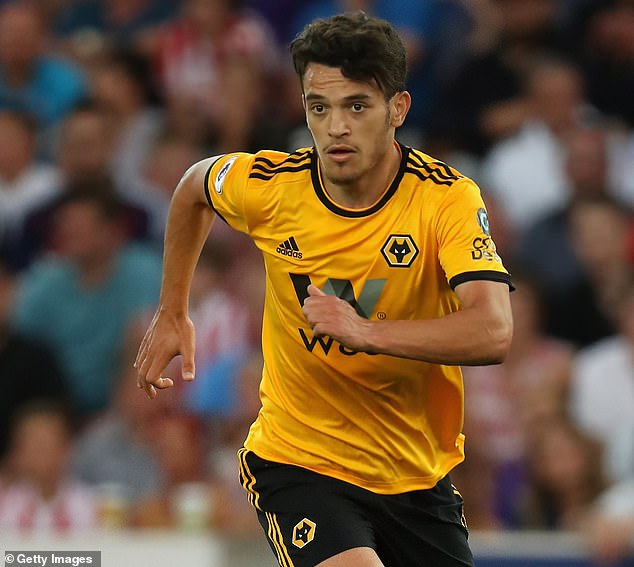 The determined Goncalves was keen to make his mark sooner rather than later, and so he returned to Portugal with Famalicao in 2019 before becoming an immediate success for the newly promoted side.

Progression occurred at a remarkable rate, with it soon becoming clear that Goncalves was the best player in the senior XI.

He spent only a season with Famalicao, yet In that time he helped fire the club to sixth place, narrowly missing out on European football; it was the club’s best ever finish in a top-flight campaign.

Famalicao were keen to retain the player who had quickly become their talisman, but had little to no chance of keeping hold of him once Portuguese giants Sporting Lisbon came knocking.

It’s important to note that Goncalves is not the same player as Fernandes and holds a rather contrasting skill set, though many similarities remain.

Both players love taking the ball into feet and being responsible for driving their team up the field.

When backed into tight spaces, both players show the awareness and delicate footwork to avoid danger and break through the hard press of an opposition.

Where Fernandes is most lethal in the middle of the park, Goncalves operates on the right though can offer his services in an attacking-midfield berth behind the strikers. 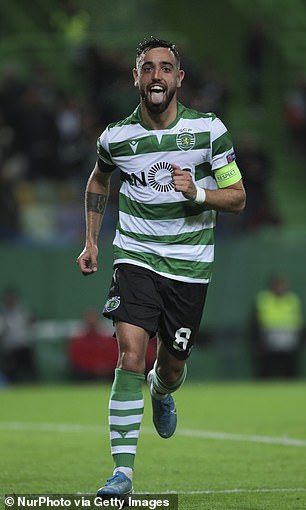 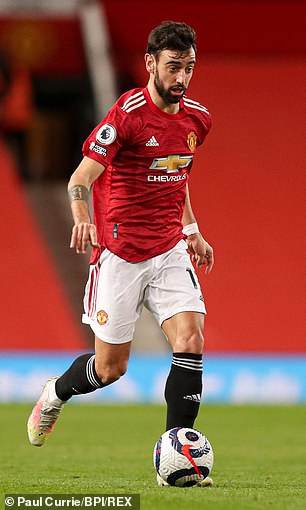 Nonetheless, despite positional differences with Fernandes, for Sporting he stepped up at the perfect time.

The absence of the formidable central midfielder after his Old Trafford departure was sorely felt, yet Goncalves wasted little time in becoming a key figure for his new club.

Sporting paid just £5m for the Portugal U21 star and now, with the hefty release clause in his deal, stand to make a staggering profit.

Currently Sporting are on the cusp of their first league title since 2002, with Goncalves playing the lead role. 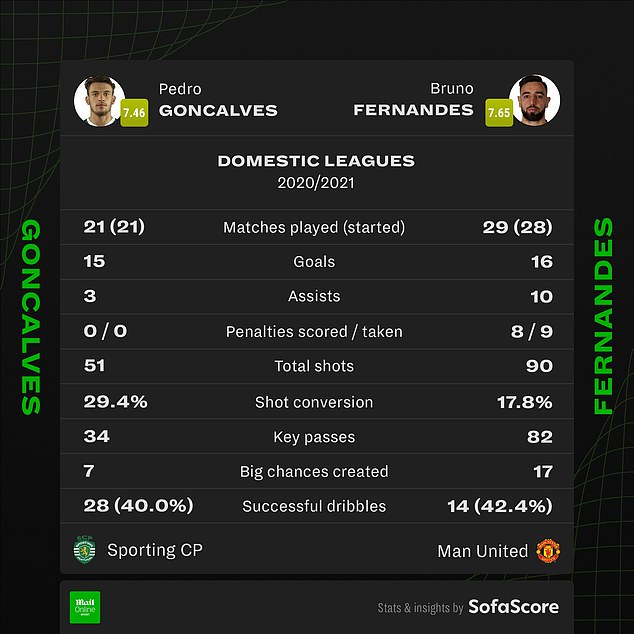 How Goncalves compares to the relentless Bruno Fernandes this season, via SofaScore

So far he has scored 15 goals in 22 games and looks a constant threat in each of the matches he plays.

Known by his team-mates as ‘Pote’, Goncalves is seen as only just entering his stride, and with the right coaching in a elite level league could become one of the most dangerous players in Europe.

Of his 15 goals this season, each of them have come from open play.

Goncalves certainly knows where the back of the net is, and the statistics indicate he is only just getting started.

An additional 11 points have been earned for Sporting through Goncalves’s efforts alone this season, and in comparison to Fernandes he is more ruthless in front of goal. 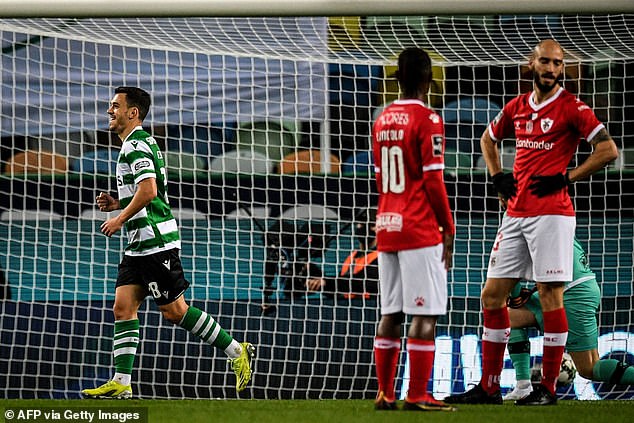 While United’s midfield magician has a quite unbelievable goals-to-game ratio, a heavy portion of this is supplemented with strikes from the penalty spot, of which Fernandes is clinical.

Likewise, when compared against Sancho, Goncalves also comes out glowingly.

One could argue that the Bundesliga is a more testing league than Portugal’s top flight, and that Goncalves is older than Sancho – nonetheless, his ruthlessness in the final third outshines the young Englishman.

Sancho has six goals this season with one of those coming from the penalty spot, compared to Goncalves’s 15.

The Dortmund star does have nine assists whereas Goncalves has recorded just three, but the new-look United under Solskjaer are more than happy for play to run through Fernandes in order for others to find the back of the net. 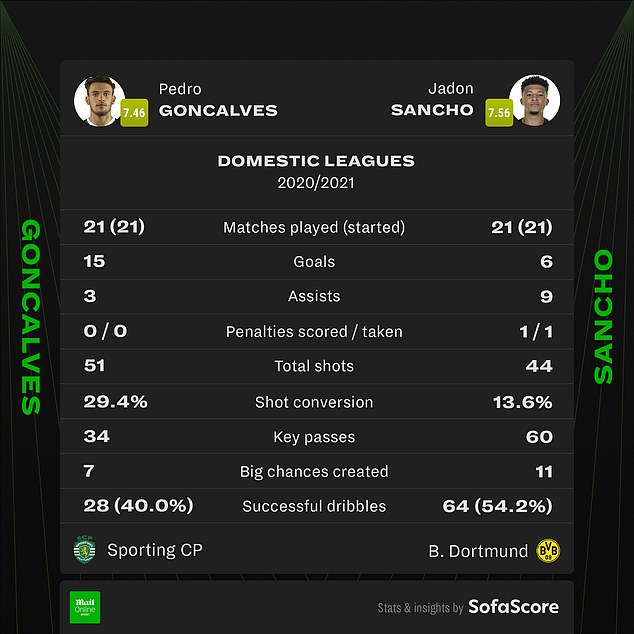 Given their performances this season, the cheaper Goncalves appears to be a better option than Sancho given the goals he offers for the team, via SofaScore

In terms of big chances created, Sancho edges it with 11 so far compared to eight from Goncalves. The former Man City man also has a slightly more successful dribble rate of 54.2% whereas Goncalves’s stands at 40% exactly.

There is room for vast progression in both players, and one would argue that the percentage differences produced by Sancho account for his current market asking price being much higher.

In Sancho, United would be getting a player who can make things happen and slowly turn the tide, whereas Goncalves comes across as a star who is quick to seize the limelight and find the back of the net.

Bar any late meltdowns in the final weeks of the season United are set to retain their Champions League status next season and benefit from the riches that come from this. 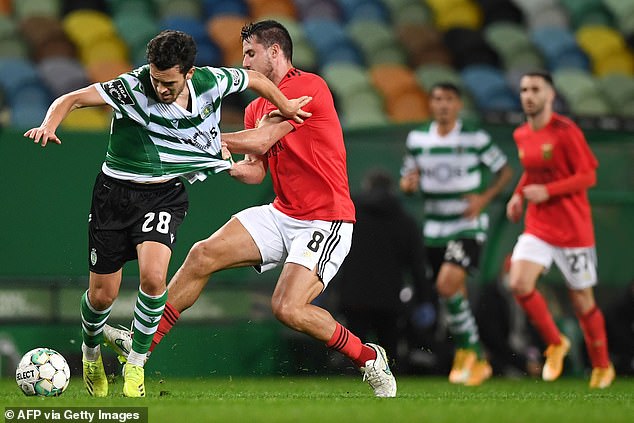 His meteoric progress in the last 12 months make his £51.7m release clause look like a steal

To that end, being able to buy a player who is performing to a similar level to Sancho yet costs less money makes a whole lot of sense.

Solskjaer would reap the rewards of additional financial reserves after buying Goncalves to delve further into the market, while in the Portuguese star they would be acquiring a player who is desperate to prove himself in English football after a brief, underwhelming stint.

For United supporters, these are exciting times indeed.