Wilfried Zaha has reportedly told Crystal Palace that he wants to leave the club this summer. Zaha has previously come close to the exit at Selhurst Park and has now drawn a line in the sand ahead of the opening of the summer transfer window.

Palace are braced for a tumultuous off season after the announcement that Roy Hodgson would step down as manager at the end of the 2020/21 season.

As well as appointing a new manager, the south London club have a lot of players whose contracts are set to expire at the end of June.

While striker Christian Benteke has already committed to the club by signing a two-year contract extension, many others will leave Palace.

Zaha came close to joining Everton in 2019 after the Toffees offered £70million plus Cenk Tosun and James McCarthy, only for Palace to reject the approach.

The Ivory Coast international, who contributed 11 goals and two assists in 30 Premier League appearances this season, has previously been linked with Arsenal and Tottenham. 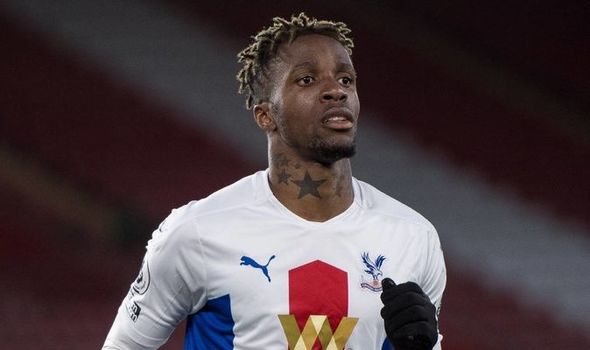 According to The Times, he has decided that he wants to call time on his six years at Palace and secure the move he feels he deserves.

The report states that the winger wants to seal a move away from Palace before the squad returns for pre-season training next month.

The 28-year-old still has two years left on his contract, worth £120,000 a week, so will likely not come cheap for any club interested in acquiring his services.

Palace valued him at around £100m two years ago when Everton and Arsenal pursued him, but may well be willing to accept less this summer.

Zaha has registered 68 goals and 72 assists for Palace since joining the club in 2015 after an ill-fated and brief stint with Manchester United.

Four Tottenham players Antonio Conte can reinvent to save millions

He has not been shy about expressing his desires in the past and Hodgson recently said the club would “see what happens” at the end of the season.

Zaha himself went even further in an interview last month, telling The Face: “I feel like I can have another shot at the top teams, because my dream is to win things.

“I’m good enough to go out there and compete with the best.

“If the opportunity came, I wouldn’t turn it down, because I feel like I deserve it. It’s so I can show my kids: ‘this is what daddy won’.”

Tottenham are also in a state of flux, with chairman Daniel Levy yet to appoint a successor to manager Jose Mourinho and star player Harry Kane agitating for a transfer.

Liverpool vs Brighton live stream: How to watch Premier League fixture online and on TV tonight