Copenhagen: The Manchester City juggernaut ground to a halt in the unlikeliest of places on Tuesday (Wednesday AEDT).

FC Copenhagen, a team languishing in the bottom half of the Danish league, became the first team to stop City from scoring this season as a Champions League group match overshadowed by early video review decisions ended in a 0-0 draw.

One of those VAR calls resulted in a red card for City left back Sergio Gomez in the 30th minute for pulling back Hakon Arnar Haraldsson as the last man, harming the visitors attacking ambitions at the atmospheric Parken Stadium.

Earlier, City midfielder Rodri had a brilliant long-range strike disallowed after VAR spotted a handball by Riyad Mahrez in the build-up.

Then, following another review, City was awarded a penalty after a free kick swung into the area struck the outstretched arm of Copenhagen defender Nicolai Boilesen. Mahrez, who has been increasingly reliable from the spot, saw his effort palmed away by Kamil Grabara.

Prolific striker Erling Haaland started the game on the bench — perhaps with an eye on Sunday’s Premier League trip to Liverpool — and didn’t come on. 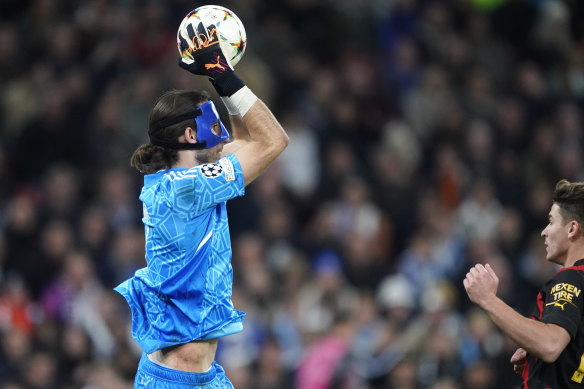 City manager Pep Guardiola said Haaland, who has scored 20 goals in 12 competitive games in his first season with the English champions, wasn’t in good enough shape to start after playing against Southampton in the Premier League on Saturday.

“Yesterday was not good, today a little better but not perfect, so we decide not to take the risk,” Guardiola said of Haaland.

City, who won their first three Group G games, would have secured a place in the last 16 with a win. That could still happen if Borussia Dortmund avoid defeat at home to Sevilla.

It was only the second time City has drawn 0-0 in the group stage of the Champions League. 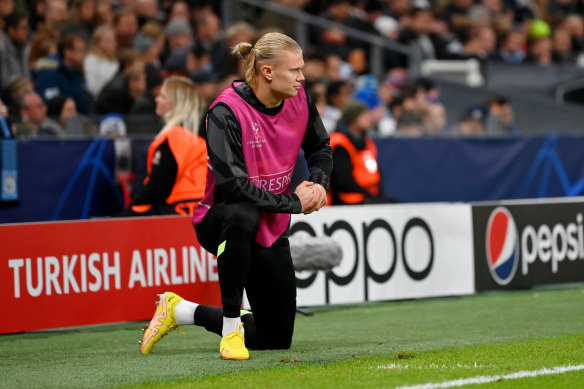 Erling Haaland watches on from the sideline.Credit:Getty

“We started really well with 11, then we had an hour and 10 minutes to hang on,” Guardiola said. “When we had the ball we were clever. It’s a good point.”

It was a second point earned in group play by last-placed Copenhagen, keeping alive its chances of a third-place finish and dropping into the Europa League play-off round.

“It was another tough game against one of the best teams in the world,” Copenhagen midfielder Marko Stamenic said. “I think we can leave the stadium proud of ourselves and our team. We fought to the very last minute.”

In Wednesday’s other early kick-off, Juventus’ 2-0 loss at Maccabi Haifa marked a new low for the Serie A side but coach Massimiliano Allegri remained steadfast and ruled out stepping down despite the Italian club’s poor run of form.

Juve had never lost three of their first four Champions League group games and although club president Andrea Agnelli said he was ‘ashamed’ by their performance, he added that Allegri would remain in the job.

“He’s right (to feel ashamed), it was the worst first half,” Allegri told Sky Sport.

When asked if he would resign, he added: “No, I’m not going to step down, absolutely. Because it’s a challenge now. When it gets harder, it’s even more beautiful. We must come out of it with courage and desire.”

The loss was Juve’s fourth in six games in all competitions, which does not bode well ahead of Saturday’s Turin derby at Torino. Juve are eighth in Serie A, 10 points behind leaders Napoli.

For Haifa, it was their first victory in a Champions League game since they beat Olympiakos Piraeus in the group stage in 2002.

“It’s difficult to explain (what went wrong), we just need to be silent because we did not have a good performance from the character point of view,” Allegri said.

“We need to get out of this situation and keep quiet. Our tactics lack heart and passion. We play too individually, we have to go back to being a team.”

Fantasy Premier League: Rule changes and all you need to know as FPL returns