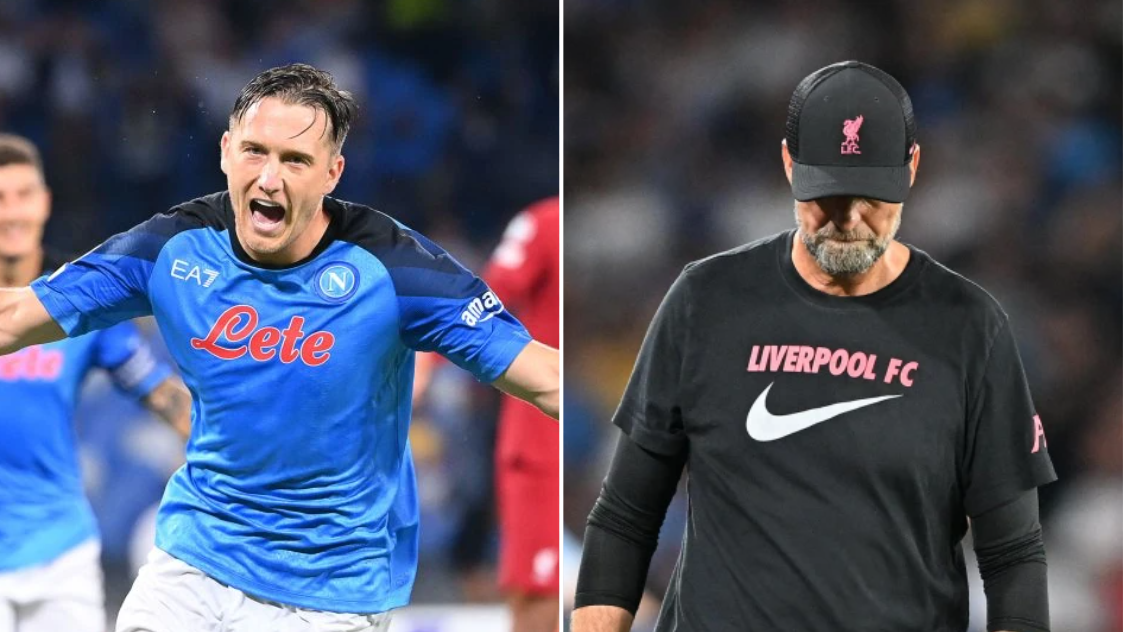 Jurgen Klopp has slammed Liverpool’s performance in their 4-1 defeat to Napoli in the Champions League on Wednesday night and says next opponents Wolves will be ‘laughing’ at the prospect of playing them at the weekend.

The Merseysiders – last season’s beaten finalists – gave a woeful first-half display in Naples and went into the half-time break three goals down, with Piotr Zielinski opening the scoring after just five minutes from the penalty spot.

Napoli saw another spot-kick saved before Andre-Frank Zambo Anguissa doubled the scoreline while substitute Giovanni Simeone netted just minutes after coming on shortly before the break.

Liverpool’s back-line looked shambolic at times and Joe Gomez was sacrificed at half-time, though that did not stem the flow of the game and within two minutes of the restart Zielinski had netted a fourth goal for the hosts.

Luis Diaz fired back almost immediately but it did not kickstart a comeback, with Napoli seeing out a 4-1 victory to equal Liverpool’s worst-ever result in the Champions League.

Klopp was visibly dejected during the match and apologised to travelling supporters after the full-time whistle, while he was scathing of his side’s display in his post-match media duties and feels they need to ‘reinvent themselves’.

Speaking to BT Sport, he said of the result and performance: ‘Really tough, tough to take, I would say not that difficult to explain when you saw the game. The start with the two penalties. First and foremost Napoli played a really good game and we didn’t, that is the first explanation for the defeat.

‘The two penalties we concede are both – for sure one – a little bit unlucky but maybe you give them, only one goes in. Then the next two goals we served on a plate, that’s not cool and we should defend better in the first place and then in the last moment as well.

‘And then 3-0 down, having chances but never really in the game, we were not compact, neither defensively or offensively. Until Thiago entered the pitch I cannot remember one counter-pressing situation and the reason for that is we were just too wide.

‘We tried to sort the situation ourselves with a little dribbling here or there, but cannot really play together or not connected. So it was everything obvious, but why it happened I cannot answer it now. Give me a little bit of time to think about it. It’s a really tough defeat to take, but I have to take it.’

He added: ‘It looks a little bit like we have to reinvent ourselves, so it’s really a lot of things lacking, not in all games but now. The fun part is we have to do that [reinvent ourselves] in the middle of a Premier League season and Champions League campaign.

Andy Robertson echoed his manager’s appraisal of the performance, saying: ‘We were miles too open. You can’t come to a place like this and not be compact. They were by miles the better team.

‘Too many times they had spaces to run at us and cause us problems. You come away in the Champions League and you can’t be wide open like that. We have to get back to basics and be compact.

‘We deserve this result. The way we were wide open they found so many spaces. It felt like they had an extra man. You have to be ready to fight. We weren’t close enough to our mate. We have to wake up and quickly because we can’t perform like that.’

Liverpool’s 4-1 loss to Napoli is the same margin of defeat they suffered in 3-0 defeats to Real Madrid and Barcelona in 2014 and 2019 respectively.