The Blues trail 2-1 going into Sunday’s match after losing the first leg in Germany, but Melanie Leupolz’s away goal has given them a potential lifeline in the tie.

The WSL leaders have had a full week to prepare for the return fixture at Kingsmeadow, which could keep their quadruple hopes alive, but Hayes is insistent her side approach the game like any other.

“I’m really fresh. I’ve had a day off, I’ll have another day off on Friday,” Hayes said.

“I’m going to make sure everyone in this environment behaves exactly the same way they behave every day because anything else means you’re preparing for an occasion.

“No one’s getting married. It’s a game of football, it’s our job. 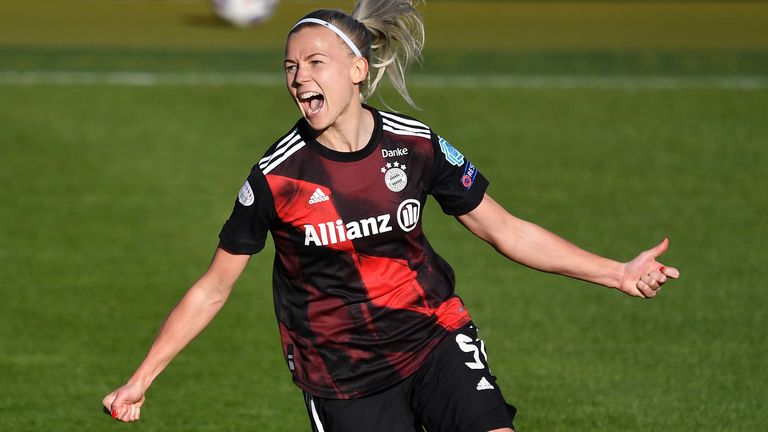 “Being a pro is doing these things all of the time, you can’t switch them on and off. That’s what we’ve cultivated over the years.

“It doesn’t matter if this is Bristol this week or Bayern Munich, I promise you we will prepare in the same way.”

Chelsea know a 1-0 win on Sunday would be enough to put them into their first Champions League final, but Hayes feels that keeping a clean sheet might be unlikely.

“The realities are, if we’re going to progress, we’re probably going to have to score more than one goal,” Hayes said.

“For us, let’s focus on doing what we’ve done so well this season going forward, eliminate the errors because ultimately both their goals came from poor defensive mistakes from us.

“I trust the group, I trust what we know and just deliver the performance I know we’re capable of.”

Bright wants ‘performance of our season’

Speaking after the first leg defeat, Hayes pledged her Chelsea players would give the performance of their lives at Kingsmeadow and that sentiment has been echoed by defender Millie Bright.

The centre-back believes the current squad has the mentality to produce a comeback.

“There’s definitely more belief there,” Bright said. “As a squad we’ve always had a strong mentality, we’ve always wanted to go on and push for the final.

“We’ve got the depth in the squad this time to go and do that but the mentality is to go and win the game on Sunday, put in the performance of our season and prove that we deserve to go through.

“We’ve got to get the job done on Sunday before we think about anything else but there’s lots of positives from the away leg to take into that game.

“It’s been a tough season but I think we’ve really come together as a group in these difficult times. With every setback there’s been a stronger comeback. I think we’ve learned a lot about ourselves.

“No matter what trophy we’re competing for, we always want to lift it.”

Marca's headline of 'Cadiz win, we all lose' really stands out