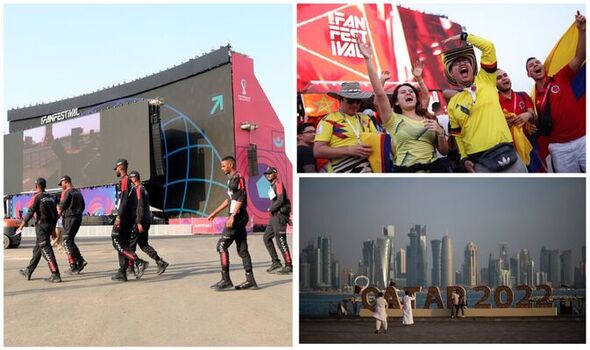 The World Cup in Qatar has descended into farcical territory after it emerged that a family with three children were reportedly barred from entering a fan park on the day of its opening, once again casting doubts over the nation’s suitability to host the tournament. The World Cup hosts opened the gates to fans to the newly-designed fan areas in Al Bidda Park for fans to get into the spirit on the eve of the continent’s first ever World Cup, but logistical problems dogged the event.

Fans were left frustrated after being forced to wait in queues for two hours to attend the official opening of the FIFA Fan Festival. As temperatures soared beyond 30 degrees celsius, supporters were told they would not be able to purchase water. There are also no water fountains in the surrounding areas, leaving some parched in the Doha desert.

The 40,000-capacity park, based in the capital Doha, had been due to open its gates to the travelling fans from 4pm on Saturday. However, huge lines formed outside with football fans eager to get inside before the venue reached its capacity and the doors did not open until 4.30pm.

In one instance, a report from The Daily Mail claims an American family had ‘waited for 45 minutes’ in the queue, only to be instructed to leave when they reached the gate as their three young children would be prohibited from entering the venue.

“We can’t go inside with the children, they are saying it won’t be so nice for them in there,” the mother of the children was quoted saying by the Daily Mail. “We will probably go somewhere else to one of the Souqs.”

Fans had been in ‘high spirits’, with supporters represented from South American nations such as Mexico, Argentina and Ecuador all reportedly ‘singing together’ and no trouble was reported.

But people started to become frustrated when the doors did not open at 4pm, with officials failing to explain the reason behind the delay before fans were able to enjoy the facilities until late in the evening, with music and entertainment on offer.

It is the latest issue that has hit organisers after a seemingly endless list of issues experienced by fans. Accommodation in the fan villages have proved to be largely inadequate for essentials such as water supply, while some facilities have been exposed to be in poor condition.

In other areas of the region, fans were spotted queuing to purchase beer for the first time, just days after FIFA agreed to demands from the Qatari Government to ban sales of alcohol within and around World Cup venues, apart from hospitality.

There have also been highly visible arrangements of Qatari police forces remaining on guard in fan areas as organisers have stepped up security in case of trouble erupts. However, there have been very few instances of crowd disturbances reported – if any – so far on the eve of the tournament.