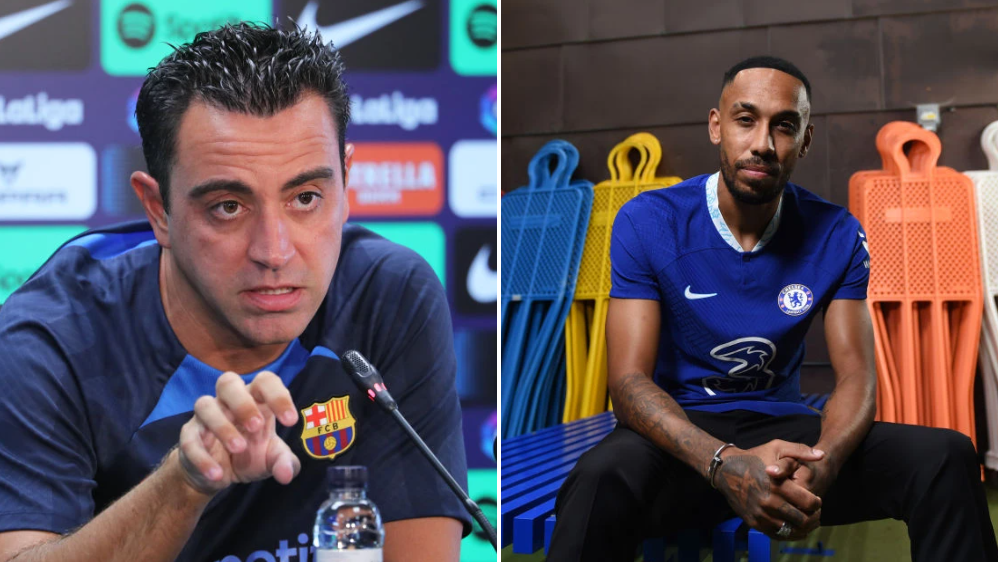 Xavi admits he ‘feels bad’ after Barcelona decided to sell Pierre-Emerick Aubameyang to Chelsea and has described his former striker as a ‘jewel’.

Chelsea signed ex-Arsenal captain Aubameyang for £10m on deadline day, with Blues defender Marcos Alonso moving to the Nou Camp as part of the deal.

Aubameyang only completed a dream move to Barca six months ago and Xavi admits he was reluctant to lose a player who was ‘an example on and off the pitch’.

In 23 games for Barcelona last season, Aubameyang scored 13 goals including a brace in a memorable 4-0 win over El Clasico rivals Real Madrid.

‘I feel bad because he helped us a lot,’ said Xavi. ‘He was an example on and off the pitch.

‘He made a big difference – look at his numbers. As a person, he’s a jewel and always training with a smile on his face.

‘It’s a shame because you want to have these type of players in your squad but it was a good opportunity for him and for the club as well.

‘We needed to put the pieces of the puzzle together and in the end, I think we’re all happy.

‘But I feel bad as a coach to lose a player like Aubameyang. He was an example for the club and for all players.’

Aubameyang sent a farewell message to Barcelona’s fans shortly after becoming a Chelsea player and says it was an ‘indescribable’ feeling to play for the La Liga giants.

He posted on social media: ‘Culers, six months spent with you, but it seems like six years.

‘All the heart I’ve received is indescribable and especially these days I wish you the best and I hope to see you soon. Thank you.’

On his move to Stamford Bridge, Aubameyang added: ‘I’m really happy. It’s an honour to be part of this team and I can’t wait to start.

‘I have some unfinished business with the Premier League so it’s good to be back and really exciting.’