Home » Sports News » All out for 32: NSW rolled for record low in stunning Shield collapse

NSW have been dismissed for their lowest-ever Sheffield Shield total following a stunning collapse at Blundstone Arena.

Batting after Tasmania were all out for 333, NSW were dismissed for just 32. 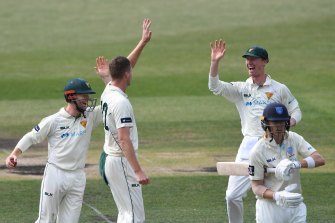 It is the fourth lowest total in the 129-year history of the Sheffield Shield.

Victoria have the third lowest total. They were rolled for just 31 in 1907.

In the six-ball over era, only one other team has been dismissed faster than the 19.3 overs it took Tasmania to roll through NSW.

NSW product Jackson Bird was the bowler who inflicted the pain on the visitors.

The quick finished with career-best first-class figures of 7-18 from just 10 overs.

Opener Daniel Hughes, first drop Daniel Solway, No. 4 Kurtis Patterson and Nathan Lyon were the four NSW batsmen to be dismissed for a duck.

Peter Nevill was the only batsman to reach double figures. He finished with an unbeaten 10 runs.