Alex Carey did his hopes of a Test debut no harm with a sparkling one-day century on Sunday but Australian assistant coach Andrew McDonald believes the battle between him and Josh Inglis to replace Tim Paine as the country’s next wicketkeeper is “really up in the air”.

Ten days out from the first Ashes Test in Brisbane, Carey blasted 101 from 93 balls in South Australia’s limited-overs match against Queensland at the Adelaide Oval in an innings that would have restored some confidence.

Carey, a familiar face in Australia’s one-day and T20 teams in recent years, has struggled in the Sheffield Shield this season, making 153 runs at an average of 21.85.

While the Test arena is an entirely different beast to domestic one-day cricket, the knock will be fresh in the mind of selectors before an intra-squad match scheduled to begin on Wednesday, pending some wet weather forecast for Brisbane. Both Carey and Inglis will feature in the match.

Carey was in fine touch before having his middle stump knocked out of the ground by a Marnus Labuschagne delivery that didn’t turn.

Paine, who resigned as captain earlier this month following a sexting scandal, has taken an indefinite break from cricket and in doing so, left the door open for a new Australian Test ’keeper to make their debut for the first time since Peter Nevill in 2015. 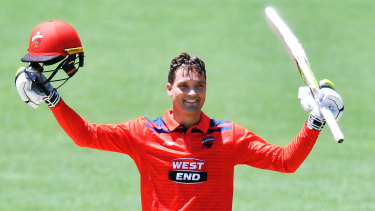 Inglis will be hoping Wednesday’s intra-squad match goes ahead given his limited chances to impress following his stint with Australia’s victorious T20 World Cup squad.

“I think it’s still really up in the air. If it was clear then there may have been an announcement,” said McDonald on the battle between Carey and Inglis to take the gloves for the first Test at the Gabba on December 8.

“Obviously Painey stepping away from the game has opened that slot up and selectors will work through that. It’s white-ball cricket, but any form is good form.

“We’ve obviously got Josh Inglis in camp with us at the moment, so he’s starved of match opportunities. Alex Carey was named in the Australia A squad as a keeper as well. We’ve got some options there and that’s the beauty of it. Look forward to whichever way that goes and the start of someone’s Test career.” 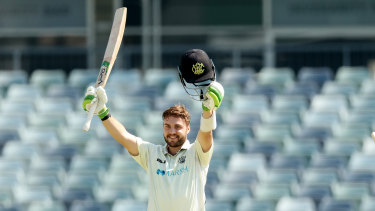 Josh Inglis could make his Test debut against England at the Gabba. Credit:Getty

Carey has been viewed as the next wicketkeeper in line for a number of years but Inglis, who moved to Australia as a 14-year-old after being born in England, has burst onto the scene and could get the nod for a Test debut.

There is a degree of flexibility about the upcoming intra-squad game, which is scheduled to take place from Wednesday to Friday in Brisbane.

A decision on who will replace Paine may not be made until next Sunday, when the squads will split into Australia and Australia A groups.

Even if wet weather spoils Australia’s preparations, McDonald says Australia will be firing when it matters.

“I don’t think there will be too many excuses come that first session at the Gabba,” McDonald said. “I think we’ve made the best of what we’ve had. We’ve only missed one session up here, which was a hitout in the centre. We’ve been able to creep a few more overs into the guys in other sessions. We feel they’re right where we need them to be.”

His combination with Steve Smith, the side’s new vice-captain, is one McDonald believes will flourish.

“He’s going to draw upon that experience, he’s got a lot of other senior players around him as well, so we’ve got great confidence that the players who are going out on the field amongst each other will be able to problem-solve on the go.”

England captain Knight admits Pakistan cancellation was made "above our heads"