Arcadia Prince might be the rank outsider in Saturday's feature event, the CF Orr Stakes, but for trainer Amy McDonald – who spends most of her time training jumps horses – just having a runner in the race is a career highlight.

The small-time Ballarat trainer, who has 17 horses in work, has only once had a stakes runner before, and that was just two weeks ago when the Prince made his stable debut in the group 2 Australia Stakes. 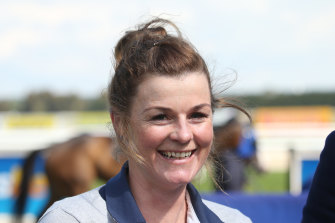 In another lifetime, the former Bob Peters-owned galloper was a progressive and exciting prospect. In the cerise and white, he won seven of 16 races in Perth, but like his star sister Arcadia Queen, feet issues have troubled the son of Pierro.

It got to the point where Peters had had enough.

“We were enquiring about another horse in WA that Bob Peters owned, a stayer to go jumping, and they said, ‘That horse isn’t for sale but we have this one,’” McDonald said.

“We’re just like, ‘It’s got to be broken, there must be something wrong with it.’ I think Bob had just had enough of his feet issues and he basically said, ‘I’ve got a heap of good horses’ and the sister is very good and obviously he had just come to the end of his tether with him.

"[His feet] were really, really bad, through no one's fault, it's just the way they're put together. I think the Queen had a few issues with her feet as well and we all know the story of her having bar shoes on and that stuff.

“He had a massive abscess blow out that basically took off half the sole of one of his feet when he arrived, so it just took ages to grow out. For us, time is not a bad thing because a horse like him could be anything for us.”

For McDonald, picking the eyes out of tried horses who have found their level at some of the bigger stables is her best chance of working her way up the training ranks.

“When you’re in my position you’ve sort of got to work your way up from the bottom,” she said. 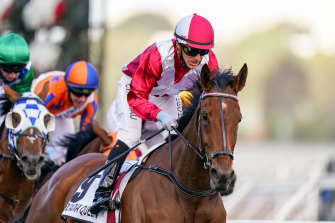 “You have to punt it with your own money and you have to convince people to give you a go and unfortunately for me, people don’t sell fast horses unless there’s anything wrong with them.

“You just have to weigh up whether or not you think you can turn them around or offer them something different because quite often they’ve come from really good trainers who have been in the business and training horses for a lot longer than me.”

On Saturday, she's up against some of the best. The favourite of the race, Cox Plate winner Sir Dragonet, was an expensive purchase from overseas, bought to win the best races Melbourne has to offer, while her rival trainers include the likes of Chris Waller, Ciaron Maher, Danny O'Brien and Team Hawkes.

But McDonald is excited just to be there.

“It’s a pretty amazing thing I think, just being able to enter a horse in a group 1 let alone accept for one and go around, all being well. It’s pretty awesome, I’m just pleased,” she said.

“You could spend your whole life never having a runner in a group 1 and while I know he’s the outsider, I don’t think he’s going to disgrace himself. I think he’s gonna run well and that might be being beaten and running last but he’s not going to look like a fool being there.”

Race-by-race tips and preview for Tamworth on Tuesday