Southampton: Australia have lost their T20 series to England in straight sets at Southampton, unable to defend a modest tally of 7-157.

The game was defined by some ferocious fast bowling early on from the hosts, who went on to win by six wickets, reaching their target with seven balls to spare. 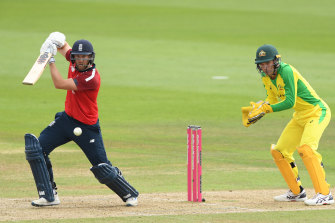 Dawid Malan was solid early on for England during the chase.Credit:Getty Images

Opener Jos Buttler was unbeaten on 77 from 53 balls as the hosts saluted, sealing the victory with a gigantic straight six off Adam Zampa. Buttler finished the job after adding 87 for the second wicket with Dawid Malan, the latter holing for 42 in the 14th over.

When Ashton Agar won his wicket, as he did Tom Banton’s shortly thereafter – then Eoin Morgan was caught at cover from the final ball of the 17th over – there was a glimmer of hope after Friday’s late twist. However, Moeen Ali then Buttler both clouted Zampa into the stands during the penultimate over to ensure the script would be straight forward this time around.

Earlier, after winning the toss and batting first, Australia’s dependable opening partnership was broken from the third ball of the match when David Warner was sorted out by a brute of a delivery from Jofra Archer. There was little Warner could do about it as the ball kissed his glove on the way through to Buttler. Alex Carey, elevated to number three, was also caught behind in the second over, Mark Wood finding his edge with a 150km/h offering. 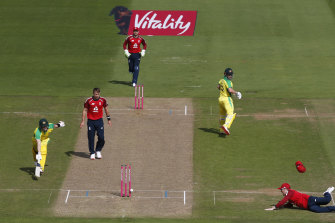 From 2-3, Aaron Finch and Steve Smith made it to the other end of the rapid opening burst but when the former captain when was ran out by an Eoin Morgan direct hit from mid-on from the final ball of the fifth over, the visitors were reeling at 3-30. The current skipper and Marcus Stoinis settled, putting on 49 for the fourth wicket, but fell consecutive overs – Finch (40) dragging Chris Jordan on before the all-rounder edged Adil Rashid to slip for 35.

The final eight overs fared better for Finch’s lower-middle order, Glenn Maxwell and Ashton Agar ensuring that the innings wouldn’t fall in a heap – making 26 and 23 – before Pat Cummins enjoyed a wayward Archer over to finish, worth 18 to Australia.

Mitchell Starc was on song with the ball inside the power play too, dismissing Jonny Bairstow, the first Englishman ever out hit wicket in a T20 when knocked off balance by a bouncer. However, the game quickly drifted as Buttler and Malan went to work, their accumulation clinical.

Now two-nil down in the first leg of the tour, Australia have now only defeated England at home once in their last 10 white-ball matches. The last T20 will be played on the same Southampton pitch on Tuesday before three one-day internationals at Old Trafford in Manchester beginning on Friday.

Giannis: Don’t call me MVP until I’m an NBA champion
Recent Posts
This website uses cookies to improve your user experience and to provide you with advertisements that are relevant to your interests. By continuing to browse the site you are agreeing to our use of cookies.Ok