Home » Sports News » Australia has the best cricket coaches in the world, so why are they winning titles for other countries?

Seven days can be a long time in politics and professional sport.

This week came with a rush for the England cricket team. No sooner had they ascended the T20 World Cup mountain, preparing to be feted, than they found themselves back at sea level, grinding away at the 50-over salt mines. No rest for the wicket, apparently.

Winners deserve to celebrate. After all, what is the purpose of playing? Hard work and extraordinary focus demand sacrifices; each and every team attempts those disciplines, whether they win or lose, but to the winners the spoils and the balancing of the sacrificial scales.

Australia’s failure to make the T20 semi-finals afforded most of their squad some extra downtime leading into the ODI in Adelaide on Thursday. Arguably the home troops were the fresher – physically and mentally. They won an entertaining clash on the back of early wickets and early runs. Australia’s attack ran remarkably similar to the T20 battery, and what a surprising delight to see Stephen Smith strap on the pads – he even remembered how to bat.

Pat Cummins’ ODI captaincy debut was strong and noticeable, just as his Test leadership has become.

The team has set sail for the 2023 ODI World Cup with a following light breeze, although questions are now being asked of the coaching crew. 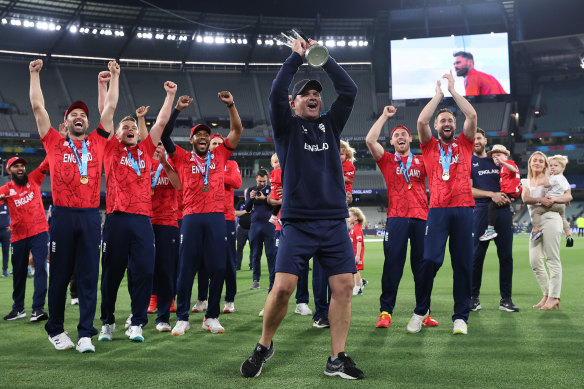 Head coach Andrew McDonald and his support staff could likely do with some R and R themselves. McDonald is in charge of three styles of the international game, responsibilities that other nations often share around. England have three Australians on their staff: head coach Matthew Mott, bowling coach David Saker and batting coach Mike Hussey.

Kiwi Brendon McCullum is England’s Test coach and he was resting after a long northern summer in which he introduced a fearless psyche to their game plans.

Australia were T20 champions because the players had come up with clever plans, which they executed fearlessly, but not recklessly. The defence of the title was tame but not unskilled. “Franchise-itis” is to blame.

Glenn Maxwell’s post-elimination comments about “moving on” were from the heart, but revealed much about the problems that led to failure. The mindset he reveals is one of a franchise roamer. The head coach has been at the IPL as player and coach, the main players are involved in multiple franchises around the world and certainly in those competitions teams follow the “move on from a loss” mantra. They don’t have time to mope over a margin, small or huge; they often have the same period as the England T20 champions to celebrate a win. The dogs bark and the caravan moves to another stadium.

Australia’s massive loss to New Zealand clearly cost them a place in the semi-finals. Had they made the top two in their group (on net run-rate) anything was possible. Australian teams over the years have had the handy knack of peaking at the sharp ends of tournaments. But they lost badly because they were in franchise mode: going hard all the way, trying to get 15 an over with the bottom half of the order in, not caring if they got bowled out cheaply … except this was an international competition with five preliminary games.

This was a failure of senior leadership and planning. Australia needed an experienced specialist T20 coach.

England now have both white-ball titles, both won with experienced coaches, both of whom happen to be Australians.

Trevor Bayliss was hired by England especially to improve their 50-over cricket: they wanted to perform well at the home World Cup in 2019, and maybe win the whole thing. Bayliss had taken Sri Lanka to a ODI World Cup final and the Kolkata Knight Riders and Sydney Sixers to short-form titles. Maybe his understated manner and failure to make controversial social media or press conference statements has kept him too far under the radar. He rarely rates a mention even in English cricket circles when that extraordinary ODI Cup win is recounted. He is not a self-promoter and shuns social media, preferring to let his record speak for itself.

Mott is another softly, softly coach who now has the unique achievement of winning two World Cups in one year, having taken Australia’s women to the 50-over title in April before being headhunted by England’s men.

I’m still amazed that Cricket Australia isn’t using Bayliss in a coaching mentor role and even consulting on the bench for big tournaments. His wise counsel may have made the difference. The opportunity now exists to have Bayliss firmly on board as the men’s team navigates toward next year’s ODI World Cup.

You cannot purchase experience for any amount of cryptocurrency, so if Australia are serious about
their rejuvenation then they will also get the most experienced elite coach in the country, Greg Shipperd, in the dressing room. McDonald has learnt at the feet of the diminutive Western Australian-turned-Victorian, through his time as a Victorian player. Now is the moment to formalise an arrangement. “Ronnie” McDonald has the potential to be a long-term national coach. Using proven mentors will hasten education.

England have poached Australia’s cricket intellect, and been proven wise. The brain drain need not happen because there is a wealth of knowledge and coaching nous on the doorstep and in the living room. McDonald is a co-operative and empathetic man. He can listen and grow with the veterans at each elbow.