Firstly, this was for the here and now. Dreamy Melbourne afternoon giving way to spectacular MCG night, some scintillating hitting and acrobatic catching, a vast crowd thrilling to it and a big and gleaming trophy at the end: who would not want to live in this moment? Who would not want to share in this day?

It was for the future, too. It was already changing, and fast and it will change more speedily now. Billie Jean King noted the other day the acceleration of the last two years in all women’s sport. In the last two weeks, it has gone up another notch. 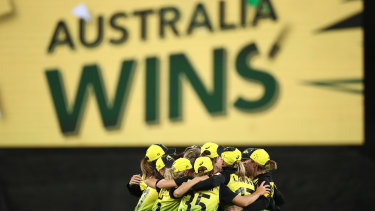 There’ll probably be a lull now, but it doesn’t matter. Evolution is never smooth and linear. Even the broadcaster hedged its bets this night. What matters is that women’s cricket in this country has reached and passed a watershed, rounded a point of no return, and it won’t ever go back. It’s on its own two feet now.

But this was also for all those who have gone before, all those who have toiled away in the far corners of empty parks, sustained and nourished only by their love of the game, in a time – in all the times – when it was thought a strange love for a woman.

It was for all those who had to wear skirts – culottes since you ask – and limp around in hand-me-down kit, and wield bats with splintered edges, and, no matter how good they were, always be introduced as someone else’s sister.

It was for all those who were asked sceptical questions, endured sideways glances, heard even when out of earshot the slights, sneer and allusions. “You play … cricket?!” 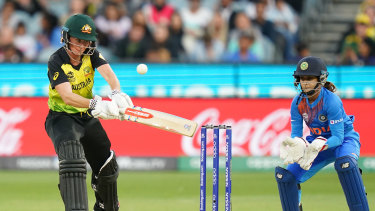 Top knock: Player of the series Beth Mooney played a key role once again for Australia.Credit:AAP

Was it over-hyped? Now it is done, we should admit it. The world record crowd push should never have been the point and became a needless distraction, and now in the aftermath, passe. The crowd was more than 86,000 and that was plenty enough, and no number of extra Perrys would have made a difference or given a toss. The occasion was its own hit song. As for the 5000 or so who didn’t come, they missed out.

What it was, was a command performance from Australia. If you think that is only because women’s cricket is hopelessly shallow, you haven’t been watching the rest of this tournament. You weren’t watching on day one at the Sydney showgrounds when India tangled Australia up in its own anxious intentions. This night, Australia disentangled itself, mentally, athletically and as a force.

The nerves, tautness and stiffness of the early matches were gone. When they might have shrunbk before this unprecedented occasion, they rose to it. Instead, it was India that found itself bound up. They began with three full-tosses in a row and two dropped catches within four overs. Their apprehension transmitted itself to the Australians.

Arguably, Alyssa Healy did what her partner Mitch Starc did in the men’s final here in 2015: won the World Cup with one gigantic wrench. By the time, Healy and Beth Mooney were done, this match could have only one outcome. The four wickets they lost were the wickets they had saved to spend. 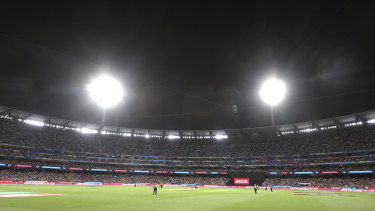 The mountain that was Australia’s innings made practically certain that India’s reply would be a molehill. That is how the limited overs cookie mostly crumbles.

But if a cricket moral has emerged from this tournament, it was that Australia will never have it this easy again.

In Australia, this World Cup has changed the conversation. Only among grumps, grouses and curmudgeons is women’s cricket now viewed and measured only in the context of men’s. Previously, perhaps only tennis, athletics and perhaps soccer attained enlightenment in this way.

The one thing that a woman can never be is a man. This an arrangement that suits most of them just fine, and most men, too. In many other walks of life, we celebrate the difference. In most walks, we’ve learned to give each their due in turn. On Sunday night, cricket did in the least uncertain terms, and all on International Women's Day.

Echoing Paul Keating from all those years ago, this was one for the true believers of all ages.

‘I think he’s in trouble’: Wade under pressure after lean series

‘I’d like to back it now’: analyst declares Cups star