It’s the ultimate dilemma for an aspiring Test cricketer: baby or the baggy green? But as far as Sean Abbott is concerned, his mind is made up.

Playing Test cricket for Australia was a childhood dream for Abbott but he will put the possibility of a Boxing Day Test debut on ice to be at the birth of his and partner Brier’s first baby. In fact, the decision was not hard at all.

“I don’t think that’s actually a question,” Abbott told the Herald and The Age.

Allan Border was famously batting during the Sydney Test in 1986 when the scoreboard broadcast a message congratulating him on the birth of daughter Nicole that afternoon. Times, however, have changed.

Former Australia captain Ricky Ponting missed a Test during the Sri Lanka tour in 2011 to rush home for the birth of his second child. Last summer, Virat Kohli did not play the final three Tests after flying back to India to be at the arrival of his first baby.

But Abbott’s situation differs from those cricketing luminaries in that his choice may involve a first Test.

The 29-year-old’s partner Brier is due to give birth on Christmas Eve. In the COVID era, leaving and returning to the team camp is not straightforward due to biosecurity protocols. 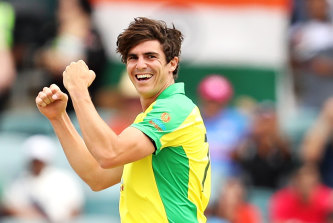 Sean Abbott and his partner Brier are expecting their first child on Christmas Eve.Credit:Getty Images

After James Pattinson’s shock retirement from international cricket last week, Abbott is closer than ever to breaking into the Test side.

The big three of Pat Cummins, Josh Hazlewood and Mitchell Starc remain Australia’s first-choice pace attack but with five Tests in six weeks, selectors have indicated a rotation policy is on the cards – unlike last season in the defeat to India.

Should the practice, used with great effect during Australia’s Ashes defence in 2019, be reinstated, the door would be wide open for Abbott to debut. Western Australia’s Jhye Richardson and perennial drinks waiter Michael Neser are also in the frame.

“[I’m] not going to risk putting into jeopardy the Ashes series by coming in as not a ‘clean’ athlete,” Abbott said.

“It’s not as easy as it used to be and that’s the world we’re living in at the minute. That’s just part of things now.

“It’s a bloody tough one, especially considering the safety concerns around COVID and borders.

“It’s certainly something I’ll have to keep a close eye on and play well enough to get selected. Should that happen I have to make sure I’m back in Sydney late December for the birth of my baby girl.

“We’ll just have to manage that as best I can and if that means maybe missing some time with the Test squad and an Ashes series then so be it. Hopefully, we get lucky and things work out.”

Opportunities for Australia’s fringe paceman have been scarce due to the form and durability of first-choice trio Cummins, Hazlewood and Starc.

Of the past 38 Tests, stretching back to the start of 2017, only four other quicks have worn the baggy green: Peter Siddle (five Tests), Pattinson (four), Richardson (two) and Chadd Sayers (one).

Abbott, who has been in domestic ranks for 11 years for nine internationals, may well be passing up the only chance he gets at Test level – but he does not see it that way.

“As much as it’s a dream of mine; I’m not 30 yet, my body’s going great, I’m feeling really fit, it’s not going to be my last game of cricket,” Abbott said.

“I know opportunities don’t come around very often, especially with the guys we have in the squad that have been playing, but it’s the birth of my first child.

“Hopefully it works out that she times her run nicely that we can tick all those boxes and have dreams come true in more ways than one.”

After several false starts, Abbott gets his first opportunity to push his Test claims in the Sheffield Shield on Wednesday, when his NSW side takes on another late starter Victoria at Drummoyne Oval.

Abbott enjoyed his best Shield campaign last season with bat and ball, claiming 21 wickets at 29 along with 570 runs at 63. He knows he has to maintain those standards to break into the Test side.

“The three quicks who have been playing for Australia are building strong cases to be part of the greatest cricketers we’ve had for our country with the ball – they’re still very much there and bowling well,” Abbott said.

“I don’t feel any closer because it doesn’t really change what I have to do, and that’s take as many wickets as I can whenever I bowl.”