Cricket Victoria chairman Paul Barker faces a fight to remain on the board and to retain the top role at what shapes as an intriguing secret vote at a board meeting on Monday night. 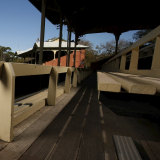 In a meeting that will also have implications for Cricket Australia chairman Earl Eddings, Barker's term has expired and he is seeking a fresh three-year run but is under pressure from a handful of CV's nine-member board.

The key vote will involve only the six elected directors, of which Barker needs a majority of four to remain as a director. However, only three objectors are needed to vote him off.

Barker does have his "old guard" supporters who point to the reforms CV has made under him since he took charge in 2018 but others question CV's lack of sponsorship, his lack of follow-up and why he has made no public comment amid this year's mass job cuts.

He could yet prevail but directors Peter Williams, Jane Nathan and Phil Hyde are set to vote against him, although sources said Barker's supporters were hoping Nathan would flip. But sources maintain Nathan, who has a long history in local government and was the first female elected to the committee at the Melbourne Cricket Club, is keen for change.

If Barker is removed, Williams and fellow director David Maddocks, the latter with the support of long-time friend Eddings, are expected to contest the chairmanship. There has also been speculation well-liked former Dandenong Cricket Club president Ross Hepburn, elected to the CV board only last week, could also run. This vote will involve the full nine-member board.

Williams has strong support. He has excellent credentials in corporate business and the cricketing world, having also been a former delegate of the Western Australian Cricket Association, and has been an agent of change in helping to modernise CV's antiquated methods. His position would have been strengthened had Essendon Cricket Club president Simon Tobin and auditor Amanda Bond been successful in their bids to join the board at last Monday's annual general meeting.

One scenario, perhaps unlikely, has Barker remaining on the board but losing the chairmanship. Should Barker be removed, it could open a vacancy for Tobin to join as an appointed director.

Sources say Eddings and Williams have met only on a few occasions. Eddings could find his long-term aspirations on the CA board under threat should Williams win the top role.

Those involved in the counting of the numbers say Hepburn, if he doesn't run for the top role, and fellow new face Penelope Cleghorn are likely to back Maddocks, who is also well liked within cricketing circles. Hepburn is also likely to have Eddings' backing.

Maddocks, a lawyer with Perry Maddocks Trollope Lawyers who has also been involved in the research of concussion in sport, also has strong support to take the chairmanship. Maddocks and Eddings are former chairmen of the North Melbourne Cricket Club, which became the Greenvale Kangaroos.

While Eddings has no longer garnered enough support from CV to be its CA nominee – he had to become an independent director to remain on the CA board – Barker has ensured he has at least had enough backing to hold his position as chairman and guard against NSW and Queensland, who are agitating for change and for the CA board to revert back to its former structure of greater state influence.

Classic hopes for Born With Pride

Barcelona make clear demand as Man Utd open talks to sign Dembele on loan
Recent Posts
This website uses cookies to improve your user experience and to provide you with advertisements that are relevant to your interests. By continuing to browse the site you are agreeing to our use of cookies.Ok