It’s a good thing the Australian men’s cricket team will start playing soon because they have not had a good pandemic.

What an unflattering contrast they, brooding and mutinous in their inactivity, have made with other sports. Weeks ago, Olympic athletes from every country, win or lose, were melting with gratitude for the simple privilege of being able to compete. Last weekend, five footballers played for the Penrith Panthers with broken or ruptured body parts, at the end of two seasons where participants moved heaven and earth so that they could play. For many sports around the world, it has been play or perish.

Meanwhile, cricket’s two oldest nations have been bickering like children over who gets the better bedroom while the house is burning down. One demands strict conditions and comforts before it will agree to play. The other has, for months, been too fussy about unmet conditions to play at all. All they have really excelled at, during the long hiatus, has been in the sport of white-anting their coach.

It’s a long time since we saw Australian male cricketers throwing themselves into an international series as if it was, literally, their last. Cricketers have been creative in finding reasons not to play … or maybe they’re just not into going to that place. So what? The game will go on for them, somewhere, sometime.

International cricket seems not to know how endangered it is. Even before COVID, the depth of talent across the world was as meagre as it had been in a generation. The hegemon, India, was stretching its loyalties between diplomacy abroad and the magnetic bonanza at home. The Big Three were in it for, and determined to play among, themselves. Australia’s list of countries it no longer toured for Test cricket had become longer than those it did.

How is Australia’s commitment to the threatened species that is international cricket? Forget the COVID effect. Australia last played Test cricket in South Africa and the UAE (against Pakistan) in 2018, in India and Bangladesh in 2017, in Sri Lanka and New Zealand in 2016, in the West Indies in 2015, and in Zimbabwe (remember them?) and Pakistan itself in 1999. 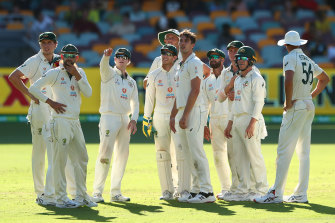 The shock series loss to India earlier this year was not the only low ebb for Australia’s men during the pandemic.Credit:Getty

The reasons for not going are all unique, often arguable, emanating sometimes from players and sometimes administrators; but the cumulative effect is of reluctance, anything but a desperation to remove obstacles and get on the field. For too much of the international cricket world, Australia’s attitude recalls the infamous statement of a long-gone administrator who claimed that we fully support all those other cricket nations, just not in the playing sense.

And that was before.

Since 2020, Australia has gained an international reputation for opting out. It declined South Africa’s invitation for a Test tour. Its best players, as a group, did not go on white-ball tours to the West Indies and Bangladesh. The performances on those tours was mostly dismal – in the West Indies you could see the evidence on TV, but from Bangladesh you could only read about it because broadcasters didn’t care enough to obtain the rights.

During the unedifying wrangle over the coming Ashes tour, some in Australian cricket criticised England’s team members, who have been doing what the Australians have not – playing cricket – for setting fussy conditions. True, it was weirdly high-handed for England’s chief administrator, Ian Watmore, to suggest that conditions had to allow a squad ‘befitting’ the Ashes to be sent, implying that if they couldn’t find enough first-choice players willing to undergo the privations of the bubble and the uncertainties of Australia’s federal system, then they wouldn’t send anyone. It was a poor negotiating statement when the game needed generosity of spirit. But the English counter-accusation that Australia are only willing to play international cricket on their own turf, under their own conditions (in every sense), was valid. Since 2020, Australia have accepted every reason not to play. They were in no position to criticise.

Our male cricketers are a reflection of us: jumpy, anxious, decreasingly willing to take a chance.

Meanwhile, the cricket world continued its long burn, like one of those Amazon forest fires that go on beyond human memory. New Zealand’s tour of Pakistan, which would have been the biggest fillip for the international game in more than a decade, was cancelled due to a security threat. England’s tour there, which would have been even bigger, was called off too. The vibe is that international cricket has forgotten about being mere custodians of the game, whose honour is to steward it well and pass it on to the next generation in a healthy state. Reasons not to tour are repeatedly seized with gladness and relief.

The comparison with the Olympic Games is sharp because it jars. Yes, Olympians only get one chance every four years and must treat every opportunity as if it is their last. Cricket? Oh, there’s always another tour. There’s always another IPL. With cricket, there are not too few contingency plans, but too many.

For decades, cricketers did tour anywhere they were asked, often under terrible conditions, because they couldn’t believe their luck. They could represent their country playing the game they loved! Sometimes they even got paid for it! Then there was the transition to the professional era with a saturated calendar where some still couldn’t believe their luck while others maintained the lip-service that every series and every tour was as important as every other, while growing steadily accustomed to the cushioning of long-term tenure and the luxury of picking and choosing tours.

Bubble fatigue is real and rife, but somehow it has less of an influence on participation in the Indian Premier League. Several Australians who did not go to the Caribbean or Bangladesh, to play for their country and bring world-class cricket to hungry audiences, instead fulfilled their commitments to the IPL. The wealth of the IPL has been figured as the bogeyman for international cricket, and it’s hard not to buy into that now. If it was all to prepare best for the World Twenty20, it hasn’t quite worked out for David Warner or Steve Smith, who have struggled to get a hit for their franchises. Australia would have given them a game.

At the apex of any sporting imagery, there is a balance of the human and the superhuman, the commonplace and the unprecedented. At its best, this mixture whips up its own magic. During the Olympic Games, we were often seeing very humble, everyday, recognisable people who were able, in their performance, to extend the bounds of possibility and stimulate our strongest emotions. Ordinary people who reflect us, doing extraordinary things that we could never dream of doing.

Image-wise, the elite level of men’s cricket has got this upside down. The dominant picture is of remote, extravagantly paid, neurotic individuals all too eager to avoid risk. Extraordinary people doing not much at all. Yes, our male cricketers are a reflection of us: jumpy, anxious, decreasingly willing to take a chance. In the coming months, with a world Twenty20 championship and the Ashes, they have the chance to be better, or else their legacy will be that of the custodians who didn’t fight hard enough to save their game, the generation who allowed international Test cricket to shrivel up.

Moore hopes this year's Derby can still be run at Epsom

Hollie Doyle boyfriend: Who is Tom Marquand and how did they meet?