Facebook has banned the sharing or viewing of our news articles on its platform. For independent journalism straight from the source, download our app and sign up to our newsletters.

A jump out down the straight at Flemington on Friday will help co-trainer Troy Corstens decide whether Swats That will again clash with September Run in the group 1 Newmarket Stakes.

After running third in the Lightning behind Nature Strip and September Run, the William Reid was proposed as Swats That's likely next assignment.

But in a change of heart, the temptations on offer on Super Saturday are proving hard to resist for the in-form Flemington trainers. 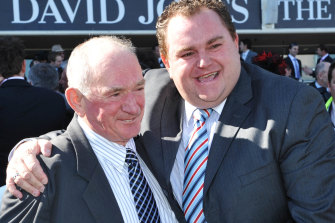 "She'll have another little go down the straight on Friday and I'd say then we'll make a decision, but I think we're leaning towards running in the Newmarket.

"It's just based on her and how she came through. We're very happy with her and although September Run is going to be very hard to beat, we're really happy with Swats That. There's not too many reasons why she won't head there."

But Corstens said he hasn't ruled out running her in both races. The Newmarket, on March 6, is held 13 days before the William Reid under lights at Moonee Valley..

"I do think she'll be better around a corner but when there's a $1.5 million group 1 on offer down the straight and you're one of the red-hot live chances, you can't not consider it.

"I know I'm toing and froing a fair bit but that's because we haven't made our mind up yet."

Ranting will definitely head to the William Reid in search of a group 1 win after finishing within three lengths of the joint winners of Saturday's Oakleigh Plate, while Corstens and his father Leon will also saddle up Zou Dancer in this weekend's Australian Guineas.

The Bennett Racing filly – one of 17 horses that the Corstens train for the syndicator – has risen rapidly through the grades after claiming her maiden win at Dunkeld in November.

"She was meant to run at Moe and we had a little bit of trouble with her in the gates," Corstens said.

"We went to Dunkeld and she didn’t win like I thought she would, let me tell you, but her run at Moonee Valley was excellent and her progression from there to Flemington was great.

"To do what she did the other day, at probably 85 per cent fitness, was excellent."

Despite winning the group 3 Vanity comprehensively last start, Corstens believes the top two horses out of the CS Hayes Stakes – Tagaloa and Aysar – will jump favourites on Saturday.

"I don’t know what Ole Kirk is doing and Crosshaven was a little disappointing on Saturday, so you’d think the boys out of the CS Hayes would be the ones to beat, apart from anything coming down from Sydney, which we don’t know about," he said.

"There's no way in the world we'd even think about it [running Zou Dancer in the Guineas] if she hadn't done what she did.

"It was kind of like a first-up run because she had that time off and just the one trial heading into it, so she’s come out of it with a good deal of benefit fitness-wise and she’s really come on from it."

Leading jockey Jamie Kah will ride Zou Dancer and Corstens said he wouldn't be dishing out any instructions.

"We just leave it up to Jamie. I reckon she knows what she's doing," he joked.

Yes Baby Yes, winner of the group 2 Angus Armanasco on Saturday, will next run in the Kewney Stakes.