It’s believed James McDonald is finalising plans to travel to Melbourne after Saturday’s Everest to ride Cox Plate favourite Zaaki, freeing up Williams to chase the light-weight ride on Anamoe.

Vin Cox, managing director of Godolphin Australia, said Williams would be a terrific partner for their star colt. 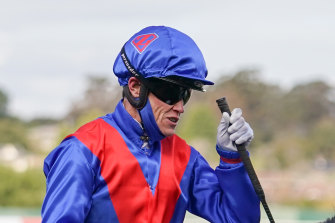 Craig Williams has lost the Cox Plate ride on Zaaki but will ride Anamoe in the great race.Credit:Racing Photos

“There’s not many around [that can ride light], and he’s an elite jockey, and we’ve had a good association with him over the years,” Cox said.

Anamoe drops back from 57kg in the Caulfield Guineas, where he ran against his own age group, to 49.5kg in the weight-for-age Cox Plate. Few of Victoria’s elite riders can get down under 50kg, but Williams won the battle.

Damien Oliver rode Anamoe to victory in Saturday’s Caulfield Guineas, but can’t get down to 49.5kg and is booked to ride import Gold Trip in the Cox Plate.

It’s been a busy time for Godolphin, who on Monday revealed that Trekking would represent their slot in Saturday’s $15 million Everest.

Jye McNeil’s name had been thrown around for the Cox Plate ride on Anamoe, but with Sydney’s premier hoop McDonald set to regain the Zaaki ride from Williams, Cox said the champion Victorian rider was a natural fit.

“There were various jockeys in contact; whether they contacted me or James [Cummings], there was a combination of the two,” he said.

“I didn’t talk to Willow directly; I’m not sure who rang who first. But he does a lot of homework, and he rides Moonee Valley very well, so we’re looking forward to getting to Cox Plate day.”

Williams had ridden Zaaki in two starts this preparation, winning the Underwood Stakes before running third in Saturday’s Might And Power Stakes. Zaaki drifted from $1.80 to $2.80 following his shock defeat in the Might And Power. But it’s believed McDonald will be given the green light to ride in the Cox Plate following a short quarantine stint in Melbourne. He rides Nature Strip in Saturday’s Everest.

The Godolphin colt, Anamoe, quickly moved into a $5 second favourite with the TAB for the weight-for-age championship after his devastating win in the Guineas.

The last three-year-old to win the Cox Plate was Shamus Award in 2013.