Brindisi: French champion Arnaud Demare claimed his third stage win in this year's Giro d'Italia when he prevailed at a canter in the seventh stage, a 143-kilometre ride between Matera and Brindisi on Friday.

Demare, who had already won the fourth and sixth stages, benefited from a perfect lead-out by his Groupama-FDJ teammates to beat triple world champion Peter Sagan by a bike length. 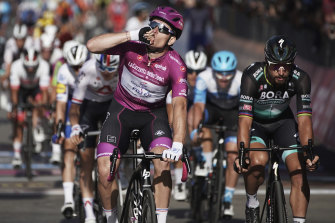 Frrenchman Arnaud Demare has starred in the sprint stages in the first week of the Giro.Credit:AP

"The work my team did was amazing," said Demare. "I waited a little bit and I launched my sprint at the right moment."

Ratings expert says Rothfire is short of Farnan, but can improve

Manikato Stakes: Brooklyn Hustle’s challenge to find an extra length
Recent Posts
This website uses cookies to improve your user experience and to provide you with advertisements that are relevant to your interests. By continuing to browse the site you are agreeing to our use of cookies.Ok