David Warner may be eligible for captaincy in Australian cricket as soon as the start of the Big Bash League after the Cricket Australia board commissioned a review of the code of conduct to allow for sentences to be commuted.

Still serving a life ban from leadership after his suspension as part of the Newlands scandal in 2018, Warner may now be able to lead the Sydney Thunder or even Australia, pending the result of the review.

Tellingly, the board decided that if the review of the code results in a fresh clause allowing for a penalty to be appealed, the outcome would be subject to a hearing before an independent code of conduct commissioner, in front of whom Warner would plead his case. 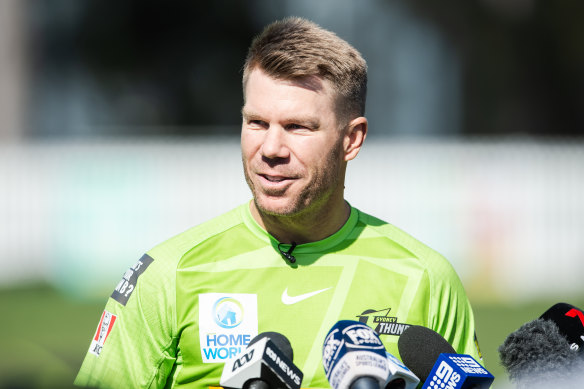 David Warner is back in the BBL after eight years, recently signing with the Sydney Thunder.Credit:Ian Bird/CNSW

“Cricket Australia’s board met today and among the items discussed was a possible amendment to the code of conduct in respect to long-term sanctions,” CA said in a statement.

“The amendment would allow a person to request a penalty that they had accepted be reviewed after an appropriate period of time.

“Currently the code states that once a charge and penalty is accepted, there is no avenue for review. The onus would be on the applicant to prove they had undergone genuine reform relevant to the offence they were sanctioned for.

“Any review would not revisit the original sanction, other than suspension of a penalty in recognition of genuine reform. The board has requested that the CA head of integrity propose an amendment to the code for consideration. It was agreed that should an amendment in respect to long-term sanctions be adopted, any review of a penalty would be heard by an independent code of conduct commission.”

The board had been compelled to debate Warner’s leadership ban after a request by the Sydney Thunder via Cricket New South Wales to see whether he might be considered as a possible stand-in captain for the Big Bash League club.

Warner signed to the Thunder earlier this year under a lucrative hybrid deal with the team and CA, after not participating in the BBL for a decade.

That agreement itself had indicated a warming of relations between Warner and CA, following dialogue in Pakistan earlier this year with the governing body’s chief executive, Nick Hockley, and the Australian Cricketers Association chief Todd Greenberg.

In 2018, the lifetime leadership ban had been imposed by CA’s board and enforced by its integrity unit under the code of conduct as a signifier of Warner’s purported role as “ringleader” of the sandpaper plot during the Newlands Test.

The original investigation by CA’s head of integrity, Iain Roy, had found that Warner instructed a junior player in Cameron Bancroft to try to alter the condition of the ball using sandpaper, then advised him how to do it.

After the plot’s exposure Warner had then, according to CA’s investigation, misled the match officials in Cape Town by not revealing his knowledge or involvement, and then failed to “voluntarily report his knowledge of the plan after the match” when interviewed about it by Roy.

Having initially considered life bans from playing for each of Warner, Bancroft and Steve Smith, the CA board ultimately chose to ban the two senior players for a year and Bancroft for nine months.

Warner’s leadership ban was the only penalty applied without an end date.