Sandrine looked a filly right out of the top drawer when following up her Royal Ascot victory in the Duchess of Cambridge Stakes at Newmarket.

Andrew Balding’s youngster caused something of a surprise when winning the Albany Stakes at 16-1 last month on soft ground – but she was even more impressive on this occasion on a quicker surface.

In taking her career record to three from three, Sandrine was given quotes around the 16-1 mark for next year’s 1000 Guineas – with Coral making her their 14-1 favourite.

Like at Ascot ridden by David Probert, the daughter of Bobby’s Kitten raced on the far side group, tracking Ellade on Hello You.

When the field bunched up with just over a furlong to go, Sandrine quickly shot clear and put the race to bed in a matter of strides.

Desert Dreamer made up plenty of ground from the rear to chase her home, but was beaten a length and three-quarters by the 11-5 favourite. Hello You was third, having been second to the winner at Ascot. 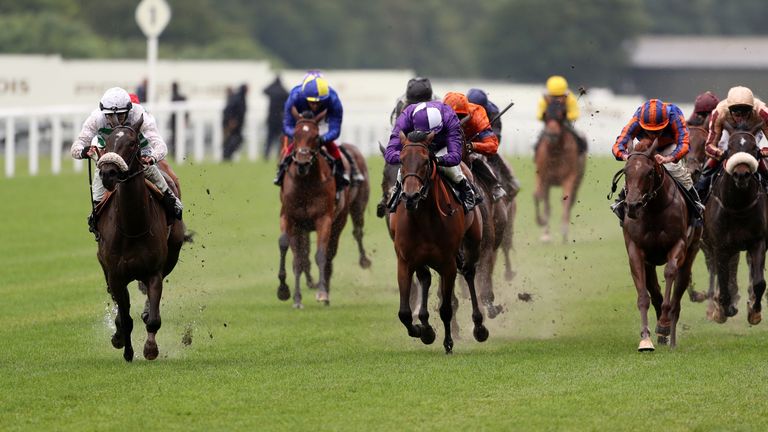 Balding said: “That was very good. She got a little bit lonely in front, I think, but she’s got a lot of ability, which is exciting.

“She’s so relaxed, which I hope bodes well for her chances of staying a mile next year.

“She’s got physical scope – she’s not a compact, two-year-old type. She’s got a bit more length and depth to her, I think. Hopefully she’ll make up into a nice three-year-old.

“It’s good she’s proved Royal Ascot wasn’t a fluke. There was a little bit of nerves going into this as she’d looked so good at Ascot and it’s nice to see that confirmed on different going today.”

Asked about future plans for the Kirsten Rausing-owned winner, Balding said: “We’ve loosely discussed it. I don’t really want to travel her at this stage and the only Group One options are in France and Ireland.

“I think we’ll just have to sit it out, give her a little break and try to gear her up for the Cheveley Park.”