Men’s Test cricket has always provided fertile ground for ideological debates. Who gets to play it, the amount they get to play, even how its played. All of which has ensured gatekeepers have been kept in business over the last 144 years.

In the last week we have had fraught exchanges over English techniques off the back of the men’s team’s humiliating defeat to New Zealand, followed by the reassessments of the World Test Championship structure and its continuation of attitudes systemic in the format that some series matter more than others.

As ever, looking across to the women’s equivalent is to see a group who yearn to be burdened by dogmas dressed up as “tradition”. But in the lead-up to Test match number 141 between England and India, news of a used rather than fresh surface through, well, forgetfulness was a reminder the appetite from the current generation of female cricketers to play the format is not reciprocated by the administrations great and small.

Which makes Wednesday at Bristol all the more heartening. Because while the pitch played true, it was the players who took the initiative to deliver an opening day that, even with the threat of rain over the next three days, has this one-off Test intriguingly poised with England 269 for six.

That their position should have been stronger was a testament to how momentous the day could have been. Heather Knight, in her 100th game as England captain, came within five runs of a second Test century. An immaculate hand seemed lost in her disappointment as she crouched on her heels and bowed her head to pray to whoever would take her call to return the on-field LBW decision as not out after calling for DRS.

The desperation was juxtaposed by the calm of the preceding 95 runs before that 175th ball. The half-century, from 115 deliveries (her fourth above fifty), allowed her side the initiative through draining India’s quicks, then the slower bowlers. The stage was set for domination, only for her surprise exit to bring an end to any potential revelry.

The measure of India’s shift is perhaps that, by close, it felt like the hosts had spurned the initiative. They were 230 for two before the off-spinning duo of Sneh Rana and Deepti Sharma combined to scythe through the middle order with five for 21.

Selection of both who turn from out to in against a one-to-eleven of right-handers seemed a misstep considering left-arm orthodox Ekta Bisht and leg spinner Poonam Yadav were options available to them that spin the ball the other way.

Their persistence was illustrative of a broader theme of seemingly losing sight of England up ahead only to slowly reclaim ground. Tammy Beaumont and Lauren Winfield-Hill played it safe, then played it like they’d done this for years.

A stand of 69 felt like an opportunity spurned, but what it contained, most notably Winfield-Hill blazing two sixes over the leg side boundary when Shikha Pandey and then Pooja Vastrakar dropped short on her way to a career-best equalling 35, was a lesson to those waiting to come in that runs were to be had.

It was heeded, to a point. Beaumont and Knight combined for 71 before the opener misjudged a bit of bounce to give Rana her first Test wicket and Shafali Verma her first catch at this level at bat-pad. The partnership between Knight and Nat Sciver (42) felt like a game-changer but only added 90 to the score. The allrounder’s missed sweep off Sharma was followed by a review that was matched for optimism and bested for drama when Knight sent hers up to the television umpire as well. 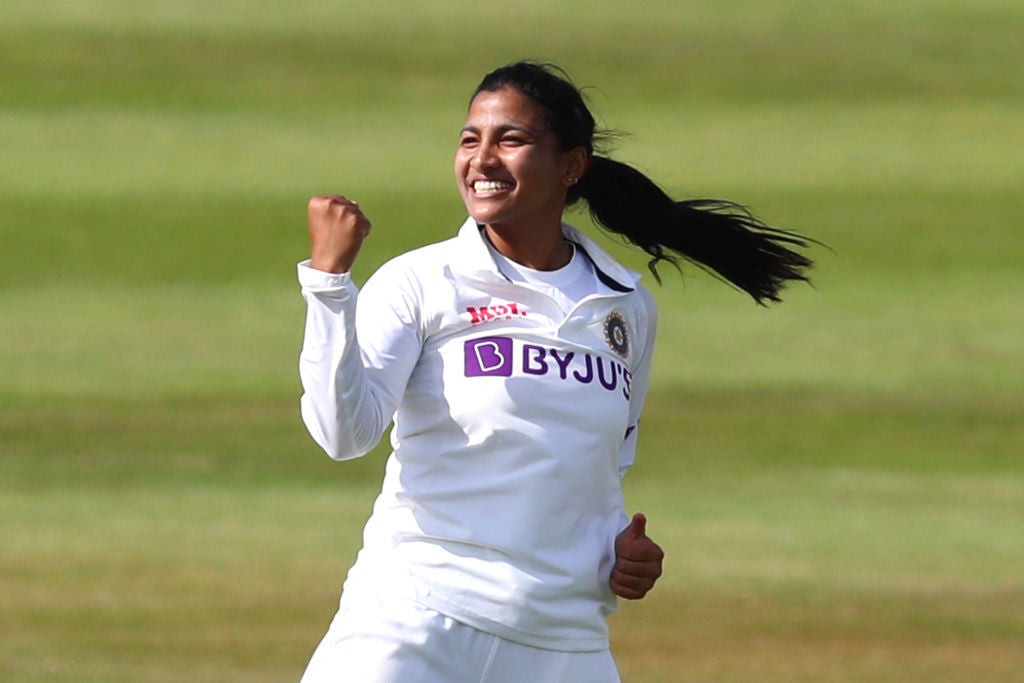 There will be a temptation to say that this was a quintessential day of Test cricket. And that is part of the problem when assessing the women’s offshoot. It has not had the exposure to grow and thus recent iterations have been vague facsimiles of how this format is supposed to be played: leaves, low strike rates and a ludicrous number of draws.

Really, though, we’ve not scratched the surface when it comes to how women could do Test cricket. Not necessarily better or worse – just different. And it was of some comfort that both sides knew what was required of them without the experience to fall back on. There are just five survivors from England’s last Test win at Perth in 2014, and the only debutant was a groundbreaking one as Sophia Dunkley, who remains unbeaten on 12, became the first black woman to play Test cricket for England. 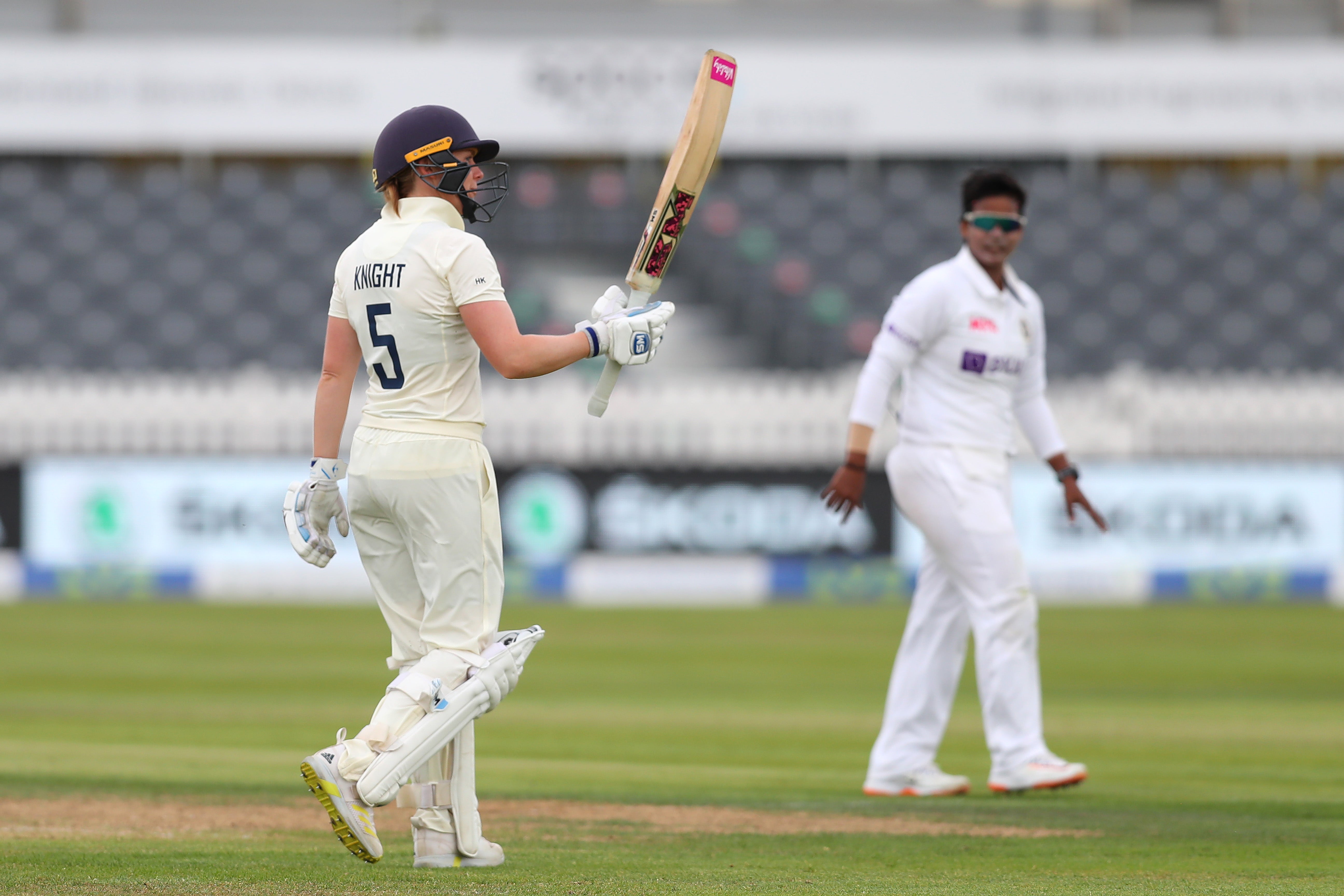 Heather Knight reaches 50 on Day One in Bristol

India’s XI boasted four debutants, and their general rawness to the format, having played their last one at the end of 2014 was evident on 88 overs. Umpire Sue Redfern noticed them squeezing an extra eight overs out of the old ball and reminded skipper Mithali Raj a new one was available to them. It was taken immediately.

With a slow pitch and the odd blind spot, we have a game on our hands. Another which could end up in a draw if the elements have their way, no doubt. But a day to file into the pros of women’s Test cricket. For all the rawness, the cricket was not at the behest of tradition but how those involved chose to approach it. By embracing their qualities rather than trying to fit the norms of the format.