There was a moment as Ollie Robinson walked to the fine leg boundary after the 25th over of day two to generous applause, that he probably felt quite good about himself.

It might not have felt totally normal. Certainly not as normal as things seemed on the field on day two as previous sexist and racists tweets were hung out for all to see. But with his accounts now locked, a statement issued and an ECB investigation pending, the story had moved forward. And as he placed the cap he only received on Wednesday morning back on his head after helping England reclaim ground in this Test, perhaps there was even a sense that after a restless night’s sleep and weary morning, he had finally found a happy place if only for a moment.

Because the cheers were warranted. A brace of wickets had added to his first-day tally of two for 50 and knocked New Zealand out of their commanding position. Having recommenced on 246 for three, they were reeling on 317 for eight, going on to blitz some late-order runs.

Robinson was on the cusp of continuing a match of emotional extremes by ending his maiden Test innings on the Lord’s honours board. That he did not was through no mistake of his own.

Stuart Broad, stationed at mid-off, was in play when Tim Southee clothed a drive in his direction. The catch was dropped, the etching of one of the more infamous five-wicket hauls held back. In the end, four for 75 was Robinson’s lot, and the wider implications of the spurned five-wicket haul meant that what could have been 324 for nine and a quick kill eventually saw New Zealand stumble to 378.

That, though, might be unfair to Devon Conway. Because with 200 of that 378 by himself, it’s clear that his waltz through from start to finish of the first innings was as smooth as could be. His 52.91 per cent of the team’s runs was shy of Charles Bannerman’s 67.35 (165 of 245) from the first event Test match way back in 1877. But there were still plenty of milestones for the 29-year-old to take with him as souvenirs. No visiting opener has as many runs in England since Graeme Smith beasted on behalf of South Africa with 259 back in 2003. He is only the sixth male player to mark his debut in this format – his first innings at this level – with a double-century. And the neatness of 200 was reflected in the fact that he is Test cricket’s 200th double centurion; the only coincidence in an innings where everything was within his control. 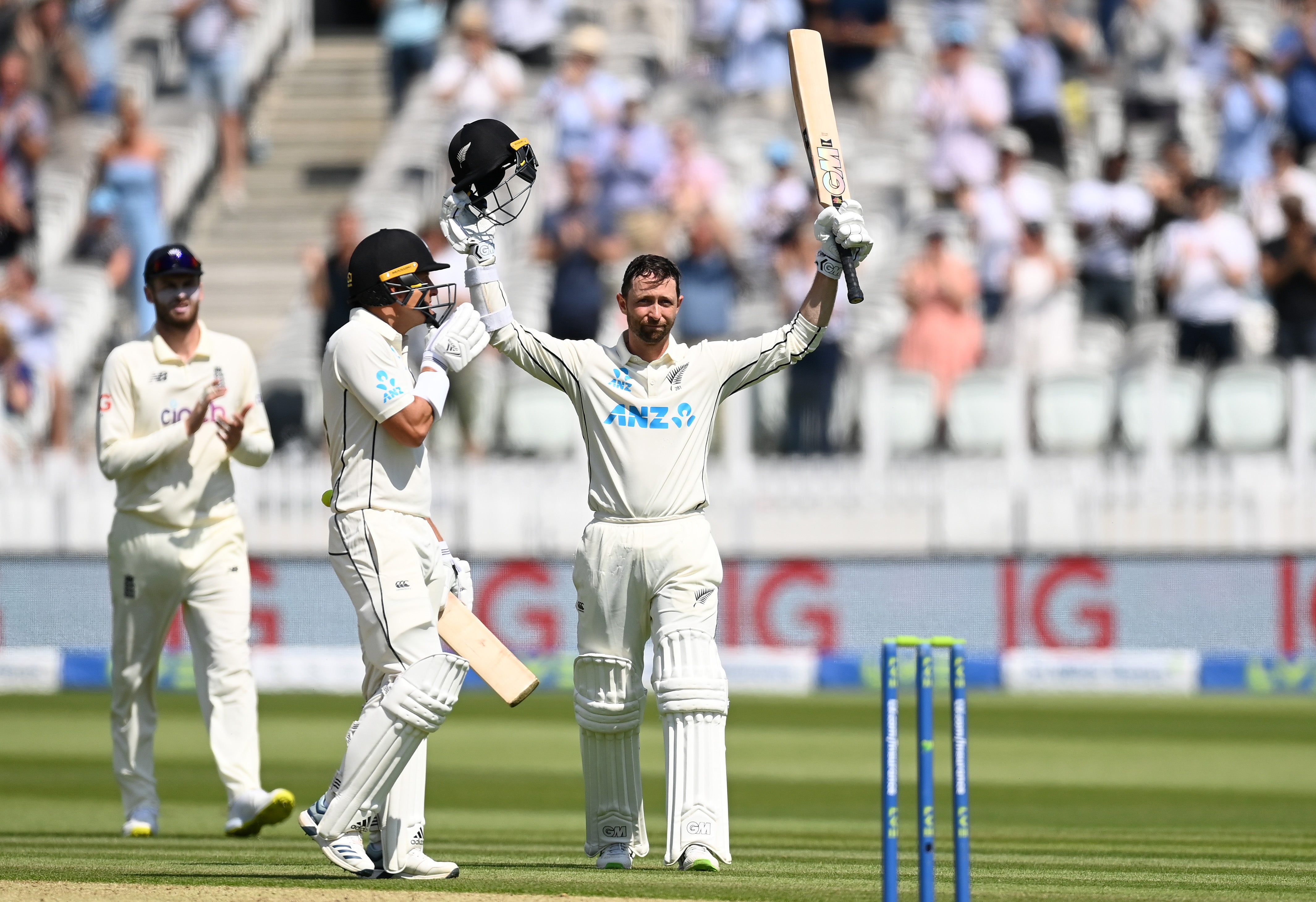 The left-hander’s ever-presence was deeply frustrating for England and, at times, he looked so unflustered that he encouraged ill-discipline of bowling standards and the usual irritation this bowling attack can be prone to when things are not going their way.

Nevertheless, they held firm and were deserving of the seven for 132 that closed out the tourists’ innings inside 123 overs. And that good work was rubber-stamped when Joe Root and Rory Burns chipped away 111 for the loss of just two. Though the rain forecast for Friday suggests conditions overhead will be less beneficial for batting as the previous couple of days, Burns (58 not out) and the captain (42*) are set enough overnight to cope with the expected change in conditions.

Rarely have England gone into a day desperate for so many different things to go there way. The match situation required a a strong showing to keep the game within reach. Then again, even a catastrophic one might have created a distraction of sorts.

“He’s going to try to concentrate on the cricket today,” said Mark Wood of Robinson during his BBC interview before the start of play. “If his head is in that space he can do the business again, like he did yesterday.”

The Durham quick was right, of course. But he went a step further by prising the door open and then kicking it down in a fierce spell that bagged him three wickets in 28 balls in a broader middle-order collapse of four wickets for just six runs.

Make no mistake, Wood needed something tangible from today’s play. The endeavour of 18 quick, at times brutal overs on day one saw no reward. But the bouncers that did not quite register beyond body blows got him into the match when Henry Nicholls, fresh from registering an 18th Test score over 50, hooked to Robinson in the deep to end a 174-run partnership with Conway.

BJ Watling was then squared up to send a catch fizzing into the hands of Dom Sibley at second slip, before Robinson trapped Colin de Grandhomme in front, with a review eventually confirming an LBW decision and a 10-ball duck. Mitchell Santner tamely bumped Wood to James Anderson at cover, and the latter picked up his second wicket of the innings when Southee was caught behind for James Bracey’s maiden catch as a Test wicketkeeper shortly after Broad’s fumble. 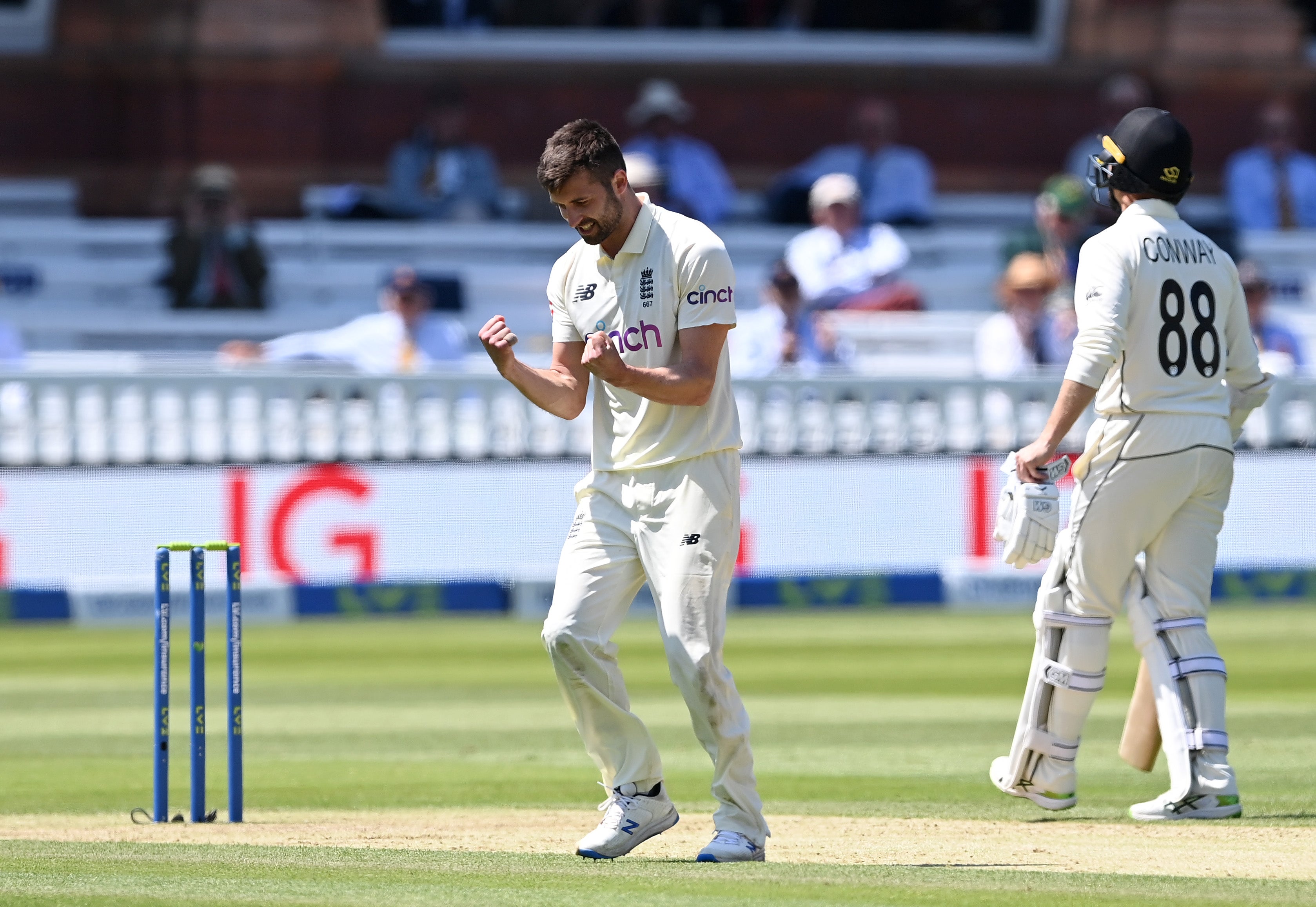 The final stand was equal amounts of swashbuckle and celebration. Neil Wagner showed off his high elbow by punching boundaries off the back foot, and even greeting a full ball from Broad with a crisp lofted straight drive over his head for six. A final insult for the 34-year-old who struggled to get into his usual rhythm and now has fifth consecutive wicketless innings to his name.

As entertaining as Wagner’s cameo was, there was a fear from those with Kiwi hearts that the risk was as much on Conway’s head as it was on the No 11’s. But not willing to be upstaged, Conway swung hard at a short ball from Wood to flail the only six of his innings and reach a crisp 200 from 347 deliveries. And though the opener did not carry his bat, it was fitting that he was eventually run out to underline that – after nine-and-a-half hours in the middle – the only misjudgement between the stumps was with his running.

This being England, there were always going to be top-order jitters. Though Sibley was unlucky to be given out on the field to a decision that showed both impact on the pad and the projected path to off-stump as “Umpire’s Call” a straight bat to Kyle Jamieson’s away-swinger could have saved him.

It was a similar delivery that did for Zak Crawley, though the blame and criticism upon him should be greater. Southee’s repertoire is well known, but this was by no means a killer ball for the set-up that preceded it. Wide and only getting wider, the tall opener was caught short of length and patience to flail an edge through to Watling.

But the calm was reinstated by Burns and Root, a 93-run stand allowing the evening session to drift off knowing the evening would be much quieter than the one before. Burns, who was left out of the last two Tests in India, took his domestic form into the international scene with a seventh consecutive first-class half-century. He’d do well to make that Test century number three, not least with the green tinge behind him and the blow to his right hand suffered by Root – worsening an existing issue picked up when he was struck in the nets at the start of the week.

Off-field matters will take more than 24 hours to sort. But on it, England were able to control the narrative and correct Wednesday’s mistakes.

Kameko to run in Epsom Derby as favourite after 2,000 Guineas victory

Late call on Cheltenham race for £100,000 bonus seeker The Shunter