England got off to a winning start on their World Cup tour when they sealed a thrilling eight-run win in the first of three Twenty20 warm-up internationals against Australia here today.

Jos Buttler and Alex Hales appeared to be blasting England towards a record-breaking total when they put on 132 in just over 11 overs here at the Perth Stadium but England faltered and posted a still competitive 208 for six when they should have reached 250.

Australia looked to be ahead of the chase when David Warner was in full flow but wickets fell at regular intervals and England held on when Sam Curran conceded seven from the last over when the hosts needed 16. 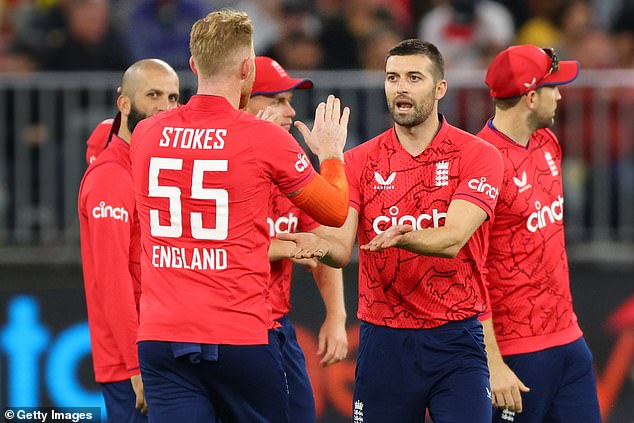 There was controversy, too, when Matthew Wade clearly obstructed Mark Wood and stopped him collecting a top edged catch off his own bowling with 39 needed off 22 balls but Buttler declined to appeal when invited to by the umpires and the Australian keeper stayed to almost win the game.

Buttler got his return to the side after injury off to the best possible start when he took Cameron Green for four boundaries in the first over after Aaron Finch had asked England to bat.

The captain showed no signs of any rust despite missing the last two months with a calf injury and was quickly unveiling his trademark ramp shot, taking Kane Richardson for four and then six in successive balls with the same extraordinary shot.

In contrast Hales, who admitted he felt nervous before the game after being preferred to Phil Salt, started scratchily but he did take Daniel Sams for three sixes on what looked a flat and bouncy drop-in pitch. 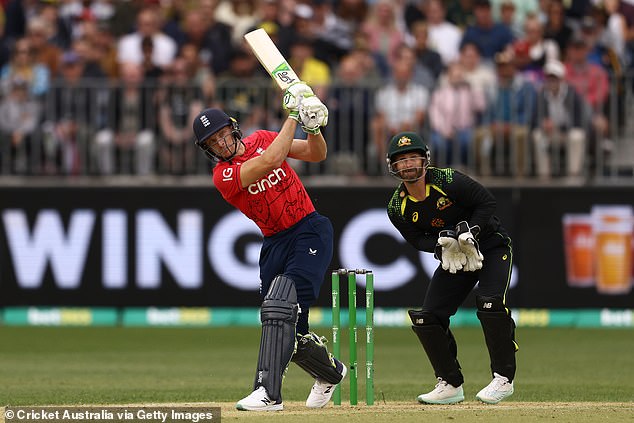 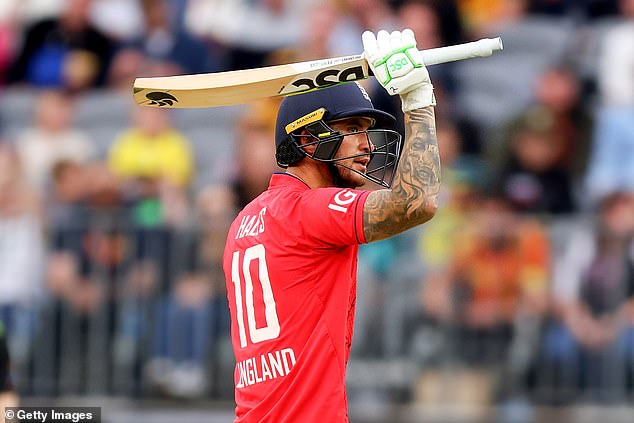 It was Buttler who threatened to propel England to a huge score, greeting the arrival of leg-spinner Mitchell Swepson with two sixes off his first two balls and racing to 50 off 25 balls as he reminded his side of his importance to their World Cup bid.

Hales, recalled to the England set-up after a controversial three-year absence when Jonny Bairstow broke his leg in a freak golfing accident, was only on a comparatively modest 26 when he had faced 21 balls but he accelerated to reach his 50 off 29 deliveries.

And when England had reached 128 without loss after 11 overs their record T20 score of 241 for three against New Zealand in Napier three years ago looked within their grasp.

But when Buttler, who had been dropped on 30 by a diving Mitch Marsh, fell for 68 off 32 balls after the biggest opening stand in T20 internationals in Australia England lost momentum. 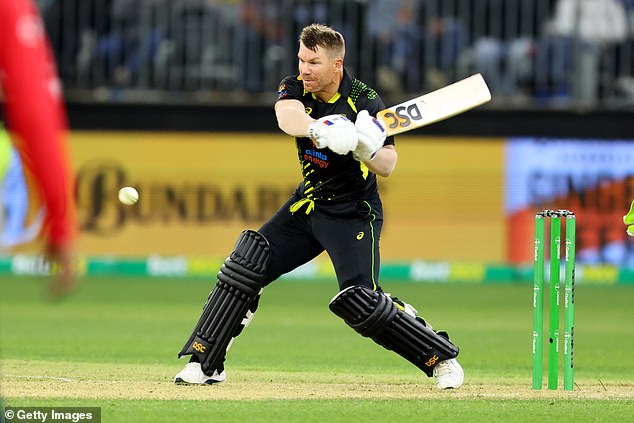 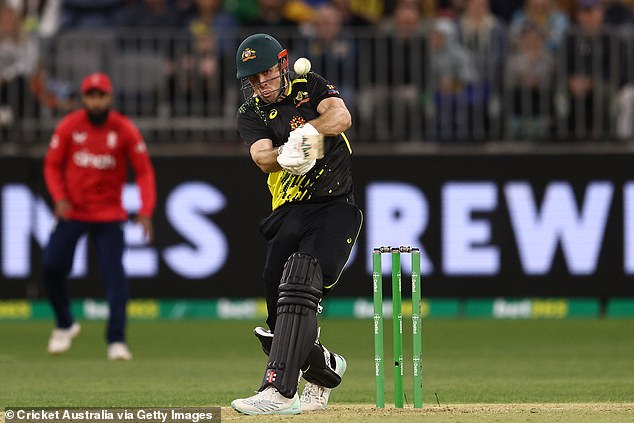 That enabled a weakened Australian attack, without Mitchell Starc, Pat Cummins, Josh Hazlewood and Adam Zampa, to grab a foothold in this first of three warm-up internationals before that World Cup.

Hales did go on to 84 off 51 balls but was annoyed with himself when he holed out off Richardson and missed the chance to reach his second century in T20 international cricket.

And England were left frustrated when they finished on ‘only’ 208 for six, Ben Stokes being hit on the head trying to reverse sweep the pace of Sams and making only nine off nine balls after being promoted to No3 on his first t20 appearance for England in 18 months.

They had tried to be flexible in pushing their ‘anchor’ Dawid Malan down to No7 but promoting their hitters backfired and England lost five wickets off the last six overs while scoring just 49 runs even though Chris Woakes did smash the biggest six of the innings in the last over off Richardson. 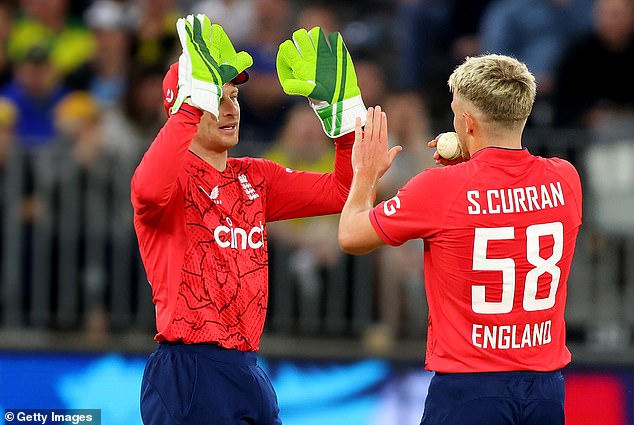 Australia had selected Green ahead of Steve Smith even though he is not in their World Cup squad and a rather odd decision looked all the more mystifying when he was out after a review for just one edging behind off Reece Topley.

Australia lost Mitchell Marsh, bowled by Adil Rashid’s googly, and Finch brilliantly run out by the combination of Sam Curran’s throw and nimble work by Buttkler behind the stumps.

But while David Warner was there Australia had hope and he found a willing accomplice in Marcus Stoinis who strong-armed 35 off 15 balls before he was well caught by a tumbling Malan off the extra pace of Mark Wood, who added Tim David in the same over.

England should have had the wicket of Wade in unconventional manner when he clearly obstructed Wood when he tried to collect the batter’s top edge but it appeared England did not appeal. 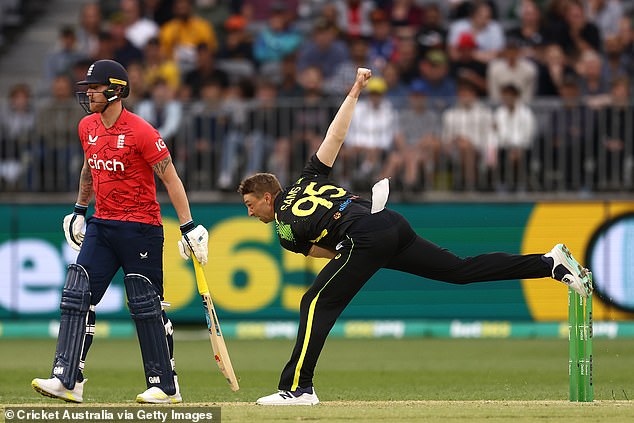 They made up for it in the same over when Wood claimed the key wicket of Warner, caught on the boundary by Hales, for 73 off 44 balls but then Curran missed thew chance to run out Sams when he kicked the ball at the stumps and missed with the batter well short.

Sams was eventually out when he hit Topley like a bullet towards the boundary only for Harry Brook to take a catch above his head that could easily have blasted through his fingers.

It came down to Australia needing 22 off the last two overs but Topley and Curran held their nerve to get England off to a winning start as they begin their build-up to a World Cup that will begin back here in Perth against Afghanistan on October 22.

Now these sides will meet again in Canberra on Wednesday and Friday before England finish their World Cup preparation with a final game against Pakistan in Brisbane.