BUMBLE ON THE TEST: England’s attacking tactics will work more often that not… and has Andrew Strauss rendered the Hundred a spare part?

Ollie Pope’s attempts to lead England out of trouble after the loss of early wickets were frustrated by rain which forced an early close to play on the opening day of the first Test against South Africa at Lord’s.

The 24-year-old brought up his half-century just before lunch, having played positively, and he was unbeaten on 61, with England 116 for six, when the rain came and the players were forced off at 2:09pm.

The weather did not ease up all afternoon before the end of play was finally called at 4.31pm.

Sportsmail’s DAVID LLOYD picks out his talking points from the first day of action at Lord’s. 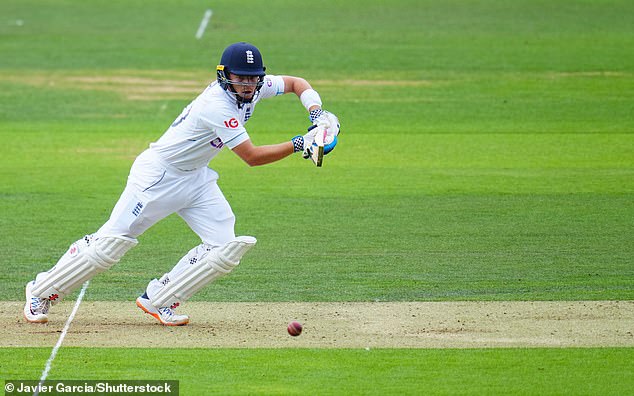 The phrase Bazball is one Brendon McCullum doesn’t care for and before this series it seemed as though Dean Elgar wasn’t keen on it either.

Yes, England will come unstuck playing this brand of cricket, as we saw on Wednesday, but monumental blocking doesn’t get you very far either.

England’s tactics will work more often than not…

You’ve got to bowl well too

… not that scoring rapidly is new in Test cricket. When I was England coach I would speak to my Australian counterparts who wanted to get them as quickly as possible so they had time to take 20 wickets.

It’s the same thing now, only Australia had two of the great bowlers in Shane Warne and Glenn McGrath to help make it work.

It was fascinating listening to Sir Andrew Strauss on the rise of franchise cricket on Test Match Special. He was passionate about the future and admitted he won’t please everyone with his high performance review.

But one thing struck me. He said the domestic structure in England should mirror the international game. So where does the Hundred fit in? We’re the only country who play it….

A tale of two Richards

So over to you Richard Thompson, new chair of the ECB. He’s an excellent man and will need to appoint an excellent new chief executive, too.

For me Richard Gould is the man. The pair were successful at Surrey and could sort our game out. I’m not all doom and gloom about the future yet, but I have started to worry.

The swing of things

An update on the bell ringing in my village. There’s clearly a knack to it. You have to get it swinging before you dong it. I’ve had one lesson from our leader Romford Kenny and I’ve been put on the No 3 bell, where I’ve been booked to make my debut in a blessing on Saturday. As the debonair Leslie Phillips (left) once said: ‘Ding dong!’

Before DRS, Joe Root would have got the benefit of the doubt over his lbw. The umpire would say: ‘It’s close, might have clipped leg stump, but I can’t be sure so it’s not out.’ Now we are trying to back the umpires so he’s gone. It’s tough and I wouldn’t have liked that decision, but if HawkEye is 100 per cent accurate it’s out.

Series may be short

It quickly became clear on day one what a potent attack South Africa have. They’ve got big strapping lads capable of real pace, and variation in the form of left-armer Marco Jansen. What a handful he is at 6ft 8in. Both teams have strong attacks and long tails. That means, if the rain stays away, we will have three short Tests.