Home » Sports News » Flying Solo in the Adonis at Kempton 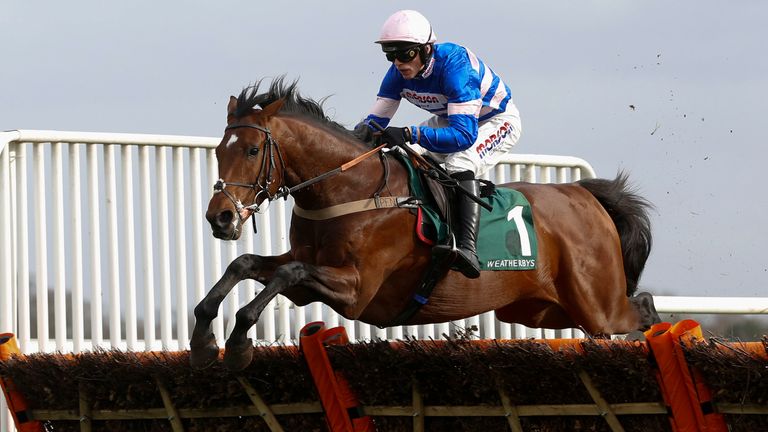 Solo thrust himself into the JCB Triumph Hurdle picture after demolishing his rivals on his British debut in the Weatherbys Cheltenham Festival Betting Guide Adonis Juvenile Hurdle at Kempton.

The four-year-old – who is still an entire – booked his ticket to the Cheltenham Festival as he proved a class above his rivals in the Grade Two prize, on his first start for champion trainer Paul Nicholls.

Front rank throughout the two-mile contest, the 6-4 favourite quickly put the race to bed early in the home straight, before crossing the line 13 lengths clear of the previously unbeaten Fujimoto Flyer.

Bookmakers were running for cover about his price for Cheltenham, and Nicholls said: “I’m obviously delighted. He showed us at home he was quite smart, but I wanted to see that sort of performance.

“As I said earlier with Pic D’Orhy, sometimes these French horses come over and you don’t know whether they have acclimatised, but he has.

“He has been a joy to train and does everything nicely. He is dead relaxed and did that impressively. He thrives on every bit of work you give him. The Triumph will suit him nicely.

“At the moment he would head up our juveniles and he is very smart. He will definitely have to run in the Triumph now, so fingers crossed he stays healthy over the next two weeks.”

The last time Nicholls completed the Adonis-Triumph Hurdle double was with Zarkandar back in 2011. However, the Ditcheat handler feels he has more in common with another of his former Grade One winners.

He said: “He is bigger and scopier than Zarkandar, as he was a Flat horse making his debut here, whereas he (Solo) won well at Auteuil the last day. I thought he was decent and he looks a proper horse.

“He strikes me of being in the model of Master Minded, as he is a big, strong horse that will make a lovely chaser one day.”

Talented dual-purpose performer Who Dares Wins added a victory over fences to his name with a battling success in the Betway Pendil Novices Chase.

However, the eight-year-old left that effort behind when getting the better off Southfield Stone by three-quarters of a length, to take the Grade Two prize at odds of 10-1.

Winning trainer Alan King said: “He is a very good horse. He is a marvellous animal and has taken us everywhere – Ascot, Cheltenham and Liverpool, the Northumberland Plate.

“It just all went horribly wrong at Plumpton the other day. He walked through the ditch, then he nearly got brought down. He is a soft ground horse on the Flat, but I don’t think he wants Plumpton heavy.

“We have waited and there are not many options, so we have had to come here today. Thank goodness they have had a dry couple of days.

“The plan was to probably not get to the front too soon, but when Paul’s horse (Master Tommytucker) fell four out, we nearly got brought down and we had to commit then, but he has battled on well.”

Although Who Dares Wins holds three entries at Cheltenham, King is unsure which direction he will go.

He added: “I want to go home and think about it, but I wouldn’t be afraid of going three miles with him.”

A trip to Aintree could be on the cards for runner-up Southfield Stone, according to Nicholls.