The value of an autumn group 1 for three-year-old fillies will be on show with the first clash of Flight Stakes and Thousand Guineas winners Funstar and  Flit in Saturday's Surround Stakes at Randwick.

Chris Waller opted to wait for the 1400m group 1 to bring Funstar back to the track. She will be giving up race fitness edge to Flit, who won the Light Fingers Stakes. 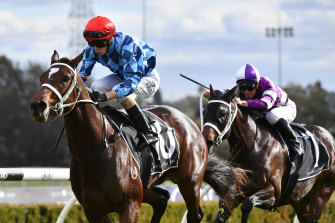 Funstar galloped on the course proper at Rosehill on Saturday morning and Waller, who has always held a high opinion of the Adelaide filly, was delighted.

“She is ready to go. I was very happy with that piece of work and the 1400m is perfect for her first-up,” he said.

The Surround is only in its third year as a group 1 and fills a void at the top level in the autumn over a sprinting trip for fillies. It gives them a focus and brings together several different formlines.

It will go a long way to deciding the champion filly of the season.

It will challenge the Chipping Norton Stakes as the main attraction on Saturday, especially with addition of New Zealand’s Probabeel to the fillies coming through the Light Fingers.

Jamie Richards could have a big day with Probabeel and Te Akau Shark likely to start near the top of betting for the group 1s.

They arrived from across the Tasman last week and Probabeel had a soft barrier trial at Randwick last Monday.

“Glen Boss was happy with the way she trialled. He said she was a professional that never touched the bridle and gave him a lovely ride,” Richards said. 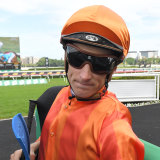 Blake Shinn is coming back to ride Dreamforce in the Chipping Norton Stakes on Saturday.Credit:AAP

“She had a decent blow and she has a bit of improvement in her yet. She had a week in the paddock after the Karaka Million three-year-old and we wanted to get her over there and get a trial into her. I think it stands us in good stead building into next Saturday.”

Shinn looking for a group 1 dream

Blake Shinn will return from Hong Kong on Saturday to try and get a group 1 for his old mate Dreamforce in the Chipping Norton Stakes at Randwick.

When Nash Rawiller failed to get a couple of days off his suspension at appeal on Thursday, trainer John Thompson had no hesitation in booking Shinn for Dreamforce and Sweet Deal in the Guy Walter Stakes.

“He has won on both horses before and knows them very well,” Thompson said. “It was an easy decision to bring him out because the owners wanted him and he is excited to be coming for the group 1.”

Shinn has had a frustrating first season in Hong Kong, riding eight winners and 30 seconds. He was aboard when Dreamforce won his maiden and was also in the saddle for his Liverpool City Cup victory 12 months ago.

Thompson has one more decision to make with Dreamforce: whether to put the blinkers back on after his narrow defeat in the Apollo Stakes.

“I will wait to see how he works on Tuesday before making that call,” Thompson said. “He relaxes mid-race without them and I feel that could be the difference at the end of a mile.”

Kementari back a gelding at Rosehill trials

Kementari will edge closer to a race return when he steps out during an interesting set of barrier trials at Rosehill on Tuesday.

The Godolphin five-year-old failed at stud and has been gelded and will be given another chance on the track. It is a great morning of trials, starting with Melbourne Cup placegetter Il Paradiso and Expressway Stakes winner Standout in the first heat.

Gun sprinter Santa Ana Lane has made his way to Sydney to trial, while there could be Golden Slipper implications with Peter and Paul Snowden-trained duo Sancy and Bartley also engaged.

Godolphin, meanwhile, are considering whether to persist with former boom two-year-old Tassort after a disappointing barrier trial at the beginning of the month.

The one-time Golden Slipper favourite is still at Agnes Banks but is spelling and may not be seen on the track again.