It’s probably heresy to even think it, but could the Pakistan Super League, a six-year-old six-team domestic competition, be the world’s strongest Twenty20 nursery?

Orthodox logic says no. Of course the Indian Premier League, the all-star pageant that claims to be cricket’s NBA, NFL and Champions League rolled in together, has raised the income of every participant and the standard of the 20-over format as a whole.

Innovation in cricket has been turbocharged by the IPL, where the best of the best are challenged to produce their best, under pressure, in an annual whirlwind of noise, music and dollars. If you’re not in the IPL, as Paul Keating might say, you’re camping out.

And yet the young Pakistan team, none of whom are permitted to play in the IPL, came up with another performance, this time in Wednesday’s T20 World Cup semi-final at the Sydney Cricket Ground against New Zealand, to suggest that the IPL is not, or not exclusively, where it’s at.

Whether it was Shadab Khan’s brilliant direct-hit run out of Devon Conway, the clever and varied bowling from the four-man pace attack, or the spin craft of Shadab and Mohammad Nawaz, Pakistan again proved that they play their Twenty20 cricket better than just about anyone on the globe. To cap it off, their two best-credentialed batters, openers Babar Azam (53 off 42 balls) and Mohammad Rizwan (57 off 43), finally opened the valves and set up a convincing victory. In the end, they were steered home by Mohammad Haris (30 off 26), one of their four under-23 youth picks, who has only played his cricket inside Pakistan and a mere 25 PSL games at that. On Sunday, Haris will bat at first-drop in a World Cup final. 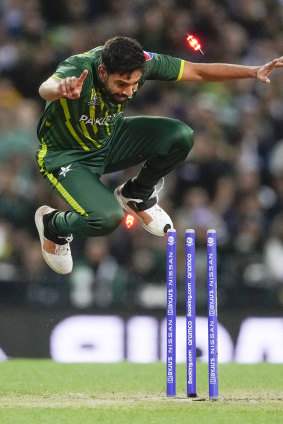 All 11 of the star-studded New Zealand team have IPL experience; none of the Pakistanis. Due to India’s ban on Pakistan players, which has been in force since the Mumbai terrorist attacks in 2008, the IPL’s first year, Babar’s team have had to grow their T20 nous either by finding gigs in Twenty20 leagues around the world or purely inside Pakistan.

Their youngest members of the current squad possess a tiny fraction of the T20 experience of their opponents in this World Cup. A few weeks ago, in the highlight of the tournament, Pakistan outplayed India’s galacticos for 39 of 40 overs at the Melbourne Cricket Ground. Their eclipse of the Kiwis brought to mind those old rugby league games when NSW Country came to town and, on this same patch of turf, towelled up the City glamour boys. When they do get a bit more exposure to this T20 caper, Pakistan will be pretty good.

Their most effective bowlers on Wednesday were left-arm beanpole Shaheen Shah Afridi (2/24 from four overs), the evergreen Haris Rauf (0/32) and teenager Naseem Shah (0/30). Rauf has played some BBL for the Melbourne Stars, Afridi nothing outside the PSL, Naseem only PSL plus a season in the Caribbean league.

As with several of their teammates, they are IPL squillionaires only in their dreams. Without the new-ball swing they have enjoyed in other venues, they tied down the strong Kiwi top order with excellent control of their lengths, a mixture of cutters and slower balls, and game plans as precisely tailored as if they knew the batters from years in the IPL.

The fielding – also brought up almost entirely on PSL fields – was as athletic as any seen in the tournament so far. Kane Williamson (46 off 42 balls) and Daryl Mitchell (53 not out off 35) batted only as well as the Pakistanis allowed, which is to say, more watchfully than they would have wished. New Zealand kept wickets in hand but were unable to convert them into runs. 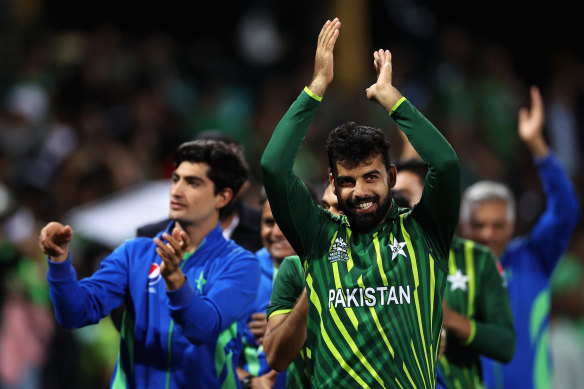 For a semi-final, it was surprisingly one-sided. Pakistan outclassed New Zealand as thoroughly as New Zealand had outclassed Australia here in the tournament opener last month and, like that game, this one was decided early. This coming Sunday in Melbourne, whether they end up playing IPL-rich India or IPL-rich England, Pakistan have a chance to make their point in the most definitive way.

So what gives? Pakistan won a T20 World Cup in 2009, before 13 years of IPL exclusion set in. Now they have a chance to win their second, against India or England. Does Pakistan’s quality suggest that the IPL is not quite the cut above the rest that it ought to be, or has the PSL snuck beneath world cricket’s radar to be, pound for pound and rupee for rupee, the best school for this form of cricket?

As long as India maintains its political ban on Pakistan players, the question will remain unanswered. International players, including Australians, who have participated in the PSL have been saying quietly for a few years that the cricket there is on par with the IPL. As thousands of Pakistan fans kept standing in lines outside the SCG long after the start of play can testify, they have had to learn how to wait and to be cut out of the magic circle; and while waiting, to make their sport in their own way. Once they got in, both on the field and off, they were the dominant presence.

Flying Solo in the Adonis at Kempton

Min bids for another John Durkan at Punchestown