Jockeys are the bravest athletes. There is no other sport where the ambulance follows them in the field of play.

About an hour after being involved in a horrific fall in the opener, champion jockey Hugh Bowman, nursing some painful ribs, was back in the saddle riding Senor Toba to an impressive win in the Group 3 $160,000 Frank Packer Plate (2000m) at Royal Randwick on Saturday.

“I’m a bit tender but it feels better when I’m riding,’’ Bowman said.

“It was pretty nasty, it could have been a lot worse but I’m thankful for that. It took me 15 minutes to regather myself but I’m OK.’’

Bowman’s mount Rothenburg had crashed heavily to the turf in the TAB Highway to start the Randwick program.

Sadly, Rothenburg suffered a catastrophic leg injury in the incident but Bowman was able to walk away with only bumps and bruises.

The Hall of Fame jockey did not have a ride in the second race and was assessed by doctors before being declared fit to continue riding.

Chris Waller, trainer of Senor Toba, marvels at the courage of jockeys like Bowman.

“Jockeys are tough, they are so brave,’’ Waller said.

“It is very sad what happened (to Rothenburg) but jockeys like Hugh get back up after a fall and get on with it.

“I actually said to Hugh before the race that Senor Toba is a lovely, quiet horse, he won’t pull and it will give you a gauge as to how you are. Hugh said I feel pretty good and goes out and gets the job done.’’ 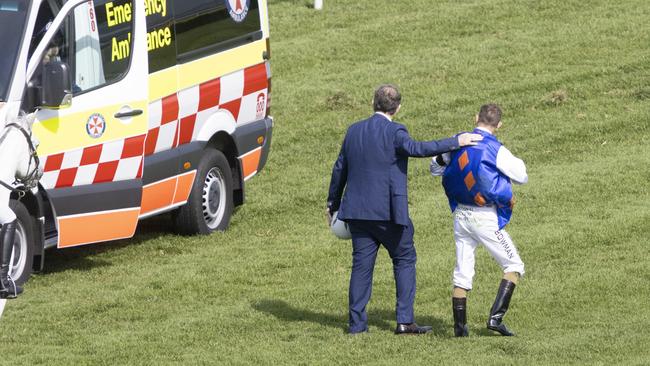 Bowman was at his best on the striking grey Senor Toba ($26) who finished powerfully to score by a widening one-and-a-quarter lengths from High Supremacy ($3.20) with early leader Achiever ($26) close up in third.

Favourite Lion’s Roar ($2.15) was coming back in distance from his minor placing in the ATC Australian Derby and didn’t quite have the sprint in his legs as he finished fourth, nearly three lengths behind the winner.

“He had a lovely run but just wasn’t at his best today,’’ said Brenton Avdulla, rider of Lion’s Roar.

“But he’s still ran well and has had a really good preparation.”

With Lion’s Roar’s three-year-old season coming to an end, Senor Toba’s is only just starting with Waller having designs on a Queensland Derby campaign.

“We even thought South Australian Derby but that comes around a little bit quicker, that’s only two weeks away. We had in the back of our minds that it would be one of the two.

“He is a lovely type, works with you, does everything right. He won his second start at Moonee Valley and we gave him a bit of a break to get him ready for these races later in the season.

“I thought South Australian Derby but he showed to me he might be able to go the Queensland Derby path with a bit more time.” Bowman said he was nursing some sore ribs as he rode Senor Toba to victory in the Frank Packer Plate. Picture: Getty ImagesSource:Getty Images

Senor Toba, a $180,000 yearling purchase at the Melbourne Premier Sale two years ago, scored his second win from just four starts and is an emerging stayer with a promising future.

“He’s a lovely horse with a really good action and attitude,’’ Bowman said.

“He gave me a really good feel and appreciated that tempo. Then when Craig (Williams, Khoekhoe) made a bit of a mid-race move, it injected a bit more pressure into the race which worked into his favour.

“I don’t like to get too far ahead of myself and don’t like to suggest races for horses too much but this horse has Queensland Derby written all over him on what I felt today.”

After the first race, trainer Danny Williams summed up the mood after the opener: “You don’t like winning when that happens.”

Ahead Start, trained by Williams, had just won the TAB Highway at Royal Randwick but the race was marred by a shocking fall halfway down the straight.

Hall of Fame jockey Hugh Bowman, rider of Rothenburg, had clipped the heels of Redicon and crashed heavily directly in front of the grandstand.

Veterinarians and club officials were quickly on the scene but it was very obvious that nothing could be done to save Rothenburg.

Williams, who lost his promising young sprinter Hot ‘N’ Hazy, in a race fall at Rosehill last winter, could understand the emotions being felt by Rothenburg’s trainer Joe Cleary and the gelding’s owners.

“I feel for Joe and the connections of the horse,’’ Williams said.

“I’m a bit upset for them now. I know what trainers and staff go through with their horses and it is not good to see that sort of things.’’ Ahead Start wins the first race which had a sombre postscript. Picture: Getty ImagesSource:Getty Images

The Rothenburg fall took the gloss off a very competitive TAB Highway where less than a length covered the first four over the line.

Ahead Start ($5), ridden by James McDonald, finished strongly to score by a half-length from Bellastar ($20) with King’s Trust ($26) a close third, just in front of More Sundays.

The previously unbeaten Ceasefire was sent out the $4.40 favourite but after racing on speed he faded under pressure to finish only seventh.

Ahead Start was having only his fourth start, scoring his third win and Williams has designs on setting the young sprinter for the $1.3 million The Kosciuszko on Everest Day at Royal Randwick during the spring.

“We have a long-term plan to get him ready for The Kosciuszko,’’ Williams said.

“I might give him another run and then try to achieve what Brett Cavanough did with It’s Me (Kosciuszko winner) last year.

“Whether this horse has the same scope, he has only won a Highway today, remains to be seen but he is only a three-year-old and has a lot of improvement to come.’’

Williams said Ahead Start had been a very slow learner and showed hardly any ability early in his career.

“I remember two weeks before his first barrier trial we were about to sack him,’’ Williams said.

“He is not a very good trackworker but he has come a long way. He’s a promising young horse.’’