Matthew Wade's future in the baggy green hangs in the balance after another failure, as selectors face the first of several major calls leading into next summer's Ashes.

National coach Justin Langer is craving stability in the team but Australia will finish the series having axed two of its top six from the first Test and with question marks hovering over incumbent duo Wade and Marcus Harris. 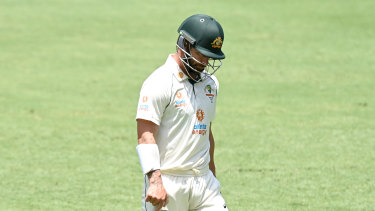 Matthew Wade, dismissed for a duck in the second innings, is fighting for his place in the team.Credit:Getty

Selectors admire the tenacity, versatility and team-first attitude of their Mr Fix-It but know runs are a batsman's greatest currency – and he is short of them with 173 at 21.62 this series.

"I think he's in trouble moving forward," Test great and former selector Mark Waugh said on Fox Cricket. "He just hasn't got the weight of runs to hold his spot."

Since his recall at the start of the Ashes, former wicketkeeper turned middle order batsman Wade is averaging 31.6 and has not reached 50 in his past 14 innings. His career mark has fallen below 30, a pass mark for a wicketkeeper but not a Test No.5 or six.

Former vice-captain Travis Head is the next player in line after being overlooked for Wade for the Sydney Test, a move criticised by South Australia coach Jason Gillespie.

Test squad member Moises Henriques is another contender while Nic Maddinson and Ben McDermott also have claims after being picked for Australia A.

"It's been a disappointing series for Matthew Wade," Hussey said. "He's played well at various stages through the series and got good starts but hasn't gone on with it. He's thrown away his wicket a couple of times, got a couple of good balls here and there, but he'll be disappointed with his statistics at the end of the series with the bat.

"Unfortunately it's probably going to get people talking about his place in the team. We're not sure what the future holds for Matthew Wade."

Warne agreed, saying "I'm sure his spot will come under a bit of pressure".

There are also issues at the top of the order for Australia, with only two half-centuries scored by their openers this series.

Called in to replace Will Pucovski, Marcus Harris did not seize his chance with scores of five and 38. The left-hander has dominated Shield cricket but, with a Test average of 24 from 10 games, doubts remain over his ability at the top level.

Pucovski's short-term future is unclear due to a shoulder injury while Warner has not fully recovered from his groin strain and played the final two Tests under duress.

Pakistan forced to follow on after Anderson takes five